The two ‘bad banks’ that are too big to fail

On two different continents, two of the world’s biggest “bad banks” are about to be rescued in state-sponsored and funded bailouts. For one of them, the world’s oldest bank, it’s for the third time.

One of them, China’s teetering Huarong Asset Management, isn’t actually a bank but, ironically, was established to manage a huge pile of bad loans made by China’s state-owned banks in the 1990s. 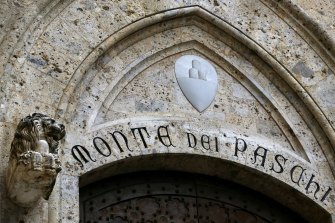 Italian governments have demonstrated a “whatever it takes” attitude to keep the 549-year-old Banca Monte dei Paschi di Siena afloat.Credit:Bloomberg

The other, Italy’s Banca Monte dei Paschi di Siena – founded in 1472 – is facing its third taxpayer-assisted rescue since the global financial crisis.

After Monte dei Paschi emerged as Europe’s worst performer in its latest round of bank stress tests last month, the Italian government has been negotiating a sale of the state-controlled bank to Italy’s biggest bank, UniCredit, that will involve substantial taxpayer funds and exposures.

In both cases the institutions have been regarded as too big to fail.

Huarong was established along with three other similar entities in the aftermath of the Asian financial crisis (Cinda was one of them) to manage the bad debts of China’s Industrial and Commercial Bank but, like some of those peers, expanded wildly and well beyond its charter into large-scale quasi banking.

With about $US242 billion of liabilities, including about $US40 billion of bonds, about half of them traded offshore by international investors, the group is heavily entwined with other Chinese financial institutions within a system and economy that is over-leveraged and riddled with bad debts. There has been a rising tide of defaults by stated-owned enterprises on their bonds over the past year.

There’s little doubt that Huarong has been seen by Beijing as having systemic importance and that allowing it to fail – and Beijing has been showing a greater willingness to allow its state-owned enterprises to fail recently as it seeks to improve the financial disciplines and reduce the leverage within the sector – would send shockwaves through the financial system and markets.

It had the potential to provoke a new China-centric Asian financial crisis, given the prospect that global investors would take fright and, fearful of the ripple effects, dump their bond holdings in the region indiscriminately.

The plight of China’s Evergrande group, with the world’s most debt-ridden property group engaged in a desperate firesale of assets to raise cash to meet bond repayments, would have contributed to the fear of the consequences of an Huarong collapse.

Having deemed that they are too big to fail, the governments have created blankets of moral hazard over their larger institutions and, in China’s case, state-owned enterprises in particular.

A failure of Monte dei Paschi may not have been such a severe threat to Italy’s banking system, although a collapse of the country’s fourth-largest bank could have significant spillover effects, especially for smaller banks.

Successive Italian governments, however, have demonstrated a “whatever it takes” attitude to keep the bank afloat.

The seeds for the bank’s continuing problems were sown in 2007, just ahead of the financial crisis, when it paid massively over the perceived value of Banca Antonveneta – about €9 billion ($14.5 billion) – to acquire the ninth-largest of the Italian banks at the time. Its first €1.9 billion bailout occurred in 2009 at a moment when governments across Europe, and elsewhere, were using taxpayer funds to prop up their faltering banking systems. 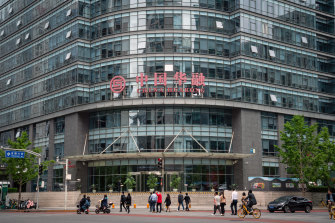 There’s little doubt that Huarong has been seen by Beijing as having systemic importance and that allowing it to fail would send shockwaves through the financial system and markets.Credit:Bloomberg

The second government rescue, in 2017, was more controversial because by then it had emerged that the bank had engaged in a number of disastrous derivatives trades to keep massive losses –about €730 million – off its balance sheet. Criminal charges against the bank and some former executives are still afoot.

That bailout cost taxpayers €3.9 billion and private investor’s a similar amount to recapitalise the bank and left the Italian Ministry of Finance holding a clear majority of its shares.

It was particularly controversial because the European Union had responded to the near-collapse of its banking system during the 2008 crisis with rules for how bank failures should be resolved that were designed to reduce the incidence of taxpayer-funded bailouts by “bailing-in” private shareholders and bondholders as the option of first resort.

With ordinary retail investors (with a particular concentration of them in its home market of Siena) holding much of Monte dei Paschi’s capital, and the scale of the bank’s non-performing loans certain to wipe out that existing capital base, a bail-in was neither financially nor politically feasible.

So, it was bailed out.

The negotiations with a reluctant UniCredit provide an insight into the scale of the bank’s problems.
It appears the government will inject several billion more euros into the bank ahead of a sale, which could be effected through a share swap with UniCredit to avoid weakening its capital ratios, with the government taking Monte dei Paschi’s non-performing loans and indemnifying UniCredit against other losses, including litigation relating to the bank’s past actions and disclosures.

In both Huarong and Monte dei Paschi, the level of state ownership and involvement will have complicated the responses to their latest crises – Italy could, and perhaps should, have allowed Monte dei Paschi to fail in 2017, if not earlier.

Having deemed that they are too big to fail, the governments have created blankets of moral hazard over their larger institutions and, in China’s case, state-owned enterprises in particular.

The issue is especially acute for China because Huarong was seen as the biggest test of whether the long-held assumption that the big state-owned enterprises carried implicit guarantees from the central government still holds.

The bailout of Huarong has reassured investors, particularly the foreign investors in the offshore markets for Chinese corporate bonds, that the absence of an explicit guarantee doesn’t mean the government won’t intervene to stave off a corporate collapse. 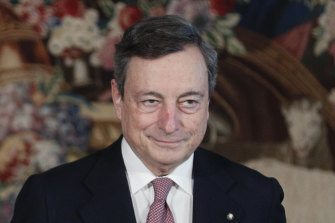 Italian prime minister Mario Draghi was governor of the Bank of Italy when the central bank approved Monte dei Paschi’s 2008 acquisition of Banca Antonveneta, the deal that effectively broke the bank.Credit:AP

While it’s not stated-owned, Evergrande mighty provide another test of the thesis, given that if it can’t stabilise its financial position a failure would threaten China’s massive, and massively leveraged, property development sector.

In any event, there will be relief (and some profits, given the discounts to faced value at which Huarong debt has traded over the past year) for bond investors and a lessening of the sense of imminent crisis that Huarong’s woes and those of other overly-indebted Chinese companies had generated.

Better supervision and control and earlier intervention – Huarong’s former chairman, Lai Xiaomin (subsequently executed for bribes and corruption) said he was subjected to absolutely no oversight –could have significantly reduced the scale of the losses and the systemic implications of a failure of the institutions.

Italian prime minister (and former president of the European Central Bank) Mario Draghi would be more conscious of that than most as he tries to finalise the deal with UniCredit.

As governor of the Bank of Italy until 2011, he was ultimately responsible for the central bank’s approval of Monte dei Paschi’s 2008 acquisition of Banca Antonveneta, the deal that effectively broke the bank.