The warming planet is about to revolutionise how banks define risk

It’s increasingly likely that banks will face new capital requirements that will reflect how exposed their loan books are to climate change.

“That is the logical next step,” Janine Dow, a senior director for sustainable finance at Fitch Ratings, said in an interview. “Because once you size a problem, then you identify the risk. And as a regulator, you can’t just leave an emerging risk exposed.” 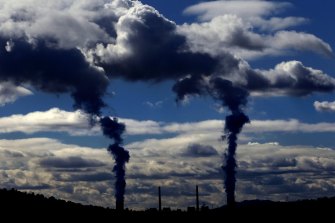 Since the Paris Climate Agreement was struck in 2015, lenders globally have poured more than $4.7 trillion into fossil fuel financing.Credit:Jonathan Carroll

Such a requirement would mark a significant expansion of new rules that the financial industry is now facing amid a race against time to prevent an environmental catastrophe. The goal is to force banks to channel money away from those corners of the economy that pollute and toward businesses that have committed to lower carbon emissions.

For now, banks remain a long way off that goal. Since the Paris Climate Agreement was struck in 2015, lenders globally have poured more than $US3.6 trillion ($4.7 trillion) into fossil fuel financing, according to data compiled by Bloomberg. Only this year has green bond and loan financing taken the lead.

Reading between the lines

According to Fitch, the financial industry is well aware that bank capital requirements will soon reflect climate risk, even though regulators themselves haven’t yet spelled out their intentions.

“Regulators haven’t been more explicit yet because they don’t have the data to justify a clear approach,” said Monsur Hussain, a senior director for financial institutions at Fitch.

But “if you read between the lines” of the European Central Bank’s November guidelines on climate-related and environmental risks for banks, “that is the direction of travel,” he said.

In the guidelines, the ECB instructs banks to consider their sensitivity to climate risk when weighing how much capital they need beyond minimum requirements; with this so-called Pillar 2 exercise, mandatory requirements have “already made landfall,” Hussain said.

“The only question is, how long will it take to make landfall on Pillar 1,” which represent banks’ minimum requirements and is “the key metric by which regulators decide whether a bank lives or dies,” Hussain said. “That’s really where I think the rubber will hit the road.”

“In terms of how far we’re away from that pillar 1 designation, I think we’re still about three years away,” he said.

The key hurdle now is ensuring that banks get the data they need from companies to enable them to assess their climate risks. And that’s where even regulators are sounding the alarm.

“The issue which concerns me most right now is whether the non-financial sector is capable of delivering the information to the financial sector which the financial sector demands and which it will have to have given the whole disclosure and taxonomy apparatus which is being implemented,” Jesper Berg, the director general of the Danish Financial Supervisory Authority, said in an interview.

As the top financial supervisor in a country that is ranked the world’s greenest, Berg notes that even in Denmark corporations are facing a huge task. He also says requirements for corporations to provide data have lagged behind disclosure demands being made on banks.

“As a public authority, we need to flag this issue and the risks so that companies know that they need to do something, possibly at an earlier stage than they expected to do it,” Berg said. “This is not a small challenge for the private, non-financial sector.”

Meanwhile, European banks are being warned by their watchdogs to stop resisting new rules or risk weakening the financial system, as the Basel III framework is finalised.

Dow says regulators and politicians have so far only indirectly addressed the issue of whether banks should have buffers to absorb potential losses from climate catastrophes.

“If we think of classifications and even stress testing for climate change, none of the regulators have said that the output is going to be directly helping inform capital requirements,” she said. Still, “we think that increasingly regulators are looking at capital requirements on this, taking this holistic approach.”