As U.S. lawmakers are joining the call for better oversight of the booming leveraged loan industry, some experts warn they better hurry before the next downturn.

Last week a subcommittee of the U.S. House Financial Services Committee held a high-profile hearing on leveraged loans to study the explosion of debt owed by weaker U.S. companies in the past decade, and to see if it could pose systemic risks.

A leveraged loan is a loan extended to companies that already have considerable amounts of debt or a poor credit history. HYG, -0.07%

Several witnesses at the hearing drew parallels between today’s leverage loan market and the proliferation of subprime mortgages in the run-up to the financial crisis, according to written testimony.

But a key take-away was that lawmakers want better oversight of leveraged loans before there is trouble.

“For me, a core message from the hearing was that regulators really need to have their finger on the pulse of what’s going on,” said Erik Gerding, a professor of law at the University of Colorado specialized in financial regulation, who testified at the hearing.

“Market discipline is deteriorating and oversight is deteriorating,” Gerding told MaketWatch. ““It’s sort of like turning off all of your instruments, just at the point that you are flying into the storm.”

The sheer growth in leverage loans over the past dozen years has stoked fears that any fallout from debt-laden companies in the next recession could spill into other sectors.

The size of the leveraged loan market has doubled to nearly $1.2 trillion from about $550 billion back in 2007, according to data from the Loan Syndications and Trading Association (LSTA), an industry trade group.

That still makes leveraged loans less than a 5% slice of overall U.S. fixed-income, according to LSTA data, in part because corporate-related risks have mushroomed across bonds and stocks DJIA, -0.07% since 2007. 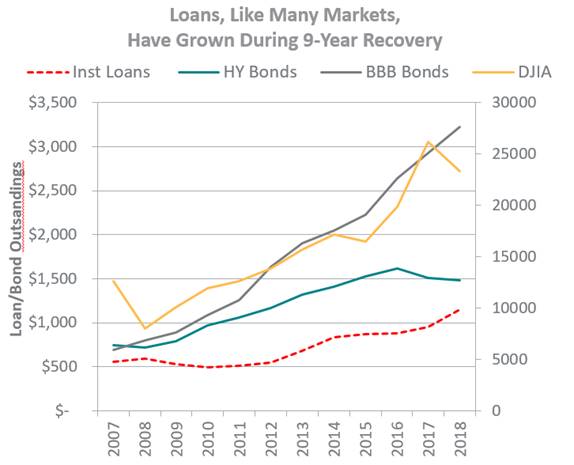 While tracking stock prices and holdings are relatively simple tasks, things get murkier when it comes to leveraged loans.

Like mortgages, the bulk of leveraged loans are bundled up and sold as classes of bonds, a process that can spread risks far and wide, but makes tracking where all those pieces sit harder.

Currently, the single-biggest buyer of leveraged loans are funds called collateralized loan obligations (CLOs) that issued bonds, with a 62% share of the market, according to Moody’s Investors Service. 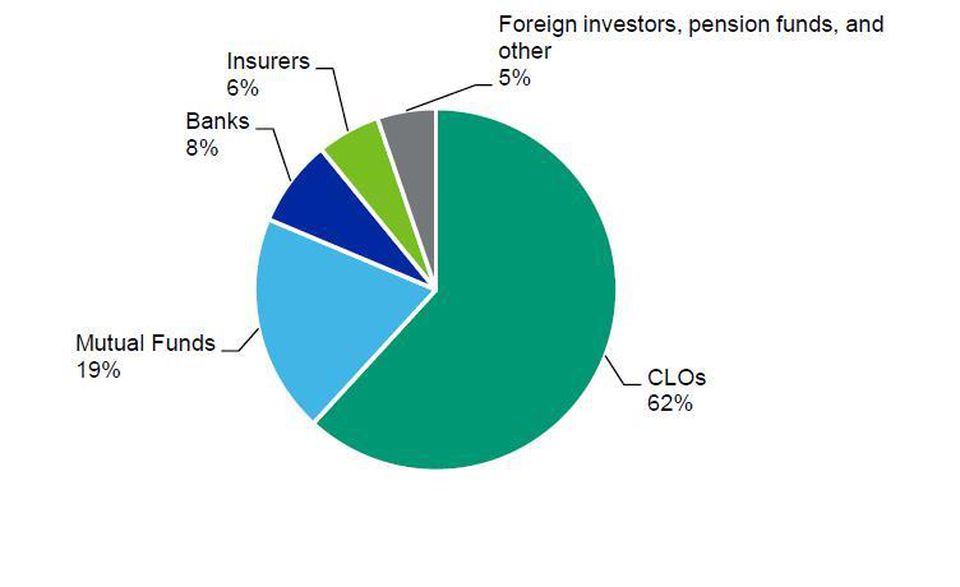 CLOs, unlike subprime mortgage CDOs, have a strong track record, even through the global financial crisis, but the loans that underpin CLOs have gotten riskier.

There are also more CLOs than ever before, including those in retirement savings accounts, mutual funds and pension plans to help boost returns.

“Do you think firefighters in California or New York have any idea their pensions are invested in CLOs?” said Mayra Rodriguez Valladares, a consultant focused on banking and capital markets regulation in New York.

Elliott Ganz, the LSTA’s general counsel, said that examination of the sector is important, but that the current data does not support fears. “We understand it’s a large market. It’s had robust growth,” he told MarketWatch. “But there is no evidence that leveraged loans are systemically risky.”

Still, Gerding said the next crisis need not be as expansive as 2008 to cause pain.

“One of the things that we have to be careful about, is not to use the 2008 financial crisis as the ultimate bellwether of what we should be worried about,” he said.

The Federal Reserve last November singled out the $2 trillion exposure of mutual funds to corporate debt in the report as a potential flashpoint.

The fear is that a sharp selloff that could spark investors to dump shares of publicly-traded funds and trigger assets sales at fire-sale prices.

Mohamed El-Erian, chief economic advisor at Allianz, warned this week about the hazards of such redemptions, as markets have grown comfortable with liquidity being pumped in from central banks.

To keep better tabs on mounting risks, lawmakers during last week’s leveraged loan hearings also circulated draft bills to give more teeth to the Office of Financial Research, which was set up in 2010 to track building financial risks, but has since seen its funding cut.

The bills aim to restore the OFR’s budget to at least its 2017 level during the Obama administration. They would also give the agency more oversight of leveraged loans and CLO risks, including by granting it power to demand documents through subpoena.

“It’s become a punching-bag for political purposes,” said Rodriguez Valladares of the OFR. “I like the bills being proposed. But I’m not optimistic things will get passed.”