Warren Buffett's Berkshire Hathaway has trimmed its huge stake in Apple and is betting on big pharma as the industry's fortunes swing on the development of a COVID-19 vaccine and therapeutics.

Berkshire disclosed new investments in Merck and Pfizer during the third quarter, while also adding bets on AbbVie and Bristol-Myers Squibb, according to a regulatory filing on Monday. Meanwhile, Buffett's conglomerate continued to cut stakes in financial companies, including Wells Fargo and JPMorgan Chase. It also sold off 36.3 million Apple shares, even though the iPhone maker remains Berkshire's biggest single investment with a holding worth nearly $US114 billion ($156 billion).

Berkshire started snapping up the health stocks just months ahead of a disclosure from Pfizer and its German research partner BioNTech that their vaccine protects most people from COVID-19, news that sent Pfizer stock soaring. Merck has also been pushing ahead with therapies for the virus. 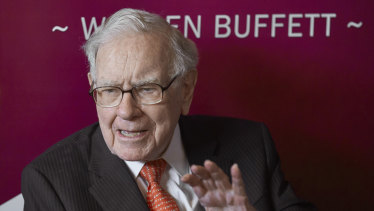 Warren Buffett’s Berkshire Hathaway is betting on big pharma in the pandemic. Credit:AP

The bets give Berkshire more exposure to pharmaceutical companies as countries around the globe prepare to ramp up efforts to distribute a COVID-19 vaccine whenever one is approved. Buffett's company had stakes valued at more than $US1.8 billion each in AbbVie, Bristol-Myers Squibb and Merck at the end of the quarter, and about $US136 million in Pfizer. Berkshire omitted some confidential information with its routine regulatory filing.

Buffett, 90, has been cautious during the pandemic, saying in May that his then-record cash pile wasn't that huge when considering the worst-case possibilities. He's since deployed cash in Japan and into natural-gas assets, and has bought back Berkshire's own stock. His friend Bill Gates, a former Berkshire board member, has been donating through his foundation to help fund vaccine efforts.

Earlier in the crisis the billionaire investor dumped airline stocks and sold financials. His company continued to pare bank holdings in the third quarter, trimming Berkshire's Wells Fargo stake and slashing its JPMorgan investment by 96 per cent.

Berkshire has been chipping away at its Wells Fargo stake in recent months after more than three decades holding onto that bet. It held about 127 million shares at the end of September, a marked shift for an investment that once ranked as Berkshire's biggest.

Berkshire also took a stake in telco company T-Mobile US during the third quarter, a holding valued at $US276 million, and detailed a new investment in Snowflake that it picked up during the cloud-based data provider's initial-public offering. Berkshire held 6.1 million shares of Snowflake at the end of the third quarter.

Berkshire officials don't typically comment on its quarterly stock filings. And the document doesn't make clear which investments Buffett himself made. Buffett handles the biggest investments in Berkshire’s portfolio, such as Coca-Cola, Apple and Bank of America. He has said that investments of less than $US1 billion are likely to be the work of Berkshire’s two other investment managers.