Challenger chief executive Richard Howes says the group is tilting its property portfolio towards defensive assets such as neighbourhood shopping centres and government buildings as the impact of COVID-19 continues to bite into company profits.

Mr Howes, who announced his resignation mid-way through a five-year tenure on Tuesday, said Challenger was in the process of selling a large Victorian office building as part of its active management of property assets. 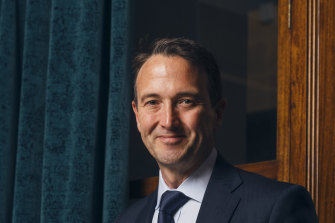 Challenger CEO Richard Howes says the time was right for him to step down. Credit:

“There’s no doubt work patterns are changing … The reality is we certainly continue to be in the pandemic,” he said. “And for our investment portfolio, that means we look at our significantly $3.5 billion property portfolio.”

Mr Howes said his surprise resignation came because the time was right to “hand over the baton” and did not say there was anything he would change about his tenure. He will leave the company more diversified, owning a small bank, Catholic Super’s banking arm, MyLife MyFinance, and the country’s third-largest fund manager through Challenger Investment Partners and Fidante Partners.

“My goal has always been to leave Challenger in a really strong position with strong foundations to support its continued growth and success,” he said. “I feel like it’s in a wonderful position and primed for its next phase of growth.”

The ASX-listed firm reported a full-year profit of $592 million for the year, a major swing from its $416 million loss reported the previous financial year. The solid results mean the company will pay shareholders a final dividend of 10.5¢ per share, taking the full-year dividend to 20¢.

Driving the company’s higher profits were record annuities sales, which were up 46 per cent over the year to $4.6 billion. Challenger is the country’s largest provider of annuities, financial products that can provide an income for life by investing in a pool of defensive assets like fixed income and property.

As part of the federal government’s superannuation reforms, it will be compulsory for all funds to develop a retirement plan for customers starting in June next year. Mr Howes said this was a significant reform that was set to benefit retirees and Challenger as it strengthens ties with the lucrative industry super sector.

“We’ve doubled the number of institutional clients that we deal with over the last five years … I’m optimistic for the prospect of a number of partnerships.”

Global investment firms Apollo and Athene bought a 15 per cent stake in Challenger last month, fuelling speculation the company was ripe for a takeover. Mr Howes said the deal was an endorsement of Challenger’s business model but would not comment on any future takeover plans. “That’s probably more a question for them, but it’s early stages, we’re looking forward to opportunities to work with them, we certainly have areas of overlapping capability.”

Morningstar analyst Shaun Ler said investors were concerned with the company’s profit guidance, adding there remained headwinds amid the low interest rate environment and lower profit margins from institutional clients, although Mr Howes said these had been factored in.