Zip Co says revenue jumped by 80 per cent in the March quarter in annual terms, amid a surge in transactions in its crucial United States business.

In a trading update, the buy now, pay later (BNPL) rival to Afterpay said its revenue was $114.4 million in the quarter, as spending on its platform jumped by 114 per cent in annual terms, despite the March quarter being a slower period for consumer than the three months to December. 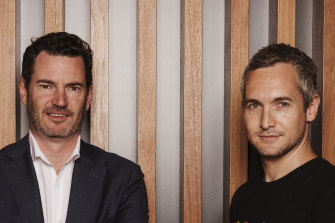 The company’s US business, Quadpay, was the star performer, with total spending on its US platform up by 234 per cent in annual terms, and US revenue rising 188 per cent to $54.4 million.

Some quarterly numbers were softer when compared with the busy December period, which included Black Friday, Cyber Monday and Christmas.

Its core Australian business posted a 10 per cent rise in revenue compared with the December quarter, but recorded an 8 per cent fall in transaction volumes over the same period. Australia is Zip’s biggest market, but on the current trajectory it is set to be overtaken by the far larger US market, and in the quarter Zip also launched in the United Kingdom.

Zip’s managing director Larry Diamond said the company expected a “very exciting future” in the UK, after several major brands joined the platform in the quarter and its app was launched to the public.

“We are extremely pleased with the strong growth and momentum in the business, delivering another exceptional set of numbers. Our US business was again a standout, confirming our position as truly one of the fastest growing global BNPL leaders,” Mr Diamond said.

In the US, Zip said its Quad business had delivered an “outstanding” result, with March quarter transactions climbing by 10 per cent compared with December, despite the quarter being a seasonally weak period.

Quadpay co-chief executive Brian Lindenberg said: “We are extremely pleased with these results which demonstrate the continued acceleration of the business and strong adoption of our product by consumers in the world’s largest eCommerce market.”

Zip is the second largest Australian player in the booming BNPL sector behind Afterpay, and like its rival it is targeting rapid growth overseas. BNPL firms allow customers to purchase goods and services upfront and repay the funds in interest-free instalments, but the product is not regulated as credit. The industry has experienced rapid growth, as younger customers increasingly opt for BNPL products instead of credit cards.

Zip said it had also conducted a soft launch into Canada during the March quarter, and it had agreed to make a strategic investment into a Philippines BNPL business called Tendopay, and to top up an investment in an Eastern European BNPL operator called Twisto.

The company’s net bad debts fell to 1.78 per cent, from 1.84 per cent a year earlier, which it said reflected its technology for making credit decisions. The proportion of accounts that were more than 60 days behind on repayments was 1.2 per cent, which was higher than the level in December, but lower than the March quarter last year.