The leading proposal to revitalize and expand the nation’s broken child care system, which would spend billions of dollars to make child care free for millions of families and cheaper for millions more, has met its moment.

It has political winds at its back amid the coronavirus pandemic, which has provided the public with a brutal reminder of the issue’s importance. It has the backing of the two leading Democrats with jurisdiction over the topic, widespread support among Senate Democrats and the approval of President Joe Biden.

But the inclusion of work requirements in the legislation ― even ones far less stringent than those typically attached to safety net programs ― has drawn the ire of progressives who fear it could deter some families from reaping the program’s benefits.

The plan from Murray and Scott, who chair the respective committees with jurisdiction over child care in the Senate and House, would build on existing state subsidies. Under their proposal, families making up to 75% of their state’s median income would receive free child care. Families with incomes ranging from 75% to 150% of the state’s median income would have their child care costs capped at 7% of their household income.

During his campaign for president, Biden cited their proposal as a model for what his administration would pursue, though it’s unlikely his administration will propose fully funding Murray and Scott’s legislation, which the Congressional Budget Office is expected to estimate at as much as $600 billion over the next decade.

The chances of the disagreement over the requirements derailing final passage are essentially nil, with other debates ― such as an argument between the White House and leading members of the House over whether a child tax credit should be made permanent ― almost certain to prove far more central.

But the squabble illustrates how, even on issues where the party broadly agrees, the path to passage for Biden’s ambitious expansion of the nation’s educational offerings and safety net could be littered with legislative disputes among Democrats, whose thin legislative majorities will need to stay united to pass the plan against Republican opposition that is nearly certain to be unified.

Progressives, who already wish Murray and Scott’s proposal were more generous, are hoping they can persuade their colleagues to remove the work requirements. 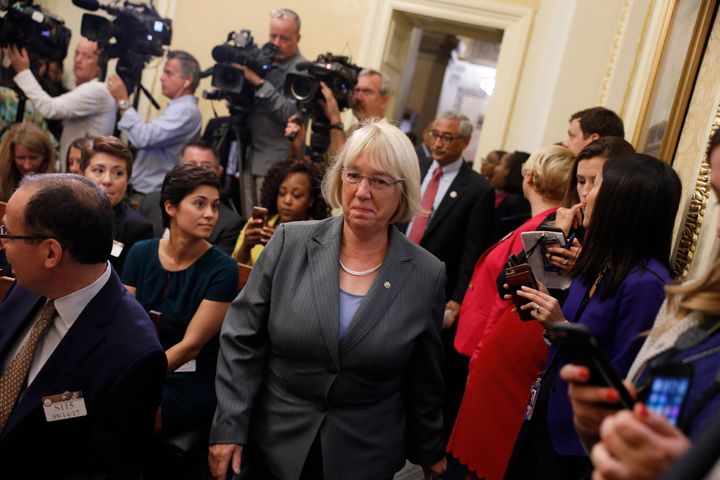 “I don’t want people not applying for child care that they would be eligible for because they fear there are some onerous requirements or that they would have to produce documentation that may not be easily available for them,” said Rep. Mondaire Jones (D-N.Y.), a freshman progressive who is the lead House sponsor of a more ambitious, and more expensive, child care proposal.

The requirements are much looser than their equivalents for food assistance programs such as SNAP or for Medicaid. Murray has gone on the record against work requirements for those programs. The Murray-Scott proposal on child care doesn’t dictate how many hours someone must work per week or require regular paperwork. It would require parents who make less than 150% of their state’s median income to confirm once a year that they are either working, looking for work, in school, on leave, disabled or older than 65. It also bars states from adding additional hurdles to qualify for child care help.

Advocates noted the requirements have become less stringent since the legislation was first introduced in 2017, with provisions added to help grandparents who are caring for grandchildren and other family arrangements. And, they say, those in need of child care are likely working or in school in the first place. The inclusion of the requirements could also help fend off Republican suggestions that the program is helping the undeserving.

“At the end of the day, what we all want is to make quality child care affordable for every family — especially families who are struggling,” Murray said in a statement. “I’m grateful to everyone who’s making sure child care is a priority and thrilled we’re finally in position to make the transformative changes we’ve needed for so long. This is going to make a huge difference for children, workers, families, and our economy.”

Meanwhile, Sen. Elizabeth Warren (D-Mass.), joined by Jones and Rep. Sara Jacobs (D-Calif.), reintroduced a competing plan Tuesday that would make a $700 billion universal child care investment, more than three times the investment that Biden is proposing. Warren’s plan would give families living on up to twice the federal poverty line free child care. No American family would pay more than 7% of their income on child care. Their plan does not have any work requirements.

Sources working on child care legislation, however, suggested it was likely the CBO would estimate the cost of Warren’s plan at much higher than $700 billion, making it far too pricey to include in Biden’s proposal.

Jacobs has signed on to Warren’s proposal and is also a co-sponsor of the Murray-Scott plan.

“For me, it’s about getting assistance out to families however we can,” she said. “I don’t believe work requirements are good policy for this, especially as we know so many different forms of work are not adequately valued and represented in our economy.”

The inclusion of work requirements keeps the Murray-Scott plan’s costs down, Jones said, which suggests it would deter enrollment.

“When you eliminate the work requirements, the price tag goes up, and I’m not as concerned with the price tag as certain other people,” Jones said. “I think we have the money to pay for it. In fact, I know we do. It’s just a question of whether we have the political will to raise the revenue that we need.”

Child care advocates, many of whom would only speak anonymously to avoid antagonizing lawmakers, said they expected Democrats to reach an agreement to resolve the dispute ― or for the legislation to simply move forward.

“It’s great to have a lot of perspectives and a lot of voices coming to the table to make legislation better,” said Julie Kashen, the director of women’s economic justice at The Century Foundation, a progressive, nonpartisan think tank. “But this is the vehicle that’s going to have the energy to move forward.”

The inevitable nature of the plan is part of the reason dozens of progressive members, including Oregon Sen. Jeff Merkley, Massachusetts Sen. Ed Markey and Michigan Rep. Rashida Tlaib, have signed on as co-sponsors of the legislation even with their ideological compatriots’ misgivings.

Democrats are aware neither Murray’s nor Warren’s proposal will have the backing of Republicans. To pass them, they will likely have to push the policy through the budget reconciliation process, a legislative maneuver that allows bills to pass the Senate with only 51 votes. But reconciliation bills cannot increase the deficit outside a set window, meaning Democrats would have to find the revenue to offset the costs of these programs.

The Biden administration has proposed hiking the capital gains tax and the top income tax rate, along with other tweaks, to pay for the overall $1.8 trillion cost of the American Families Plan.