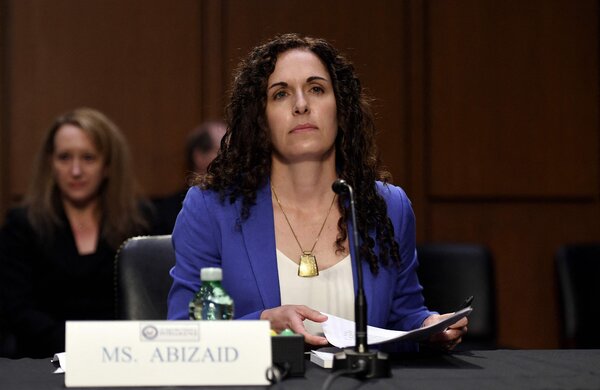 Lawmakers quizzed the Biden administration’s nominee to lead the National Counterterrorism Center on Wednesday about the role of intelligence agencies in investigating domestic terrorism.

Christine S. Abizaid, the nominee to lead the center, said that the kind of terrorist groups that the United States faced was changing. Though she repeatedly emphasized that the F.B.I. would continue to take the lead in domestic terrorism investigations, she also said there was a role for the broader intelligence community to look for connections between domestic extremists and foreign groups.

The counterterrorism center, she said, “was established to connect the dots, integrating intelligence from across an array of sources, whether they’re foreign or domestic.”

“Any use of intelligence authorities needs to be consistent with the Constitution, and follow the laws of land; that is a very bright line,” Ms. Abizaid said. “And it’s one that has to govern all of our activities across the intelligence community.”

As the hearing ended, Senator Angus King, the Maine independent who votes with the Democrats, said the question of investigating domestic violent extremism was being made “more complicated than it needs to be.”

“The keyword is violent,” Mr. King said. “We don’t want to be in the business of spying on Americans but we also have to protect ourselves.”

If approved by lawmakers, Ms. Abizaid, who was accompanied by her wife, would be the first woman and first openly gay person to serve as the Senate-confirmed leader of the center. At the hearing Wednesday, Ms. Abizaid talked about her wife and other family members as a key part of her motivation and inspiration.

Ms. Abizaid is the daughter of a former top military commander in the Middle East, retired Gen. John P. Abizaid, and her brother and brother-in-law served in the military.

Ms. Abizaid said her career, like those of her family members, was “rooted in the attacks on 9/11.” She worked in the Defense Intelligence Agency before serving on the National Security Council staff and as a senior Pentagon official during the Obama administration.

Ms. Abizaid said the threat from Al Qaeda and the Islamic State was now diminished. Those groups today are less able to attack the United States, she said, but have become active across a larger geographic area.

Ms. Abizaid said it was important to maintain the hard-won gains against terrorism, even while adapting to its shifting threats.

Ms. Ashton said she would ensure the C.I.A. maintained an “effective whistle-blower program.”

“Those who demonstrate the personal ethics, and moral courage to bring concerns forward, must not fear or suffer from reprisal for speaking up,” Ms. Ashton said.