More than 100 million Americans had cast their ballots even before the polls opened on Election Day, a record early vote that showed that many people had taken advantage of the changes many states made to voting safer during the pandemic and suggested that the nation was on pace to set a record for turnout.

As the polls prepared to open on Tuesday, a staggering 100.3 million ballots had already been cast, according to the U.S. Elections Project, a nonpartisan website run by Michael P. McDonald, a University of Florida professor who compiles data from across the nation. That number is nearly three-quarters of the total of over 138 million votes cast in the 2016 election.

Several states have already recorded more votes than they did during the whole 2016 election, including Texas, Washington, Montana and Hawaii, and several battleground states, including Florida, Georgia and North Carolina, were nearing their 2016 totals.

The Trump and Biden campaigns were sifting through early vote data to try to figure out which potential supporters had yet to cast ballots, so they could target them during last-minute get-out-the-vote efforts.

Political analysts and opinion polls have suggested that Republican voters are more likely to vote on the day of the election, while Democrats are more likely to vote early, especially by mail. So some analysts were looking at the early data to try to divine whether Democrats had built up enough of an early vote lead in key states to withstand a big Republican turnout on Election Day. Of course, no one will know until the election is over and all the votes are in.

Here is a look at where things stand in several key states, according to data compiled by the elections project.

In Florida, a perennially close state, Democrats built up a huge lead with mailed-in votes only to see Republicans eat into it by casting more early in-person votes. As Election Day dawned, registered Democrats had cast 39.1 percent of the early vote, registered Republicans 37.9 percent, and the rest were cast by voters with no party affiliation or who belonged to minor parties.

In North Carolina, Democrats have cast 37.4 percent of the early vote, Republicans 31.7 percent, and the rest were cast by voters with no party affiliation or who belonged to minor parties.

And in Nevada, Democrats have cast 39.5 percent of the early vote, Republicans 36.1 percent, and the rest were cast by voters with no party affiliation or who belonged to minor parties. 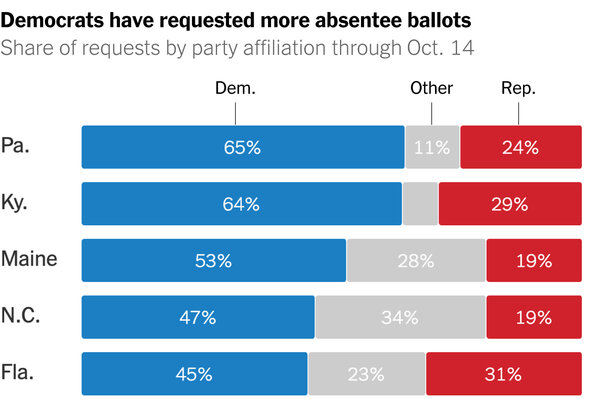 More than 100 million ballots have already been cast in the general election. More Democrats are voting early by mail than Republicans.