Afghanistan: UK in race against time to fly 2,000 out of Kabul 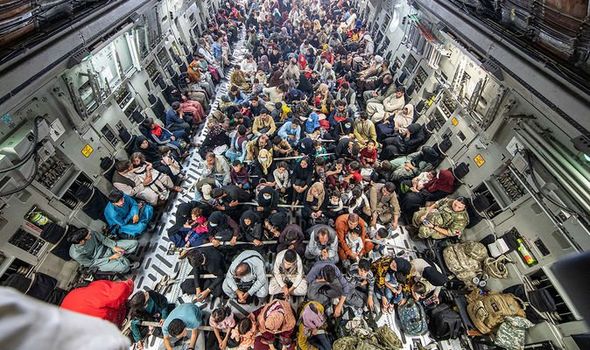 The death toll in Kabul from the scramble to escape the Taliban reached 20 yesterday, and a senior diplomat said the effort to evacuate UK nationals was “gathering pace”. But he warned: “There is still a huge amount of work to do.”

Last night the pressure appeared to be working when President Biden opened up the possibility of a deadline delay.

He said: “There are discussions going on among us and the military about extending ‑ our hope is we will not have to extend.

“But there are going to be discussion I expect about how far along in the process we are.

“We are working closely with the G7. I am doing a conference with them on Tuesday.”

More than 5,000 UK nationals and Afghans have been evacuated but unofficial estimates suggest up to 2,000 are awaiting flights out.

Meanwhile, Boris Johnson’s push to head a world response to the Taliban takeover continues when he chairs those “urgent” talks with G7 leaders tomorrow.

Mr Johnson said: “It is vital that the international community works together to ensure safe evacuations, prevent a humanitarian crisis and support the Afghan people to secure the gains of the last 20 years.”

However, he warned even if successful they could not guarantee they “will be able to get everybody out”.

He added: “The hard reality of complex, chaotic, dangerous situations like this is that simply may not be the case.”

Officials fear the timing of the final US troops pulling out from Kabul airport remains in doubt. A Downing Street source said: “There is no fixed end date.Things are in flux.”

UK ambassador to Afghanistan Sir Laurie Bristow, who is leading efforts at the airport to process passengers, said the evacuation was “gathering pace” as officials worked around the clock.

He said yesterday: “It’s a huge effort. In the last 14 hours alone we’ve managed to get 1,000 people on their way. But there is still a huge amount of work to do.”

On the ground, Lt Col Justin Baker of 16 Air Assault Brigade said his troops were “facing challenges that nobody has experiences for”.

And Mr Heappey reported: “In the last 24-hour period 1,721 have been airlifted from Kabul by the Royal Air Force.

“The Taliban have pushed their outer cordon away from the Baron Hotel and they appear to now be marshalling people into separate queues for the US evacuation and the UK evacuation.

“That is making a big difference to the size of crowds outside the UK gate and allowing us to process people much more quickly.”

Asked about hopes the US will extend the final troop withdrawal deadline, Mr Heappey said: “We are assuming nothing.

“The Foreign Secretary has made representations to his opposite number and to the Secretary of Defence and likewise.

“If the programme is extended, then there is the opportunity to continue with flights. But the Taliban get a vote in that too. It’s not just a decision made in Washington.

“It’s important people shouldn’t despair that whenever the military airbridge ends, that is the end of their chances of leaving Afghanistan.”

Operation Pitting, the military evacuation of British nationals and eligible Afghans, has so far flown 5,725 people out of Kabul, plus more than 3,100 Afghan individuals and families.

Joint forces operations commander Brigadier Dan Blanchford said: “The horrific difficulties which families and individuals have in getting to the airport are clear and my men and women have witnessed some harrowing scenes.

“We are redoubling our efforts to speed up the processes and support the most vulnerable. We have flown forward 30,000 litres of water a day, food for 5,000 people and have purchased and are distributing 2,700 nappies, 3,600 bottles of baby milk and 2,025 sanitary packs.”

The MoD said the evacuation process would run as long as the security situation allowed, in coordination with the US.

More aircraft, including some from the Royal Australian Air Force, have been flying people from Kabul to Dubai.

Former Labour PM Tony Blair, who sent UK troops to Afghanistan in 2001, claimed yesterday the Taliban takeover would allow Al-Qaeda to return to the country.

He said: “It’s not just about the Afghan people and our obligation to them. It’s about us and our security. Because you’ve now got this group back in charge of Afghanistan.

“They will give protection and succour to Al-Qaeda, you’ve got ISIS already in the country trying to operate at the same time.

“You look round the world and the only people really cheering this decision are the people hostile toWestern interests.”

In an article on Saturday, Mr Blair described America’s decision to withdraw troops from Afghanistan as “imbecilic”.