After Capitol Riot, Pentagon Announces New Efforts to Weed Out Extremism Among Troops

WASHINGTON — One young soldier said that for the first four months after he joined his Army unit, a flag representing the right-wing militia the Three Percenters hung in the entry hall of his barracks.

A Black Marine described feeling sick when he saw the iconic red-and-gold flag of his military service being waved by rioters during the Jan. 6 Capitol attack.

A white brigadier general fretted privately about whether service members could get in trouble for supporting former President Donald J. Trump. A Black Army sergeant described having no one to talk to in his office after the death of George Floyd in police custody.

The Pentagon last week concluded its 60-day “stand down” to address extremism in the military. With a handful of exceptions, every unit in the armed forces has now had some sort of discussion about why white supremacy and extremism — laid bare by the number of veterans who took part in the Jan. 6 Capitol riot — have no place in the American military.

But as the Pentagon on Friday presented its path forward — a working group will be set up to examine how to better vet recruits and how to better educate service members who may be targeted by extremist organizations — senior Defense Department officials acknowledged that one thing is clear: Rooting out extremist views from a military of 1.3 million active-duty troops drawn from Alaska to Florida will be an uphill slog.

“The vast majority of those who serve in uniform and their civilian colleagues do so with great honor and integrity, but any extremist behavior in the force can have an outsized impact,” Defense Secretary Lloyd J. Austin III said in a memo on Friday.

The Pentagon is directing all of the military services to ask recruits a standardized set of questions about extremism in its screening questionnaires to help weed out those who might take part in extremist organizations. But that, by itself, will be difficult to enforce — because the Pentagon does not specifically ban membership in many of those groups.

Mr. Austin’s memo says that the updated screening questionnaires will nonetheless better enable officials to “clarify that any demonstrably false answers provided in response could form the basis for punitive action for fraudulent enlistment.” A Defense Department official said the Pentagon was still trying to figure out how to avoid running afoul of the First Amendment protections of freedom of speech and freedom of assembly.

The phrase “stand down” is used in the military to refer to any issue that the defense secretary decides is important enough that it needs to be addressed through discussions across the force. In the past, “stand downs” have been employed to address topics as varied as safety concerns, sexual assault and suicide.

The latest “stand down” was ordered up by the first Black defense secretary, to remind the country’s military personnel that the oath they took to support and defend the Constitution means that they cannot storm the Capitol to stop lawmakers from certifying election results they do not like.

The “stand down” sessions, said John F. Kirby, the Pentagon press secretary, demonstrated that “the force wants better guidance about what extremist activity really is,” calling it “a hunger for more information and context.”

Mr. Kirby said the department would also work on how to better prepare service members leaving the military to re-enter civilian life.

“In some cases, when you retire, they tell you how to pick out a suit and a tie,” he said during a news conference. “But there’s nothing in there, not consistently anyway, about this particular problem.” He said that extremist groups were “seeking the kinds of skills, the kinds of leadership that our men and women exude.”

Defense Department officials and enlisted service members interviewed for this article said that the sessions led to some painful conversations. But the process was sometimes characterized by a scripted, forced delivery from some commanders and senior leaders who seemed uncomfortable with their task. 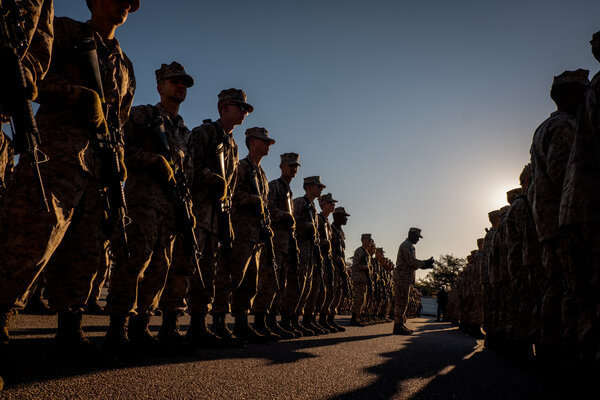 The Marine Corps released a video last month featuring top leaders that some Black Marines, in private chats, characterized as seeming forced. In the video, Gen. David H. Berger, the Marine commandant, and Sgt. Maj. Troy E. Black, the senior enlisted leader, both white men, urged Marines to pay attention to the “stand down.” Their awkward presentation prompted Task and Purpose, an online news site focused on the military and veterans, to publish an article with the headline, “Top Marine Leaders Look Like They’ve Been Taken Hostage in This New Video.”

In other messages to the force, some senior leaders struggled to balance standard rally-the-troops talk with the realities laid bare by the Capitol riots’ exposure of extremism in the military.

Gen. James C. McConville, the Army chief of staff, sought to bridge that divide. “Well, the message from the senior leaders is we have the world’s greatest Army,” he said during the service’s “stand down” session with senior leaders. “The way we maintain that is preventing behaviors that hurt our soldiers and break trust with the American people. Behaviors like extremism, racism, sexual harassment and sexual assault — they hurt our soldiers and they break trust with the American people so we cannot have them in our Army.”

In fact, as Pentagon leaders are quick to say, the military cannot be a reflection of the United States without hosting the same kinds of people and allegiances that are embedded in the population as a whole. But while the military is one of the country’s most diverse institutions — some 43 percent of those on active duty are people of color — Defense Department officials acknowledge that the views of its white service members skew conservative.

On American bases around the world, televisions are often tuned to Fox News. This was particularly so during the Trump administration; since President Biden was inaugurated, CNN and MSNBC have started showing up more.

Officials with the Biden administration have expressed concerns about certain broadcasts targeting troops. On March 2, Mr. Kirby ordered a review of programming on the American Forces Network, which caters to service members and families abroad.

While the military can limit what kinds of programs are broadcast in public areas on bases, the Pentagon could run into First Amendment issues as it tries to vet recruits and even active-duty troops.

On Jan. 29, Representative Jackie Speier, Democrat of California, sent a letter to Mr. Biden, Mr. Austin and Avril D. Haines, the director of national intelligence, asking them to update the military’s background investigation process. She said that it should incorporate a review of service member’s social media profiles to identify ties to white supremacists or violent extremists, as well as establish procedures to review the social media activity of recruits before they join the armed forces.

Experts note that asking someone if they are an extremist is hardly the solution. Deborah Carrington, a former federal investigator with the Defense Security Service and the Office of Personnel Management, said asking people “questions about being part of a terrorist organization or being involved in terrorist activities,” was rarely productive.

“They won’t admit to it,” she said. “The only way to find out is to interview someone who was involved in those activities with him.”