Former Sen. Al Franken, D-Minn., left the door open to running for public office again despite being ousted from the Senate by his own party amid sexual misconduct allegations in 2018.

Speaking to Massachusetts-based newspaper The Republican, the 70-year-old Franken talked about his new standup tour titled “The Only Former U.S. Senator Currently on Tour,” but also mentioned his political action committee and his potential political future.

“I’m keeping my options open,” Franken said. “Right now my focus is on doing this (tour) and doing other stuff that is more politically blatant.”

Remembering when he resigned the Senate seat to which he was twice elected in Minnesota, Franken said, “Well, I wanted due process, but I had 36 colleagues and a majority leader who wouldn’t give it to me, so it was impossible. But you do have some regrets. It was a very weird, tough situation at that moment,” Franken said. “I love the Senate. I love the work that I did.”

Calls for Franken’s resignation mounted when several women accused him of sexual misconduct and a photo surfaced of him appearing to pretend to touch radio host Leeann Tweeden’s breasts. 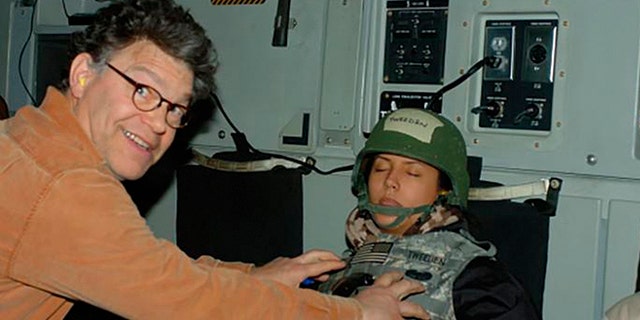 Al Franken is seen in a controversial photo that led to his resignation from the U.S. Senate in 2018.

Franken has since expressed regret for having resigned and nine of his former colleagues have issued public apologies for not supporting him.

Franked said he is focused for now on his comedy tour and the political power of satire. “The reason I’m doing it is because with my history at ‘SNL’ and my books,” he said. “I’ve always tried to make a difference satirically. Because I believe comedy and satire is a very valid way — and sometimes almost a more productive way — of affecting public opinion.”

Before he entered politics, Franken was a performer on “Saturday Night Live” for a decade. He later became a political author and radio host on Air America Radio.