Representative Alcee Hastings, a former federal judge who, despite being impeached and removed from the bench, was elected to Congress, where he championed civil rights and rose to become dean of the Florida delegation, died on Tuesday. He was 84.

Lale Morrison, his chief of staff, confirmed the death. He provided no other details.

Mr. Hastings, a Democrat, had announced in early 2019 that he had pancreatic cancer. He continued to make public appearances for a time but was unable to travel to Washington in January to take the oath of office.

His death reduces his party’s already slim majority in the House of Representatives, which is now 218 to 211, until a special election can be held to fill his seat. His district, which includes Black communities around Fort Lauderdale and West Palm Beach as well as a huge, less populated area around Lake Okeechobee, is reliably Democratic.

A strong liberal voice, Mr. Hastings was a pioneering civil rights lawyer in the 1960s and ’70s in Fort Lauderdale, which at the time was deeply inhospitable to Black people. Throughout his career he crusaded against racial injustice and spoke up for gay people, immigrants, women and the elderly, as well as advocating for better access to health care and higher wages. He was also a champion of Israel.

He achieved many firsts. He was Florida’s first Black federal judge and one of three Black Floridians who went to Congress in 1992, the first time Florida had elected African-American candidates to that body since Reconstruction. He served 15 terms in the House, longer than any other current member, making him dean of the delegation.

He had earlier in his career been the first Black candidate to run for the Senate from Florida.

In 1979, he was appointed by President Jimmy Carter to the U.S. District Court for the Southern District of Florida. In 1981, he became the first sitting federal judge to be tried on criminal charges, stemming from the alleged solicitation of a bribe. The case ended up before the House, which impeached him in 1988. The Senate convicted him in 1989 and removed him from the bench.

But it did not bar him from seeking public office again, and he went on to win his seat in Congress three years later. He took the oath of office before the same body that had impeached him.

If his wings were clipped in Washington, Mr. Hastings was adored at home, where his early fights for civil rights and his outspokenness helped him easily win re-election for nearly three decades.

In a 2019 review of his career, The Palm Beach Post described him as “a man with immense gifts — boldness, intellect, wit — who repeatedly and brazenly strides close to the cliff’s edge of ethics, unconcerned that scandal could shake his hold on a congressional district tailor-made for him.” 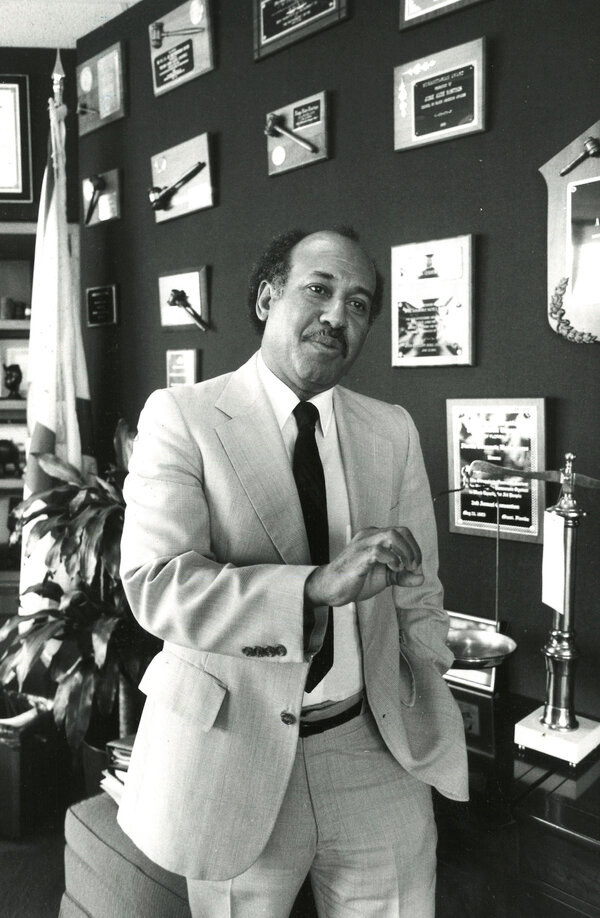 Alcee Lamar Hastings was born on Sept. 5, 1936, in Altamonte Springs, a largely Black suburb of Orlando. His father, Julius Hastings, was a butler, and his mother, Mildred (Merritt) Hastings, was a maid.

His parents eventually left Florida to take jobs to earn money for his education. Alcee stayed with his maternal grandmother while he attended Crooms Academy in Sanford, Fla., which was founded for African-American students and is now known as Crooms Academy of Information Technology. He graduated in 1953.

He attended Fisk University in Nashville, graduating in 1958 with majors in zoology and botany, and started law school at Howard University before transferring to Florida Agricultural and Mechanical University in Tallahassee. He received his law degree there in 1963.

As a student, he was involved in early civil rights struggles. Recalling a drugstore sit-in in North Carolina in 1959, he later said: “Those were the early days of the civil rights movement, and the people in Walgreens were breaking eggs on our heads and throwing mustard and ketchup and salt at us. We sat there taking all of that.”

He went into private practice as a civil rights lawyer in Fort Lauderdale. When he arrived, according to The South Florida Sun-Sentinel, a motel wouldn’t rent him a room; throughout much of the 1960s and ’70s, parts of the county were dangerous for Black people.

At a luncheon honoring Mr. Hastings in 2019, the newspaper said, Howard Finkelstein, a former Broward County public defender, called him a “howling voice” trying to change Broward from a “little cracker town that was racist and mean and vicious.”

Mr. Hastings filed lawsuits to desegregate Broward County schools. He also sued the Cat’s Meow, a restaurant that was popular with white lawyers and judges but would not serve Black people. The owner soon settled the lawsuit and opened the restaurant’s doors to all.

Mr. Hastings ran unsuccessfully for public office several times, including for the 1970 Democratic nomination for the U.S. Senate. He wanted to show that a Black man could run, but he received death threats in the process.

Representative Charlie Crist, who was a Republican when he was governor of Florida but who later became a Democrat, said in a statement on Tuesday that he had “long admired Congressman Hastings’s advocacy for Florida’s Black communities during a time when such advocacy was ignored at best and actively suppressed or punished at worst.”

Gov. Reuben Askew appointed Mr. Hastings to the circuit court of Broward County in 1977; the swearing-in ceremony was held at a high school he had helped desegregate. Two years later, President Carter named him to the federal bench.

But in 1981, Mr. Hastings was indicted on charges of soliciting a $150,000 bribe in return for reducing the sentences of two mob-connected felons convicted in his court.

A jury acquitted him in a criminal trial in 1983 after his alleged co-conspirator refused to testify, and Mr. Hastings returned to the bench.

Later, suspicions arose that he had lied and falsified evidence during the trial to obtain an acquittal. A three-year investigation by a judicial panel concluded that Mr. Hastings did in fact commit perjury, tamper with evidence and conspire to gain financially by accepting bribes.

As a result, Congress took up the case in 1988. The House impeached him by a vote of 413 to 3. The next year, the Senate convicted him on eight of 11 articles and removed him from the bench.

His impeachment was never far from the surface in the House. This was evident after the Democrats took back control in 2006. Mr. Hastings was in line to become chairman of the Intelligence Committee. Republicans started using his history against the Democrats, prompting Nancy Pelosi, the speaker of the House, to give the chairmanship to someone else.

Mr. Hastings never sponsored major legislation, but he could be counted on to express himself freely. He had a particular loathing for President Donald J. Trump, whom he once called a “sentient pile of excrement.”

Saying what was on his mind was long a habit of his. It started getting him in trouble as soon as he was appointed to the bench, when he veered from judicial norms, criticizing President Ronald Reagan and appearing at a rally in 1984 for the Rev. Jesse Jackson, who was running for the Democratic presidential nomination.

But Mr. Hastings saw nothing wrong with giving his views; just because he was a judge, he said, that did not mean he was “neutered.” As Mr. Crist said, Mr. Hastings “was never afraid to give voice to the voiceless and speak truth to power.”

Nor was his self-confidence ever checked.

“I’ve enjoyed some of the fights, and even the process of being indicted and removed from the bench,” he told The Associated Press in 2013. “All of those are extraordinary types of circumstances that would cause lesser people to buckle. I did not and I have not.”