Time is precious, U.S. Rep. Alexandria Ocasio-Cortez warned Wednesday, reminding fellow Democrats that the majorities they enjoy in the House and Senate might not last.

In a series of Twitter messages, the lawmaker from New York suggested that an untimely death among Democrats could cost the party its slim Senate advantage even sooner than the 2022 midterm elections.

“During the Obama admin,” she wrote, “folks thought we’d have a 60 Dem majority for a while. It lasted 4 months.”

The reference was to the death of U.S. Sen. Ted Kennedy, D-Mass., in August 2009, the Washington Examiner noted. The stalwart Democrat’s Senate seat was filled by another Democrat temporarily – but then Republican Scott Brown won a special election to complete Kennedy’s term.

Kennedy’s death and Brown’s win prematurely ended a filibuster-proof super-majority that Democrats had at the time because it dropped them to 59 seats instead of the needed 60, the Examiner noted.

The newspaper also noted that the Senate started 2021 with the oldest average age in its history, at 64.3 years. It noted the advancing age of three Democrats: Sen. Dianne Feinstein, D-Calif., will turn 88 on June 22; Sen. Patrick Leahy, D-Vt., is 81; and Sen. Bernie Sanders will turn 80 later this year. 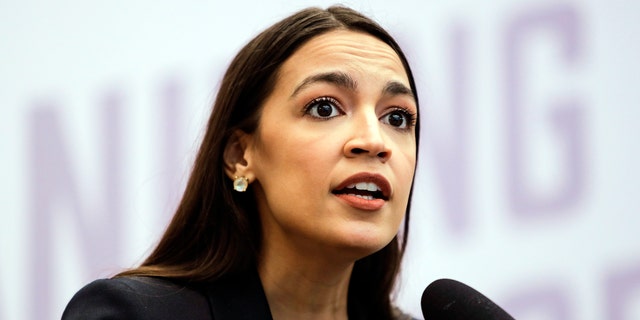 Ocasio-Cortez also urged her fellow Democrats against trying to negotiate deals with Republicans, claiming the GOP probably isn’t going to agree to much anyway.

“Dems are burning precious time & impact negotiating w/GOP who won’t even vote for a Jan. 6 commission,” she continued. “McConnell’s plan is to run out the clock.

In another message, Ocasio-Cortez referred to Biden’s talks with Senate Republicans as “playing patty-cake.”

“Pres. Biden & Senate Dems should take a step back and ask themselves if playing patty-cake w GOP Senators is really worth the dismantling of people’s voting rights, setting the planet on fire, allowing massive corporations and the wealthy to not pay their fair share of taxes, etc.” she wrote.

She also warned Senate Democrats against supporting an infrastructure bill that fails to include climate and clean energy provisions.

“Mitch McConnell and the Koch brothers are not worth setting the planet on fire for,” she wrote. “I know some Dems may disagree with me, but that’s my unpopular opinion of the day.”

Earlier in the week, Ocasio-Cortez expressed frustration after Vice President Kamala Harris told would-be immigrants from Central America, “Do not come” to the United States.

“This is disappointing to see,” Ocasio-Cortez wrote, retweeting a video of Harris’ speech in Guatemala.