Rati Gupta, an actor and writer who lives in Los Angeles, wasn’t expecting to be so emotional about Kamala Harris.

But on Tuesday, when presumptive Democratic presidential nominee Joe Biden named Harris, the daughter of an Indian mother and Jamaican father, as his running mate, Gupta said he was brought to “legit tears.”

The selection of the California senator “wasn’t a surprise to me at all ― she’d been rumored to be a top contender ― but hearing the words ‘first Indian American woman’ or ‘first South Asian woman’ on repeat really got to me,” Gupta told HuffPost.

Sometimes, she said, “you don’t know how much you need something until you get it, and this made me realize how much I’ve needed not just more women, but more women who look like me, in power in this country.”

Her excitement had nothing on her mother and aunt’s reaction. The family group chat went wild over the news.

“My mom and aunt started looking up articles about her family and found photos of her in a sari,” she said. “There were a lot of heart emojis, and a debate over what good familial title to use for her since we’d heard Kamala herself doesn’t like being called ‘auntie.’”

Harris isn’t just the first Black woman on a major party ticket. She’s also the first Indian American. And her selection comes at a time when both political parties are itching to make inroads with the nearly 2 million eligible Indian American voters.

The Biden-Harris ticket starts out with an advantage; according to the Pew Research Center, Indian Americans are the most likely to be Democrats of any Asian origin group, with 50% identifying as Democrats and just 18% as Republican.

Thomas Perez, chair of the Democratic National Committee, has said that the Indian-American vote ― and the Asian American Pacific Islander (AAPI) electorate more broadly ― could be an “absolute decision-maker” in this coming election, especially in key swing states such as Michigan, Wisconsin and Pennsylvania. Donald Trump’s narrow victories in those three states won him the White House in 2016.

With Harris on the ticket, it puts more “wind behind the AAPI sail,” he said.

Still, as she has risen in politics, Harris’ South Asian background has been often overshadowed by her Jamaican roots.

“If Kamala Harris is also of Asian descent, why does the press only label her ’Black?” a recent Poynter story asked.

At least part of the answer may lie in the words of Harris’ late mother, Shyamala Gopalan, a cancer researcher and civil rights advocate who, at 19, made the bold move to immigrate to the U.S. alone and pursue her doctorate degree at the University of California, Berkeley.

In a June interview on The Los Angeles Times podcast, “Asian Enough,” Harris said her mother was “conscious of race” when raising her and her sister, Maya, in Berkeley. That community, despite its liberal, hippie reputation, was still deeply segregated during the girls’ childhoods.

“She knew that in America, her daughters would be treated, for better or worse, as Black women and Black children, and she raised us with a sense of pride about who we were,” Harris said. But it was “never to the exclusion of always being very proud and very active in terms of our Indian culture as well.”

Now that Harris will be the Democratic nominee for vice president, many South Asian American voters said they hoped her Indian background would get equal time.

“She is beloved in our community and I’ve seen it,” said Neil Makhija, executive director of IMPACT, a Philadelphia-based civic organization that helps recruit, train, and elect Indian Americans at all levels of government.

“She has been the keynote speaker at our summits and gets totally swarmed,” he said. “I think it’s encouraging to see her South Asian background finally getting attention in the media.”

The attention it keeps getting will depend in part on Harris’ willingness to use her personal biography as a political tool. As reporter Jamilah King noted in a Mother Jones story last year as Harris was gearing up her unsuccessful presidential bid, the senator had “a reserved quality” when discussing her personal life and experiences with race on the campaign trail.

Her viral moment in the Democratic primary’s first debate ― when she shared a personal anecdote about being a member of the second class to desegregate Berkeley’s public schools through a bussing program (something that Biden, then a senator from Delaware, opposed) ― was the high point of her presidential campaign.

Harris has on occasion provided other glimpses of her personal story. A video posted to Twitter earlier this week by Harris’ sister, Maya, shows her reflecting on the experiences of her single mother.

“My mother was a proud woman. She was a brown woman. She was a woman with a heavy accent,” Harris says in the clip. “She was a woman, who many times people would overlook her or not take her seriously or because of her accent, they’d assume things about her intelligence. Every time, she proved them wrong.”

Harris has frequently said her mother is her role model. In her 2019 autobiography “The Truths We Hold,” she said she’s equally inspired by her Indian grandparents: her grandmother was a community organizer in India and her grandfather, a diplomat, worked to help resettle refugees during the that nation’s India’s post-independence partition period.

Years later, Harris would take summer trips to stay with her grandparents in the southern Indian city of Chennai. Harris speaks a smattering of Tamil,  a dialect of the region. (On the Asian Enough podcast, Harris joked that she, like many children of immigrants, ”learned words of affection and words of frustration” with “with great acuity,” thanks to her elders.)

Harris clearly embraces her biraciality and doesn’t like to choose sides. In the Asian Enough interview, she told the hosts “I was raised with a deep sense of pride in my cultural background. Just speaking about myself, as much as I don’t like to do, I’ve never had an identity crisis. I’m really comfortable in who I am.”

That said, as the hosts noted, Harris has said she prefers to simply be called “an American” ― a remark which vaguely calls to mind the comment by former Republican presidential candidate Bobby Jindal, who is of Indian heritage, about not wanting to be a “hyphenated American.”

Seattle-based policy analyst Sonyah Terrason said she doesn’t see an issue in that personal preference. Terrason herself is half Pakistani and half Mexican.

“She is American. That is her nationality,” Terrason said. “People can definitely see that she is a woman of color, though I was a little surprised to find out that she is a child of a South Asian immigrant. I had a feeling that she had some South Asian in her because of her features.”

“We need to understand that nationality does not mean erasing our ethnicity or heritage,” Terrason added.

Harris may have been slower to speak about her South Asian heritage than she would otherwise after seeing the “harsh treatment that Barack Obama had gotten about his father’s immigrant roots” with the birther movement, Karthick Ramakrishnan, a public policy and political science professor at the University of California, Riverside, said in a recent interview with NBC News.

Indeed, just days after her selection, Harris is already being targeted by birthers.

But overall, given America’s changing racial demographics, it could be useful for the Biden-Harris campaign to harness Harris’ duel racial identity and her parents’ immigrant stories, said Sumit Ganguly, a political science professor at Indiana University.

Those personal stories are even more compelling when juxtaposed with the Trump administration’s anti-immigrant policies, Ganguly told HuffPost.

“Her ascent exemplifies how the country is changing and becoming genuinely representative,” he said. “It also explains why Trump is playing fast and loose with xenophobia, appealing to that dwindling section of the country’s population that is clinging on to benighted notions of racial privilege.”

Regardless of how much Harris talks about her Indian heritage, some South Asian Americans ― younger ones especially ― have raised questions about her political record.

Before winning her Senate seat in 2016, Harris served as San Francisco’s district attorney and then as California’s attorney general. Like many Black voters, some South Asians say they are wary of the years she spent enforcing laws that disproportionately sent people of color to jail. During her campaign for president, Harris was criticized for the marijuana convictions she pursued and for arresting the parents of truant students, who were mostly Black, among other issues.

“Harris has a problematic past,” said Isha Kaur, a digital marketing manager who’s a Sikh American. “If progressives have learned anything from the Obama administration, it’s that having representation in the White House is not enough and we must continue to challenge our elected leaders.”

“I hope she adapts to learn from the urgent needs for minority communities today and that people see this beyond symbolic representation,” Kaur said.

Other voters of South Asian descent say they’ll be keeping a sharp eye on Harris’ stance on India if she and Biden win the election.

Neelam Malhotra, an Indian American health educator in California, said she’s curious to see if Harris will risk alienating Hindus ― who make up a large portion of the South Asian diaspora ― by acknowledging and addressing the rise of Hindu fascism in India and the violent Delhi riots it caused earlier this year.

“I’m also curious how she will grapple with caste and how it manifests in the diaspora, especially since on her Indian side, she comes from a Brahmin family, which is the highest caste,” Malhorta said. “As an Indian, the answers to these questions are important to me.” 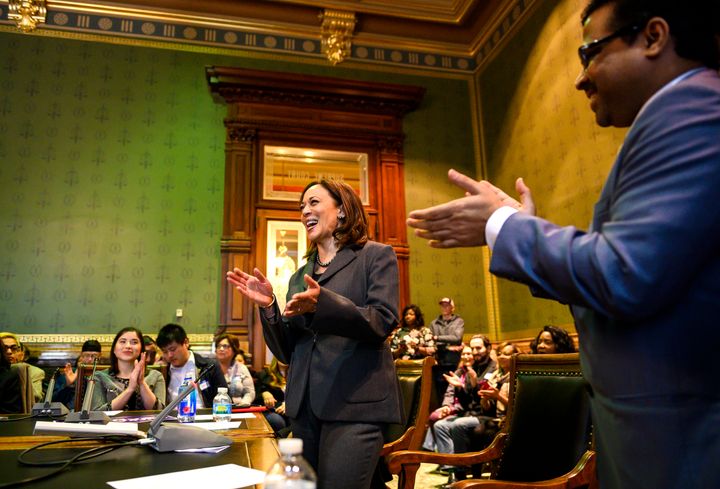 Shivam Bhatt, an Indian American tech worker in California’s Silicon Valley, said he has mixed feelings about Harris. When he sees how comfortable she is with her biracial heritage, it gives him hope for his own biracial child, he said.

Still, he’s uncomfortable with what he sees as her negative record on issues concerning trans people and with her anti-truancy efforts.

“However, I do think Harris showed that she can learn, grow, and work toward changing her behavior and attitudes towards justice and progress,” he said.

Bhatt said he’s interested to see if Harris will grapple with or address the prejudice toward Black people that persists in many South Asian countries and within the South Asian community in the U.S.

“For Harris to deal with anti-black racism both here and in India and to not only succeed but thrive, well, I’d feel good about that,” he said.

Regardless of the attitudes among South Asians about Harris’ policy record, many are genuinely excited about what her place on the Democratic ticket means for representation.

Amol Naik, an Indian American attorney from Atlanta (and a long-time Harris supporter), said he felt the headiness of the historic moment when he saw an old picture of Harris’ recently immigrated parents in which her mother is wearing a sari.

“The thought that kept coming to mind for me was how scary it must have been for her parents, like mine, to leave everything they knew to come to America in search of a better life,” he said.

“The fact that new immigrants to America doing the same thing in 2021 might see a picture of Kamala Harris on the wall as they clear the immigration process, particularly in contrast to the current occupants of that wall, is transformative and everything that is right about America,” he said.