Speaker Nancy Pelosi said she was still optimistic about the chances for an agreement, but it would be up to President Trump when it came together. And time is all but up to cement a compromise before Nov. 3. 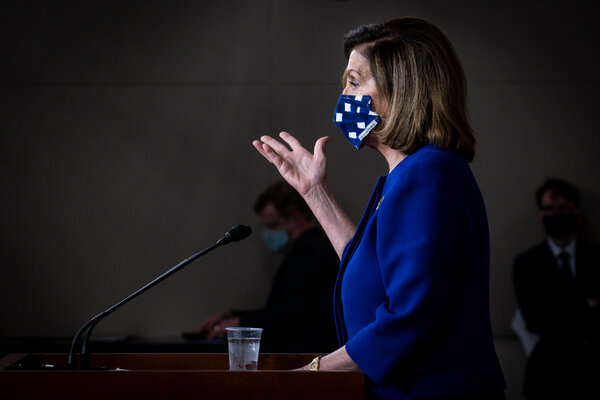 WASHINGTON — Optimism faded on Friday for a pre-election breakthrough on a stimulus measure to stabilize a shaky pandemic-era recovery, as negotiations between leading congressional Democrats and the White House limped past yet another self-imposed milestone with no deal and no resolution in sight.

In what has become something of a familiar pattern of high hopes followed by snail’s-pace progress, Speaker Nancy Pelosi insisted that she was still optimistic about reaching a deal, even as a second consecutive day passed with no discussions between her and Steven Mnuchin, the Treasury secretary, who has been her negotiating counterpart. Instead, the two sides said it was up to the other to resolve the impasse.

President Trump, who has not spoken to Ms. Pelosi in more than a year but has recently decided that he must have a stimulus deal before he faces voters on Nov. 3, declared that she “would rather wait till after the election — she thinks it’s a good point for the election.”

Mr. Mnuchin, whom Mr. Trump has deputized to offer all manner of concessions to Ms. Pelosi, lamented that the speaker was “dug in.”

“If she wants to compromise, there will be a deal,” Mr. Mnuchin said.

And Ms. Pelosi maintained she was hopeful, saying on MSNBC that “we will be able to resolve some of the objections.”