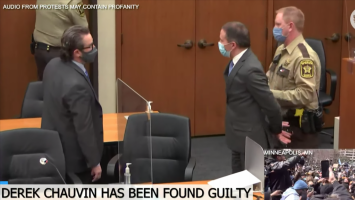 The Floyd family’s attorney Ben Crump tweeted a video of a nearly four-minute conversation they had with Biden and Vice President Kamala Harris after a jury found Chauvin guilty on all three counts for Floyd’s death last May.

“I’m feeling better now,” Biden is heard saying on a phone that Crump put on speaker with the family huddled around. “There’s nothing that’s going to make it all better. But at least now there’s some justice. And you know, I think of Gianna’s comment ‘my daddy’s going to change the world.’ We’re going to start to change it now.”

“You’re an incredible family,” Biden added. “I wish I were there just to put my arms around you.”

President Biden and VP Harris call the Floyd family after the GUILTY verdict! Thank you @POTUS & @VP for your support! We hope that we can count on you for the police reform we NEED in America! ✊🏾 pic.twitter.com/cg4V2D5tlI

Biden and Harris are scheduled to make public remarks about the Chauvin verdict Wednesday night.

Biden told the family that he was watching the announcement of the verdict with Harris, his wife, Dr. Jill Biden, and other White House aides.

“We’re all so relieved, not to just get one verdict but all three counts. It’s really important I’m anxious to see you guys. I really am.”

Later Biden invited the family to the White House.

“You better all get ready, because when we do it, we’re going to put you on Air Force One and get you here,” the president said. “I guarantee it.”

A Minneapolis jury Wednesday afternoon found Chauvin, 45, guilty of second- and third-degree murder and second-degree manslaughter in the murder of George Floyd last May.

Chauvin, who is white, was seen on video pinning Floyd, a 46-year-old Black man, to the ground with his knee for over nine minutes after police responded to a report that Floyd used a counterfeit $20 bill.

Cell phone video of the incident went viral and touched off months of protests in the U.S. and abroad condemning police brutality and calling for racial justice under the mantra of Black Lives Matter.

“You’ve got it pal,” Biden said when Crump pushed for final passage of the George Floyd Justice in Policing Act, which cleared the Democratic-controlled House in March. “That and a lot more.”

“This give a fresh shot at dealing with genuine systemic racism,” Biden said. “We’ve got a shot to change (the world). For real – for real.”

Harris thanked the Floyd family for their “courage and strength” and showing leadership, calling it “a day of justice in America.”

“And in George’s name and memory, we are going to make sure that his legacy is intact, and that history will look back at this moment and know that it was an inflection moment.”