A shipment to Pakistan was a recent move in a new phase of the administration’s pandemic response: a round-the-clock effort to clear regulatory and logistical hurdles to share doses with countries in need. 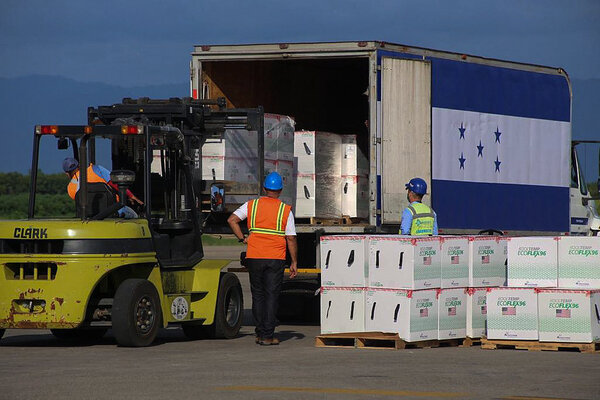 WASHINGTON — When a commercial plane carrying 2.5 million doses of Moderna’s coronavirus vaccine took off on Wednesday from Dallas for Islamabad, Pakistan, federal officials had just finished a dizzying bureaucratic back-and-forth to get them there.

The United States had arranged a donation agreement with Moderna and Covax, the year-old vaccine-sharing initiative. Covax had previously worked out indemnity agreements with Moderna, which shield the company from liability for potential harm from the vaccine. American Embassy officials in Islamabad had worked with regulators there to evaluate the Food and Drug Administration’s review of the vaccine; Pakistani regulators had to pore over reams of materials on the vaccine lots and the factory where they were made before authorizing it for use there.

Once they signed off, the result was a so-called tripartite agreement: a type of deal that has increasingly come to consume the Biden administration’s pandemic response efforts, underscoring how demand for vaccines is lagging in the United States as many countries plead for help from those with a surplus.

Amid criticism from some public health experts that President Biden’s vaccine diplomacy efforts have been slow and insufficient, the White House plans to announce on Thursday that it has fulfilled the president’s pledge to share an initial 80 million doses by June 30. More than 80 million have been formally offered to about 50 countries, the African Union and the 20-nation Caribbean consortium, with around half already shipped and the rest to be scheduled in the coming weeks, said Natalie Quillian, the Biden administration’s deputy Covid-19 response coordinator.

The dose-sharing effort has evolved into a constant churn of activity across the federal government, with deputy-level meetings several times a week and daily operations calls. The White House can hold as many as 15 country-specific calls a day, beginning at 7 a.m. and often involving the National Security Council, the Centers for Disease Control and Prevention, the State and Defense Departments and other agencies.

About 75 percent of the doses are being routed through Covax, which has shipped more than 91 million doses in all, to both wealthier and lower-income nations. The rest are being shared through bilateral deals, in which countries can retrieve and distribute doses more directly.

Researchers have estimated that 11 billion doses of vaccines are needed worldwide to potentially stamp out the coronavirus pandemic. In recent months, tens of millions of doses of the three federally authorized vaccines have been sitting unused in the United States, with more continually coming off supply lines. White House officials said they were aiming to guarantee adequate supply for Americans this spring before completing the work of shipping excess overseas.