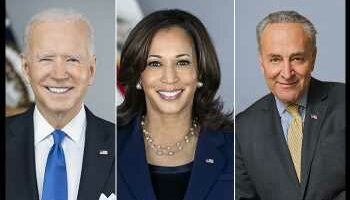 The leaders agreed on the importance of building on the economic progress being achieved in the last two years, including the lowest unemployment in 50 years, significant ground gained against inflation, and more Americans getting health coverage than ever, the White House said.

The President and the congressional leaders discussed continued stepped-up implementation of groundbreaking laws like the Inflation Reduction Act, the CHIPS and Science Act, and the Bipartisan Infrastructure Law.

They also agreed on continuing to work across the aisle with their Republican colleagues to deliver more results for the American people, while also being honest about disagreements – like the Democrats’ opposition to an unprecedented middle class tax hike, inflation-worsening tax cuts for the rich, abortion bans, or cutting Social Security and Medicare.

Speaking after the meeting, Schumer said Democrats are unified while Republicans are in chaos.

“MAGA Republicans have made commitments to put bills on the House floor. Do they want to cut Social Security? Medicare? Put your debt ceiling plan on the floor. Let Americans see,” he told reporters.