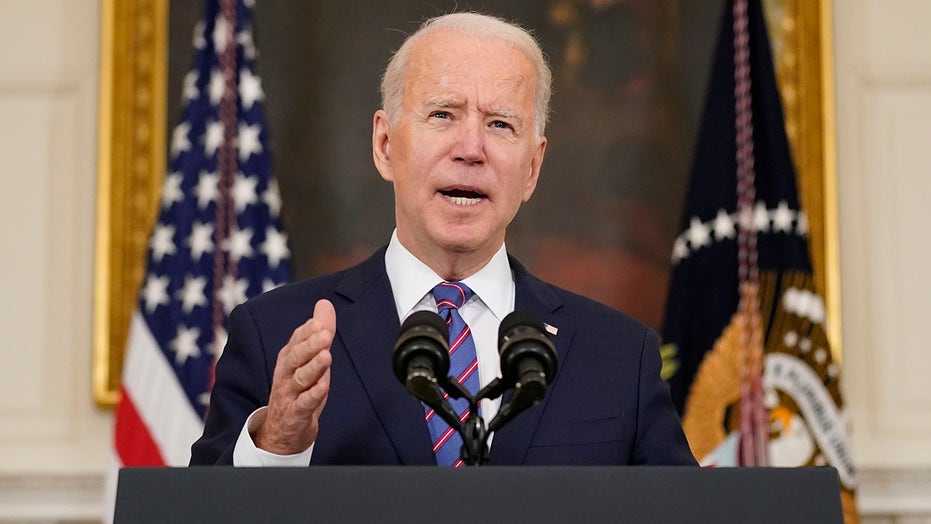 President Biden delivers remarks on the escalating crisis in Afghanistan

President Biden addressed the nation Monday, saying he stands “squarely behind” his decision to withdraw U.S. troops from Afghanistan after having a presence for 20 years, while admitting that the fall of the country to the Taliban “did unfold more quickly than we had anticipated.”

The president, speaking from the White House, said his administration has been “closely monitoring the situation on the ground in Afghanistan,” and is moving “quickly” to execute the new plans put in place.

“I stand squarely behind my decision,” the president said. “After 20 years, I’ve learned the hard way, that there was never a good time to withdraw U.S. forces.”

Biden placed blame on the Afghan leadership for the country’s plight, saying that Afghan President Ashraf Ghani had refused advice to negotiate and erroneously insisted Afghan forces would fight.

Administration officials, in the wake of Kabul’s fall to the Taliban over the weekend, have blamed Afghan security forces, maintaining that the U.S. has provided billions of dollars in support, training and equipment, with White House national security adviser Jake Sullivan saying Afghan forces, “when push came to shove, they decided not to step up and fight for their country.”

Biden said part of the reason the U.S. did not more quickly evacuate Afghan civilians who had helped Americans was that Afghan leaders had discouraged it, saying it would trigger a crisis of confidence, and some civilians did not want to leave yet.

“Truth is, this did unfold more quickly than we had anticipated,” the president nevertheless admitted, a day after the Taliban took over Afghanistan, after his administration moved forward with a withdrawal of U.S. troops from the country, signaling the end of the United States’ two-decade effort to rebuild the nation.

“American troops cannot, and should not, be fighting in a war and dying in a war that Afghan forces are not willing to fight for themselves,” Biden said, adding that the U.S. has given “every tool they could need.”

“We gave them every chance to determine their own future,” he said. “What we could not provide them was the will to fight for that future.”

“Here is what I believe to my core. It is wrong to order American troops to step up when Afghanistan’s own armed forces would not,” Biden said. “How many more generations of America’s daughters and sons would you have me send to fight Afghanistan’s civil war when Afghan troops will not?”

The president said that he has always “argued our mission should be narrowly focused on counterterrorism,” adding that he is “adamant we focus on the threats we face today in 2021, not yesterday’s threats,” noting that the terrorist threat has “metastasized well beyond Afghanistan.”

Biden went on to blame his predecessor, former President Trump, for his 2020 agreement with the Taliban, which would have seen a withdrawal of U.S. troops from the country by May 1, 2021.

“The choice I had to make, as your president, was either to follow through on that agreement, or go back to fighting the Taliban,” Biden said, warning that had he violated the agreement, there would be “no easier” or “status quo of stability without American casualties” after May 1.

Biden said he had to either follow through with the agreement or risk “escalating the conflict and sending thousands more U.S. forces lurching back into the third decade of conflict.”

The president, though, said that the U.S. would “continue to speak out for the basic rights of Afghan people, of women and girls, as we speak out all over the world.”

“I’ve been clear—human rights must be the center of our foreign policy, not the periphery,” he said. “But the way to do it is not through endless military deployments—it is through diplomacy, economic tools, and rallying the world to join us.”

At this point, Biden has authorized 6,000 U.S. troops to deploy to Afghanistan to assist in the evacuation of U.S. personnel and Afghan allies. The president touted the safe shutdown of the U.S. embassy in Kabul and the transfer of U.S. diplomats.

Biden said that the United States’ “diplomatic presence is consolidated at the airport,” and committed to evacuating thousands of American citizens who have been living and working in Afghanistan from the country this week.

“We will defend our people with devastating force, if necessary,” Biden said. “Our current military mission will be short in time, limited in scope and focused in our objectives: get our people and our allies as quickly and as safely as possible.”

The president added: “And once we have completed this mission, we will end America’s longest war after 20 years of bloodshed.”

“I am President of the United States of America, and the buck stops with me. I’m deeply saddened by the facts we now face,” Biden said. “But I do not regret my decision to end America’s warfighting in Afghanistan.”

The Taliban is pushing to restore the Islamic Emirate of Afghanistan, the formal name of the country under the Taliban rule before the militants were ousted by U.S-led forces in the wake of the 9/11 attacks, which were orchestrated by Al Qaeda while it was being sheltered by the Taliban.

Last week, though, as the Taliban seized major provinces throughout the country,  the Biden administration assessed that Kabul could fall to the Taliban within 90 days. A prior CIA assessment months ago said Kabul could fall in six months, however, officials last week said that prediction was cut in half.

The White House, at the time, said the Afghan National Defense and Security Forces had “what they need” to “fight back.”

Sources on the ground in Kabul told Fox News Monday that the Taliban have already started going house to house to look for any Afghan Special Forces who fought alongside the U.S. military.

Sources told Fox News that the Taliban have records of those who served, and are going to houses of those Afghans to begin seeking retribution.

The U.S., at this point, is struggling to keep the Kabul airport open for those still hoping to flee.

Despite the worsening security situation, the Pentagon says that Kabul Airfield has reopened for operations. U.S. military flights have resumed in Kabul. Marines and paratroopers have just landed, with 2,500 troops now on the ground and up to 3,500 by the end of the day.

Videos and images from the airport Monday showed a flood of Afghan civilians trying to force their ways onto exiting airplanes, with some Afghans reportedly falling from the sky as they clung onto departing American airplanes in a desperate effort to escape the Taliban’s rule.