Biden Throws In With Left, Leaving His Agenda in Doubt

Progressives flexed, but remain empty-handed. Moderates feel betrayed. The outcome of their battle could determine Democrats’ fate in the midterms and the success of the Biden presidency. 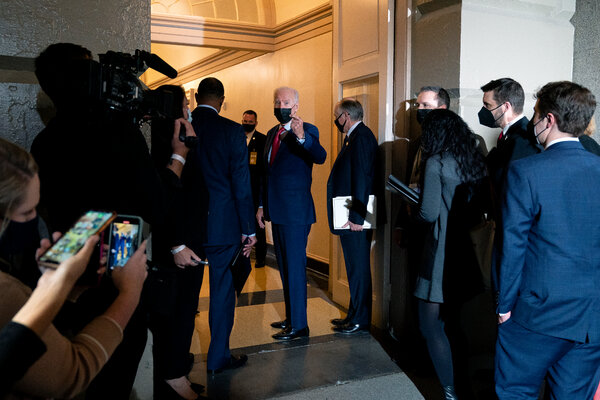 By Jonathan Martin and Jonathan Weisman

WASHINGTON — For well over a year now, President Biden’s vaunted negotiating style largely boiled down to this: I’m with you.

After he vanquished Senator Bernie Sanders of Vermont in the Democratic primary, he brought the liberal icon’s ardent supporters into the fold by embracing much of the senator’s platform even as he ran on unifying the country. When moderate Democrats came to call, he used the tones of centrism to assure them of his conciliatory bona fides.

But when Mr. Biden ventured to the Capitol on Friday to help House Democrats out of their thicket, he had to choose sides. He effectively chose the left.

“The way he is governing doesn’t reflect the skills I know he must have from his years as a legislator,” said Representative Stephanie Murphy of Florida, who had been one of the moderate Democrats demanding an immediate vote on a trillion-dollar infrastructure bill, convinced that was what the president wanted — or at least needed. She called Mr. Biden’s refusal to push harder for legislation he had embraced “disappointing and frustrating.”

“I’m not clear why he came up to the Hill,” she grumbled.

Since the president claimed his party’s nomination last year, he has nurtured the fragile peace between his party’s fractious center and left by convincing both sides he is their ally. Unified first by their shared disdain for former President Donald J. Trump, and then by Mr. Biden’s adoption of an expansive platform, the two factions remained in harmony into this year. They responded to the pandemic by passing a sweeping stimulus package in the spring.

Now, the two factions are at loggerheads — one flexing its power but as yet is empty-handed, the other feeling betrayed, both claiming they have the president on their side — and the outcome of their battle over Mr. Biden’s proposals could determine Democrats’ fate in the midterms and the success of his presidency.

That agenda consists of two sweeping domestic proposals resembling a modern Great Society: the “American Jobs Plan,” spending $1 trillion over 10 years on traditional infrastructure like roads, bridges and tunnels, and a bigger and more controversial “American Family Plan,” which the Democrats labeled “soft infrastructure” — including universal prekindergarten and community college, paid family and medical leave, child care and elder care support, and an expansion of Medicare.

But liberals feared that moderate Democrats would vote for the infrastructure bill, claim victory, and peel away from the social policy measure, so they refused to support the smaller infrastructure bill until the larger social-policy package had been passed.

Heading into last week, both the moderates and the progressives felt as if they had ironclad promises: the moderates, that a vote on infrastructure would happen before October; the liberals, that the bill, a crucial part of the president’s domestic agenda, was inextricably twinned with their higher priority, the more expansive measure addressing climate change and the frayed social safety net.