WASHINGTON – With his campaign for a $15 federal minimum wage stalled, President Joe Biden is moving to boost the hourly pay of hundreds of thousands of federal contractors.

Biden is set to sign an executive order on Tuesday requiring employers to pay a $15 minimum wage to workers covered under a federal contract. Right now, the minimum wage for workers under federal contact is $10.95 per hour.

A senior administration official who described Biden’s plan to reporters on Monday said the higher wage would boost the pay for workers who are considered critical to federal government functions, such as cleaning professionals and maintenance workers, nursing assistants who care for the nation’s veterans, cafeteria and food service workers who provide meals to military members, and laborers who build and repair federal infrastructure.

The official could not say how many workers would see a pay increase but estimated the number to be hundreds of thousands.

An analysis concluded that boosting the minimum wage won’t result in increased costs to taxpayers because the higher wage would raise productivity and lower other costs such as supervisory and training expenses, the official said. 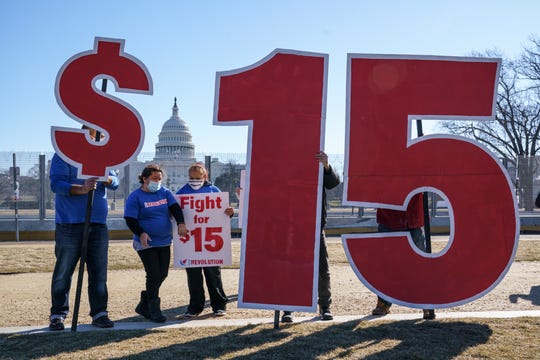 Federal agencies will be required to incorporate the $15 minimum wage into existing contracts when employers exercise their option to extend such pacts, which often occurs annually. The minimum wage will be indexed to inflation so that every year after 2022 it will be automatically adjusted to reflect changes in the cost of living.

The order also will do away with the separate wage system for tipped contract workers. Right now, tipped employees working under federal contract are guaranteed a cash wage of at least $7.65 an hour. If a worker’s tips combined with the required cash wage are less than $10.95 an hour – the current minimum wage for federal contractors – their employers must make up the difference.

Biden pledged during last year’s presidential campaign to push for a $15 minimum but has faced opposition from congressional Republicans and some moderate Democrats who fear employers would cut jobs if forced to pay higher wages.

Biden planned to include the minimum wage hike in a $1.9 trillion COVID-relief package that was his first major piece of legislation as president. But Congress stripped the proposal from the package after the Senate parliamentarian ruled it did not qualify under the special budget rules the Senate used to pass the legislation.

Biden has said he’s open to pursuing a $15 minimum wage as a separate piece of legislation. But getting a separate bill approved would be an even bigger hurdle because 60 votes would be needed in the Senate to overcome a filibuster – a nearly impossible threshold to cross given the Senate’s 50-50 partisan split.

On his second day in office, Biden laid the groundwork for raising the minimum wage to $15 for federal contractors.

He signed an executive order on Jan. 22 directing his administration to start the work that would allow him to issue an order in his first 100 days requiring federal contractors to pay their workers a $15 minimum wage and give them emergency paid leave. Agencies were tasked with reviewing which federal employees earn less than $15 an hour and developing recommendations for boosting their pay.

The order Biden will sign on Tuesday doesn’t cover emergency paid leave. The administration may have announcement on that soon, the senior administration official said.