“It isn’t an overnight problem to be solved,” Mr. Vilsack said, according to his former deputy chief of staff, Anne McMillan, who recounted the conversation. “It is a long-term investment in understanding, appreciating and respecting rural America.”

This month, Mr. Biden put Mr. Vilsack in charge of that task, tapping him to reprise the role of agriculture secretary that he held for eight years in the Obama administration and making him the Biden administration’s chief emissary to America’s farmers. But for a nominee with extensive experience, the pushback against Mr. Vilsack has been fierce, laying bare the divisions within the Democratic Party and the resistance to corporate influence that is simmering among progressives.

If confirmed, Mr. Vilsack, a former Iowa governor, will retake the helm of the Agriculture Department at a time when America’s farmers have been battered by Mr. Trump’s trade wars and the effects of the coronavirus pandemic.

Smaller farmers in particular have been hit hard and farm bankruptcies have increased over the past few years, even with record amounts of federal assistance. Family-owned dairy producers have faced an especially difficult stretch, with prices declining because of an oversupply of milk. In Wisconsin, half of the herds have disappeared in the last 15 years.

Mr. Vilsack faces a steep challenge, with progressive and environmental groups warning that he is too friendly with big industrial agriculture businesses. Furthermore, rural farmers, who voted overwhelmingly for Mr. Trump, are wary that more regulations are in store under a Democratic administration.

Farm states have been a stronghold for Republicans over the past decade and — despite frustration with Mr. Trump among farmers over his trade policies — the president still dominated in heavily rural areas in the 2020 election, losing some farm states like Wisconsin because of the strength of Mr. Biden’s support in cities and suburbs.

Eager to make inroads in rural America, some Democrats fear that Mr. Vilsack is not the ideal ambassador. Critics of Mr. Vilsack, who recently earned $1 million a year as a lobbyist for the dairy industry, worry that he will favor big industry over independent farmers and not do enough to ensure worker safety.

Environmental and agricultural policy groups have derided him as being too cozy with “Big Ag,” pointing to the rapid consolidation in the farm sector that occurred under his watch, when companies such as Monsanto and Bayer merged. Food safety and labor advocates also criticized his decision as secretary to allow a significant increase in slaughter line speeds in poultry plants, which can increase the risk of injuries to workers, along with a revamp of the chicken inspection process to allow meatpacking employees to perform some of the duties previously carried out by government inspectors.

“If past is prologue we have strong concerns that he will continue to do bidding of industry,” said Zach Corrigan, a senior staff lawyer at Food & Water Watch, a consumer and environmental watchdog group, which opposes Mr. Vilsack’s nomination.

“I think he’ll fold under pressure from the ag lobby, the subsidy lobby and big agriculture,” said Ken Cook, president of Environmental Working Group, a nonpartisan organization that is critical of industrial agriculture. “I really do feel as if we needed fresh leadership there on a number of grounds.”

While many farm groups such as the National Farmers Union and Feeding America have expressed support for his nomination, some farmers are wary that the Biden administration could herald new and onerous regulations.

“Probably more rules instead of less rules,” said John Heisdorffer Jr., an Iowa soybean farmer and former president of the American Soybean Association. “In the farming community, it seems like we get ruled to death.”

Mr. Vilsack has faced particular criticism for the fading fortunes of Black farmers, who have long complained of discrimination when it comes to land and credit access. He also was at the center of a racial firestorm during the Obama administration. In 2010, he hastily fired Shirley Sherrod, a Black Agriculture Department official, after a conservative blogger released a misleading video clip that appeared to show her admitting antipathy toward a white farmer. He later apologized and tried to rehire her.

Mr. Vilsack rejoins the Agriculture Department in a much different climate than during his eight years under Mr. Obama. The pandemic has put intense focus on the struggles and dangers of employees of meatpacking plants. Thousands of workers became ill with the coronavirus after many plants failed to take basic precautions to protect them. 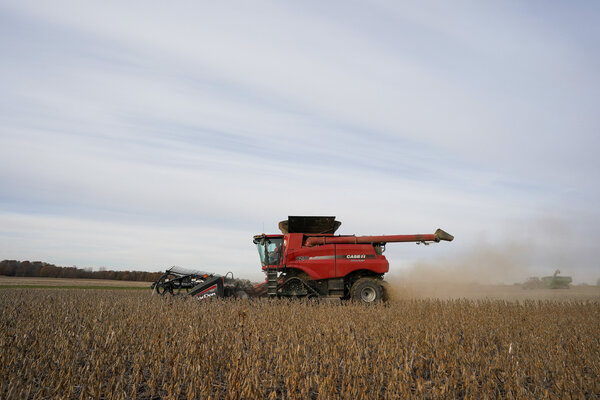 In late April, the Trump administration took the unusual step of issuing an executive order that effectively forced meatpacking plants to stay open even if virus cases were rising. The administration claimed the move was intended to protect the nation’s meat supply, which the industry said had been jeopardized by plant closures. So far, though, there has been no evidence of widespread shortages.

“Because of the experience of the pandemic, there are different expectations for the secretary of agriculture than there were during Tom Vilsack’s prior service. There must be heightened priority given to the safety and needs of the workers who produce our food supply as well as all to those Americans who face food insecurity,” said Stuart Appelbaum, president of the Retail, Wholesale and Department Store Union, which represents poultry workers at plants across the South.

In his first stint as secretary, Mr. Vilsack disappointed advocates for small farmers and consumers who hoped he would address consolidation of the agriculture and meatpacking industries, in which a few huge corporations control everything from seeds to slaughterhouses.

Early in the Obama administration, Mr. Vilsack vowed to address the struggles of smaller farms and to help lift the broader rural economy.

“The central question is, are farmers and ranchers in this country currently getting a fair shake?” Mr. Vilsack told an audience of farmers and agricultural experts in Iowa in 2010.

Throughout that year, Mr. Vilsack held a sort of listening tour, making stops in Normal, Ala., to discuss the poultry industry and Fort Collins, Colo., to talk about beef. He was joined in this effort by then-Attorney General Eric H. Holder Jr. and his top antitrust official, Christine Varney, raising the specter that Mr. Obama was serious about reining in big agriculture and the meat industry.

At the time, Charles E. Grassley, a fellow Iowan and powerful Republican senator, praised Mr. Vilsack’s efforts, saying he had never seen this level of cooperation between the U.S.D.A. and Justice Department, which was “badly needed” to deal with the consolidation issue.

In the end, Mr. Vilsack and Mr. Obama’s Justice Department did not mount an antitrust effort. “There was nothing,” Mr. Corrigan said. “It shriveled up and went away.”

The pandemic has also exposed, in new ways, how the industry’s consolidation can leave the nation’s food supply vulnerable to disruptions. The closure of just a few slaughterhouses, even for a few weeks in April, reduced pork production by as much 5 percent, leading to the mass killings and waste of thousands of hogs that could not be processed.

Still, breaking up the large meatpacking companies is not likely to be on Mr. Vilsack’s priority list.

“The next couple of years the priority will be getting the economy on its feet,” said Marc Perrone, president of the United Food and Commercial Workers union, which represents thousands of meatpacking workers.

Since leaving the Obama administration, Mr. Vilsack has been the chief executive of the U.S. Dairy Export Council, a lobbying group. In an interview with the Iowa Starting Line podcast in April 2019, Mr. Vilsack made clear his opposition to policies that were being promoted by other Democratic presidential candidates that would break up corporate agriculture conglomerates.

“There are a substantial number of people hired and employed by those businesses here in Iowa,” Mr. Vilsack said. “You’re essentially saying to those folks, ‘You might be out of a job.’ That to me is not a winning message.”

Mr. Vilsack said that such ideas tend to come from experts at “think tanks in urban centers” who have had little experience with rural places and rural people. He said small farmers would benefit from policies that would reduce their costs and give them greater control over their ability to set prices and connect directly with buyers.

Mr. Vilsack is expected to be a sharp contrast with Mr. Trump’s agriculture secretary, Sonny Perdue, who received praise from some farmers for lavishing them with subsidies, but received criticism within the department for sidelining career staff and politicizing economic research. Last year, Mr. Perdue drew the ire of many of his in-house economists when he decided to move the agency’s agricultural research unit from Washington to Kansas City, leading to wave of departures and stalling its work.

To those who have worked with Mr. Vilsack, the notion that he is merely an ally of industrial farming is unfair. Ms. McMillan, the former deputy chief of staff, said that her one-time boss was always mindful of the plight of small farmers but that he needed to also look out for the broader industry.

“His job required him to advance rural America and the ag industry and feed people,” she said. “You can’t not engage with the entire spectrum.”