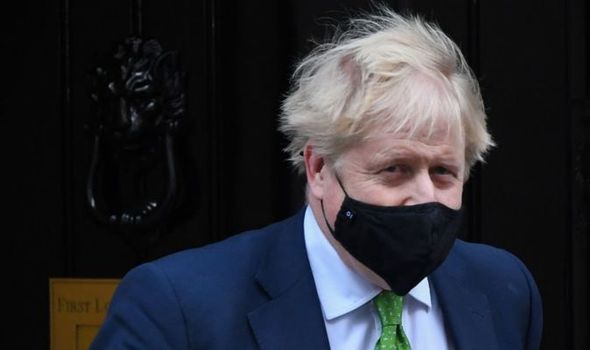 William Wragg caused fresh trouble for the Prime Minister yesterday when he said dirty tactics were being used to bring critics into line. Mr Johnson dismissed the allegations and insisted he was focused on steering the country through the pandemic – as it appeared a backbench rebellion was in retreat.

He used a hearing of the Commons committee he chairs to claim MPs were being intimidated.

But Mr Johnson rubbished the claims during a visit to Rutherford Diagnostics Centre in Taunton, Somerset, yesterday.

He said: “I’ve seen no evidence to support any of those allegations.

What I am focused on is what we’re doing to deal with the priority of the British people, which is coming through Covid.”

Mr Wragg, chairman of the Commons Public Administration and Constitutional Affairs Committee, said the Government Whips’ Office – the officials who manage party discipline – were threatening to withdraw public funding from MPs’ constituencies, which may have breached the ministerial code.

He added that the “intimidation” of MPs was a “serious matter” and claimed the “reports of which I am aware would seem to constitute blackmail”.

Mr Wragg said: “As such it would be my general advice to colleagues to report these matters to the Speaker of the House of Commons and the Commissioner of Metropolitan Police.”

Last week Mr Wragg called for the PM to resign.

But Ms Dorries said the whips had no power over constituencies and said: “It is just attentionseeking behaviour from William Wragg, who has been a constant critic of the Prime Minister who delivered us the greatest majority since Margaret Thatcher.”

Senior Tory Michael Fabricant added: “It was wholly improper of William Wragg to misuse his position as chairman of a select committee to make unsubstantiated claims against the whips as part of his longstanding and well-known vendetta against Boris.

Tory turncoat Christian Wakeford, who defected to Labour on Wednesday in protest at Mr Johnson’s leadership, said he was threatened about the loss of a school in his Bury South constituency if he did not toe the line.

He claimed: “I was threatened that I would not get the school for Radcliffe if I did not vote in one particular way. This is a town that’s not had a high school for the best part of 10 years.”

But Mr Wakeford’s departure for Labour has “calmed nerves” after weeks of turmoil, according to one Conservative MP.

Backbencher Andrew Percy said: “People have recognised that this constant navel-gazing and internal debating is only to the advantage of our political opponents. The Prime Minister is probably thanking Christian for what he did. It’s made people think again, think twice.”

Tory MP Dehenna Davison denied being one of the ringleaders of the so-called “Pork Pie Plot” to oust the PM over the “partygate” allegations. It was claimed she was one of the rebel Red Wall MPs trying to force a vote of no-confidence in Mr Johnson.

But Ms Davison, elected for the first time in 2019, said the suggestion was “bonkers” and tweeted: “No, I’m not leading a coup.” Her denial came as Mr Johnson again urged MPs to wait for the outcome of the inquiry into alleged lockdown breaches being carried out by top civil servant Sue Gray.

It was claimed yesterday that Ms Gray has found an email warning the PM’s principal private secretary Martin Reynolds against holding a curbs-defying party at No 10.

The message, sent by a senior official, insisted it “should be cancelled because it broke the rules”, according to ITV. Sajid Javid said the disclosures had been “damaging” to the UK’s democracy.

The Health Secretary said anyone found to have broken the rules should be disciplined and the parties the night before Prince Philip’s funeral were “completely wrong”.

The greatest escape artist in British political history seems to have done it again.

Earlier in the week, Boris Johnson’s premiership looked to be doomed, as a hysterical mood of crisis engulfed the Tory party in the wake of the scandal over lockdown breaches by Downing Street.

In Parliament the air was thick with talk of conspiracy. On the airwaves, rebel MPs lined up to denounce him.

A vote of no confidence seemed to be imminent, while the Prime Minister looked a broken man as he repeatedly expressed his contrition in interviews.

Yet today the atmosphere has been transformed. Remarkably, after the hammering he has taken, Johnson is now in a stronger position than he was two days ago. It is his internal foes who are now on the defensive, bleating about intimidation by the Conservative whips and some of them withdrawing the letters of no confidence that they had earlier submitted to Sir Graham Brady, chairman of the backbench 1922 Committee.

How has Boris achieved this astonishing turnaround? Part of the answer lies in his innate resilience.

On Wednesday, contrary to all expectations, he gave a heroically combative performance at Prime Minister’s Questions, as if he had consciously decided to pull himself together for the fight.

But he was helped by a series of other factors. One was the extraordinary defection of Bury South MP Christian Wakeford to the Labour party, which had the effect of uniting Tory ranks.

Another was the naivety among the 2019 intake, who have been the most vociferous of Johnson’s critics. Never having experienced a mid-term slump before, they panicked and failed to develop a clear strategy to succeed in their goal.

Just as counter-productive was the attack in the Commons by David Davis. Quoting the Tory statesman Leo Amery, he exclaimed at Johnson, “in the name of God go” but the intervention smacked of theatricality rather than genuine emotion.

The case against Johnson was further weakened by the raft of good news this week, like the booming employment figures and the end of Covid restrictions.

The drumbeat of war from Ukraine, combined with President Biden’s breakdown in authority, also put the plotting into perspective.

Many Tories stepped back from the brink, sensing that this is not the moment for a leadership contest.

Johnson is not out of trouble. The legacy of the scandal has inflicted permanent damage. If next week’s report by Sue Gray is damning about his role in partygate, he will have to quit.

Even if he survives, he has a huge task in rebuilding trust, as well as on delivering his agenda of levelling up the country against a troubled economic backdrop of rising inflation and soaring energy prices.

But at the very least, Houdini Boris has bought himself more time.