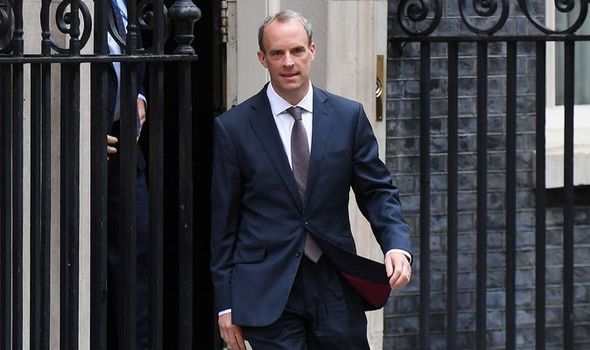 The Prime Minister yesterday insisted the Foreign Secretary and the rest of the Government were “working around the clock” on the evacuation of Kabul. He also declared his “full confidence” in the beleaguered Cabinet minister.

Mr Raab has been under pressure to quit following claims he dodged a crucial phone call about rescuing Afghan interpreters from the Taliban while holidaying at an up-market resort on Crete.

Asked if he had full confidence in him, Mr Johnson said: “Absolutely, and I can tell you that the whole of the Government has been working virtually around the clock to do what we can to sort it out, to deal with a situation that has been long in gestation and to make sure we get as many people back as possible.”

Other Tory colleagues rallied around Mr Raab, describing him as a “workaholic” who never shirked his duties.

He came out fighting by dismissing the allegations against him as “inaccurate media reporting”.

The Foreign Secretary said the proposal from his officials for a phone conversation with Afghan foreign minister Hanif Atmar had been “quickly overtaken by events” in the fast-moving crisis.

He delegated the call to a junior minister to focus on ensuring security at Kabul airport, he added.

In a statement released by the Foreign, Commonwealth and Development Office, he said: “The UK Government’s overriding priority has been to secure Kabul airport so that flights can leave.

“On Friday afternoon, 13 August, advice was put to my private office recommending a call to the Afghan Foreign Minister. This was quickly overtaken by events.

“The call was delegated to a Minister of State because I was prioritising security and capacity at the airport on the direct advice of theDirector and the Director General overseeing the crisis response.

“In any event, the Afghan Foreign Minister was unable to take the call because of the rapidly deteriorating situation.”

He added: “The Government’s approach to prioritise security at the airport was the right one.

“As a result, 204 UK nationals and their families, Afghan staff and other countries’ citizens were evacuated on Monday morning. Since then, 1,635 have been evacuated. I pay tribute to the excellent team we have in place, and we continue to prioritise what is required to evacuate people.”

Releasing his statement on Twitter, Mr Raab said it was drafted to respond to “the inaccurate media reporting over recent days”.

Meanwhile Mr Johnson reiterated the Government’s message that Britain is “working tirelessly” to help Afghans who previously helped or worked for the UK.

Other top Tories also backed Mr Raab, with Defence Minister James Heappey telling BBC Radio 4: “The reality is no one phone call would have changed the trajectory of either the speed of collapse of the Afghan government nor the speed of which we’ve been able to get the airlift up and running.

“My focus and the focus of my colleagues around Government right now is in making sure we can extract as many people as possible from Kabul.

“I don’t know why the call wasn’t made, I don’t know the detail of who should have made the call and who shouldn’t have done, but I am certain that by the time it was recommended, the trajectory was set.”

Foreign Office Minister James Cleverly tweeted: “I wasn’t going to wade in on this because I know it will look sycophantic but anyone who has worked with or for Dominic Raab knows he’s a workaholic who takes his responsibility incredibly seriously.”

Backbencher Sir Roger Gale said: “This is an anti-Raab witch hunt, and I don’t like it.”

And former Brexit secretary David Davis said: “I am getting very irritated by the 20:20 hindsight briefing against Dominic Raab.

“Firstly, nobody was predicting last Friday what was going to happen two days later. Not US intelligence, not our agencies, and certainly not the covert critics of Mr Raab.

“As the Foreign Secretary is possibly the most workaholic minister in this government, this is a very odd criticism.”

She said: “It should have been an absolute priority to speak to the Afghan government and set out the immediate actions necessary to ensure the safe evacuation of Britons and Afghans.

“Who knows how many more people might have been saved in the hours leading up to the fall of Kabul if the Foreign Secretary had made the call he was advised to?

“The Foreign Secretary’s statement serves only to confirm his decision to abdicate responsibility and grossly neglect his duties.”