During the call, the two leaders discussed their intention to maintain solid trans-Atlantic ties, especially ahead of the UK holding the G7 summit and the UN Climate Change Conference next year. But in a warning to the Prime Minister, Mr Biden also reminded him of the need to protect the peace process in Ireland. Following the exchange of niceties, Mr Biden’s administration highlighted the demand in an official readout.

It said: “The President-elect expressed his intent in cooperating with the UK, NATO, and the EU on shared-trans-Atlantic priorities, and reaffirmed his support for the Good Friday Agreement in Northern Ireland.”

The warning was not included in No10’s official readout of the call.

Mr Biden’s remarks were in reference to the UK Internal Market Bill, which could impose a hard border in the island of Ireland unless certain clauses are removed.

The Bill has caused uproar in the EU and US since it was revealed by No10 because it violated elements of the Withdrawal Agreement, which was signed in October.

Before winning the election, Mr Biden had warned any US-UK trade deal will be contingent on the maintenance of peace in Ireland.

Mr Biden, who is of Irish heritage, said: “We can’t allow the Good Friday Agreement that brought peace to Northern Ireland to become a casualty of Brexit. 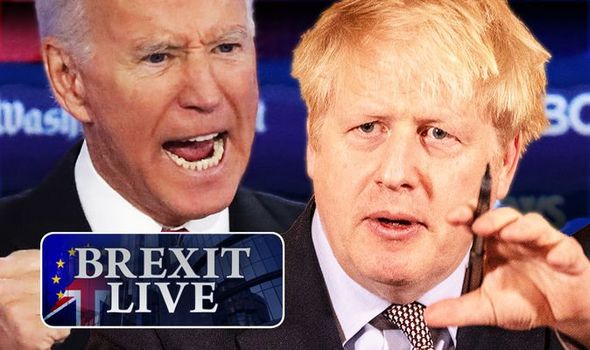 UK officials have insisted the purpose of the Internal Market Bill is to provide a necessary safety net if Brexit talks fail and to maintain the integrity of trade between the devolved nations.

Mr Johnson also expressed this belief to EU Commission President, Urusla von der Leyen, on Saturday and insisted peace in Northern Ireland would not be hindered.

However, if the EU and UK agree a trade deal, some of the disagreements over the Bill will cease to apply.

On Monday night, the House of Lords voted for two amendments demanding the controversial clauses in relation to state aid and customs-exit declarations, be removed.

The Bill will now be sent back to the Commons where the amendments could be re-tabled, although Downing Street has confirmed this will not happen until the end of this month.

The President-elect shared a 25-minute phone call with the Prime Minister on Tuesday where the pair discussed their intent to maintain security cooperation, and the UK’s hosting of the UN Climate Change Conference and G7 Summit.

Amid the uproar over the UK Internal Market Bill and its impacts over a US-UK trade deal, the President-elect also shared his desire to maintain the Good Friday Agreement.

Mr Biden said: “The President-elect expressed his intent in cooperating with the UK, NATO, and the EU on shared-trans-Atlantic priorities, and reaffirmed his support for the Good Friday Agreement in Northern Ireland.”

Mr Biden believes by overriding parts of the Northern Ireland Protocol – included within the withdrawal agreement – as a result of the UK Internal Market Bill, it could effectively move the trade border from the Irish Sea to Ireland.

This would then place a border between Northern Ireland and the Republic, thus causing him to warn of the implications on a US-UK trade deal.

Covid-19 coronavirus: Queenstown is a tourist town with no tourists – Darren Lovell