Democratic socialist India Walton pulled off a stunning upset in Buffalo’s mayoral primary election last week, putting her on the brink of becoming the next mayor in the heavily Democratic city.

If she wins, she will become the first female mayor and first socialist mayor of New York’s second-largest city.

But she now has some added competition.

On Monday, Byron Brown, the incumbent who lost to Walton last week, announced he would launch a write-in campaign for the general election.

“Write down Byron Brown,” he said at a news conference Monday, adding, “Let’s be clear that until November there is no mayor-elect. There is only one mayor of Buffalo, and that is Mayor Byron Brown.”

Brown’s loss was a shock to many Buffalonians. While Walton had the backing of the powerful Buffalo teachers union, Brown raised far more money, backed by the business community and Democratic politicians. He’s a four-term incumbent and a close ally of Gov. Andrew Cuomo (D-N.Y.).

In a statement Monday, Walton tied Brown to the conservative lightning rod.

“Brown can attempt to distance himself from Paladino all he wants, but it is clear who is really behind this campaign,” she said. “We urge Brown to accept the will of voters, end this futile campaign, and help us work towards a seamless transition. It would be a shame for Brown to ruin his legacy by partnering with right-wing real estate developers in this pointless effort.”

Brown’s move now puts state and local Democratic leaders, who pledged to support Walton after her win, in the hot seat. They have to decide how much backing they’ll really give Walton, when many of them preferred Brown in the primary. 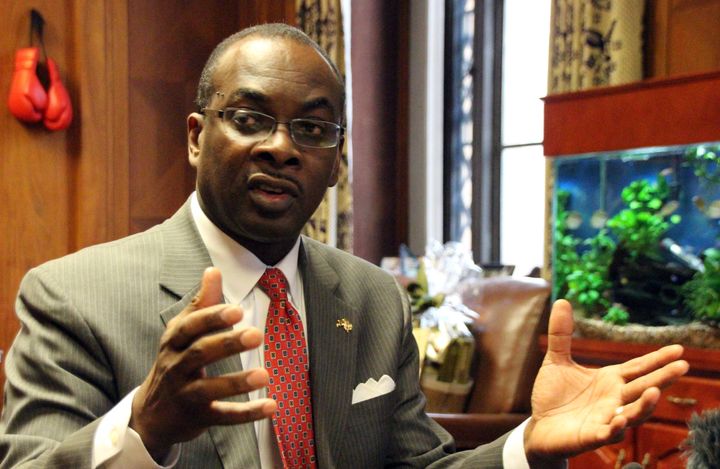 Erie County Democratic Committee Chairman Jeremy Zellner told WIVB-TV in Buffalo that the party would not back Brown in his write-in effort.

Shortly after Brown’s announcement, Zellner also posted to Twitter a photo of himself with Walton after a meeting they had at party headquarters on Monday. “We are with her, now and through the general election in the fall,” he tweeted.

For their part, local Republicans expressed sympathy for Brown, suggesting that his path back to City Hall could run through a coalition of centrist Democrats and Republicans, who could not vote in the June 22 Democratic primary.

Asked about Brown’s write-in campaign, New York Republican Party Chairman Nick Langworthy, who previously led the Erie County GOP, told Politico, “A lot of people I know are strongly supporting him and urging him to carry on.”

In an interview with a local radio station after his announcement, Brown would not categorically rule out accepting an official Republican endorsement in his race.

And in an effort to illustrate that write-in campaigns can be competitive, Brown singled out the successful 2010 run of Sen. Lisa Murkowski, an Alaska Republican, and the 2013 victory of Detroit Mayor Mike Duggan, a Republican-turned-Democrat.

In addition, Brown, who did not bother to debate Walton during the primary, on Monday previewed a more conservative, combative tone he plans to employ against Walton in the general election. He engaged in “red-baiting” ― an explicit appeal to people’s Cold War-era fears about socialism, incorrectly suggesting that Walton’s brand of “democratic socialism” is incompatible with democracy.

“We know the difference between socialism and democracy,” he added. “We are going to fight for democracy in the city of Buffalo.”

Walton, an impoverished single mother-turned-registered nurse, union activist and community organization leader, ran against Brown to ensure there is more affordable housing and police accountability in the city.

Brown has endured criticism from progressives and residents of neighborhoods in Buffalo’s predominantly Black and low-income East Side for presiding over gentrification that these critics believe has not benefited the communities that predate new arrivals.

“As a person who is a career politician I think he’s a little bit detached from what folks on the ground are feeling,” she said after announcing her run in December.

Brown defended his record on Monday, boasting that he had run the most racially diverse administration in Buffalo history, and reduced the city’s tax rate to its lowest level in 25 years.

Brown also preemptively sought to rebut the idea that his write-in candidacy would undermine the will of Democratic primary voters who already nominated Walton. He claimed that less than 20% of registered Democrats voted in last Tuesday’s primary.

In fact, it was just over 20% of voters, not including the absentee ballots that have yet to be counted. Even 20% is not extraordinarily low by Buffalo standards; Brown won the primary in 2009 with a Democratic turnout of 20%.

The New York Working Families Party, which played a critical role in Walton’s primary win, argued that Brown’s decision to run in the general election reflects a refusal to respect the will of the voters.

“We’ve seen the damage done to our democracy when leaders attempt to override the will of the voters,” Sochia Nnaemeka, director of the New York WFP, said in a statement. “We would hope that Byron Brown — a leading Democrat in the state — would not align himself with the likes of Carl Paladino and billionaire real estate interests to reject the outcome of this election.”