Caitlyn Jenner argues politics must stay out of Olympics

Caitlyn Jenner speaks out on witnessing the 1972 Munich Olympic massacre play out on ‘Gutfeld!’

California gubernatorial candidate Caitlyn Jenner on Tuesday filed a motion to intervene in a lawsuit between Gov. Gavin Newsom and California’s secretary of state.

Newsom, who is facing a recall election brought on by his handling of the coronavirus pandemic, sued the state elections chief late last month in an effort to get his party affiliation to appear next to his name on the ballot.

The Democratic governor was supposed to indicate whether he wanted his party preference on the ballot back in February 2020, when he first responded to the recall petition. That requirement was part of a new law he signed that took effect in January 2020.

Secretary of State Shirley Weber’s office said it has a duty to accept timely filed documents and anything after the deadline “requires judicial resolution.”

Jenner, who is one of several Republicans running to unseat Newsom, said she and her campaign filed the motion to intervene in the lawsuit to “ensure the laws governing the recall election are enforced and uniformly applies, as the Secretary of State likely will not mount a robust, good-faith defense against Newsom’s request for preferential treatment.”

“Throughout his time as governor, Gavin Newsom has always believed he is above the law,” Jenner said in a press release. “Whether it was when he shut us down while he lived it up at the French Laundry or when he prevented our children from in-person classroom learning while he sent his own children to in-person classrooms at a private school, this is another example of the hypocrisy of Gavin Newsom.”

Though many voters know Newsom is a Democrat, the paperwork error is an embarrassing mistake for his campaign, which last year also failed to challenge a court ruling that gave recall proponents more time to collect signatures. 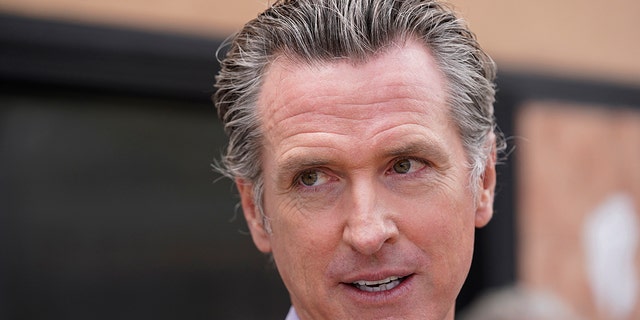 Newsom’s campaign has painted the recall as a partisan effort driven by extremist Republicans and having the word “Democratic” next to his name would remind voters of that, said Darry Sragow, a former Democratic political strategist who runs the nonpartisan California Target Book, which tracks elections.

In the past, those targeted in a recall didn’t have the option to list their party preference. Democrats in the state Legislature voted to change that in 2019 after a state senator was recalled, arguing it gives voters important information.

Jenner accused Newsom of suing the Secretary of State to “clean up his own mistake because he did not comply with mandatory requirements of the recall election.”

“We are a nation of rules and laws, and when an elected official like Gavin Newsom believes he is above the law, the foundation of this country is jeopardized,” Jenner said. “The people of California have a right to know why Newsom will be asking for preferential treatment if the Secretary of State will simply bow down to his demands. One-party rule in Sacramento has created an environment where Newsom and his special interest friends can simply flout the rule of law.”

On Monday, Newsom signed a law that changes the recall rules in an effort to speed up the election. It essentially bypasses a legislative review of costs associated with the recall, because lawmakers already agreed to give counties $215 million to administer the election.

The election, scheduled for Sept. 14, will be a marquee contest with national implications, watched closely as a barometer of the public mood heading toward the 2022 elections.

The date was set by Lt. Gov. Eleni Kounalakis, a Democrat, after election officials certified that enough valid petition signatures had been turned in to qualify the election for the ballot.

Fox News has reached out to both the secretary of state’s office and the office of Gov. Newsom but did not hear back before publication.