The California state Senate unanimously passed a landmark bill on Thursday that would allow Los Angeles County to return oceanfront land seized from former Black owners Willa and Charles Bruce in the 1920s to their descendants, according to reports.

The bill next heads to Gov. Gavin Newsom’s desk and while his office hasn’t indicated if he’ll sign it, the bill is widely popular, according to the Los Angeles Daily News.

If signed, it would reportedly be the first law returning land to former Black owners to make amends for past discriminatory policies.

The effort started last summer during the anti-racism protest movement and after a petition demanding reparations at the beach circulated, the Daily News reported.

The bill “represents economic and historic justice,” state Sen. Steven Bradford told the Daily News, “and is a model of what reparations can truly look like.” 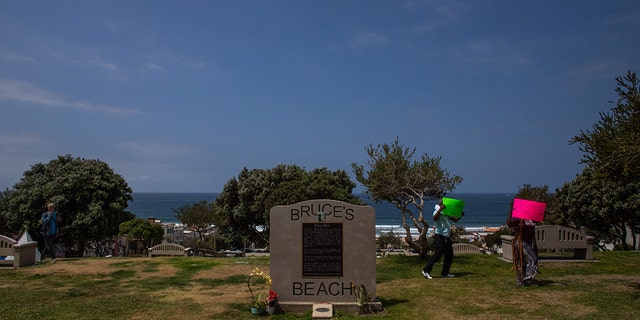 The California state Senate unanimously passed a landmark bill on Thursday that would allow Los Angeles County to return oceanfront land seized from former Black owners Willa and Charles Bruce in the 1920s to their descendants, according to reports.
(Photo by APU GOMES/AFP via Getty Images)

The Bruces bought the two parcels of land in Los Angeles County’s Manhattan Beach in 1912 and ran a resort that catered to Black people.

The Bruces and other Black families faced harassment from racist White neighbors and in 1924 the city condemned the Black-owned lots and seized them through eminent domain to create a park – now Bruce’s Beach Park.

The couple sued for racial discrimination and eventually received $14,500 but never got their land back, according to The Los Angeles Times.

In 1948, Manhattan Beach gave the Bruces’ land to the state and in 1995, the state gave it to Los Angeles County, which is not legally allowed to give it back to the Bruces, according to the Daily News. The bill would change that.

“I’m elated, walking on water right now,” Duane Shepard, a distant descendant of the Bruces said Thursday. “This is one of the greatest things in American history right now.”

“This is going to be the start of something really big for our people now,” he added, the Daily News reported.

“This is the first time a government has done anything like this and there were a lot of questions about how it would work,” Los Angeles County Supervisor Janice Hahn said last summer, speaking to the complications in assessing the land’s worth, determining the heirs, moving the current lifeguard station and other issues.