Republican California gubernatorial candidate Kevin Faulconer unveiled his plan to fix the state’s homelessness crisis Tuesday, just over a month after Democratic Gov. Gavin Newsom took heat for his plan that breaks down to spending roughly $75,000 per homeless person.

“The governor has failed. He called himself the homeless czar,” Faulconer told Fox News in an interview. “You can throw all the money in the world at this. If you don’t have the political will to make a difference … it’s not going to change.”

“You’re seeing the continued explosion of homelessness in every part of the state. We took firm, compassionate action in San Diego,” Faulconer said. “We care enough about people not to let them die on the streets in a tent.”

His four-part plan includes passing a law giving Californians a “right to shelter”; returning the use of public spaces for everyone; focus on helping homeless veterans get housing and auditing the effectiveness of mental health and substance abuse programs for homeless people.

Faulconer said he will sign executive orders to establish a network of state-led shelters, support the cleanup of homeless encampments at state property, like beaches and parks, and create a statewide program to help veterans modeled on San Diego’s “Housing our Heroes” program.

Faulconer said he didn’t have an exact amount for the cost of his plan.

“We’re going to spend what it takes to solve the problem,” he said. “We have a $75 billion surplus in Sacramento. … When it’s important, you provide funding for it.”

“Eleven thousand homeless veterans. This takes real action, not rhetoric. I have a proven, firm approach that worked in San Diego. It’s time to take this statewide. The time for excuses and political correctness is over,” Faulconer continued.

Faulconer said the homelessness crisis is leading to Californians “voting with their feet” and leaving the state. He pointed to the situation in Los Angeles’ Venice Beach. 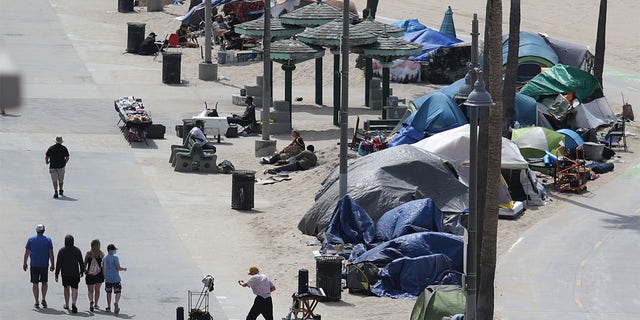 Last week, Los Angeles County Sheriff Alex Villanueva defended his move to dispatch deputies to the neighborhood while asking local leaders to declare a state of emergency to combat the region’s homeless crisis. In a news conference, Villanueva asked the county board of supervisors to issue the declaration as the homeless issue, specifically in Los Angeles’ Venice Beach neighborhood, continues to worsen. With a declaration, the county would be able to apply for funding from the Federal Emergency Management Agency (FEMA).

Homeless outreach teams with the sheriff’s department were dispatched to Venice to address an influx of homeless encampments along the area’s famous boardwalk near the beach. The area is under the jurisdiction of the Los Angeles Police Department.

Videos uploaded daily to social media show homeless people along the beach fighting, harassing passersby and, in some cases, setting fires and committing violent crimes. Residents and business owners have complained of unsanitary conditions and a dangerous environment as encampments continued to expand amid the coronavirus pandemic.

“Do I want to be in Venice? Of course not,” Villanueva said. “Do I have to be there? Yes, because the system, the way it’s set up, and the architects of this failed plan are forcing us to take a different approach.”

In May, Newsom proposed setting set aside roughly $12 billion of a $100 billion pandemic recovery plan to help get homeless people off the street and into public housing.

As the nation’s most populous state, California has the most people – roughly 161,000 – experiencing homelessness. The governor’s $12 billion housing proposal would equate to roughly $74,500 spent on every homeless person in the state.

The proposal includes $8.75 billion over two years to create an estimated 46,000 housing units, expanding on a program the governor launched last year to convert motels and other properties into housing. Nearly half the money would go toward housing in places where people with mental health and other behavioral issues can get services onsite.