WASHINGTON — The acting chief of the Capitol Police formally asked the Defense Department on Thursday to keep thousands of National Guard troops on Capitol Hill beyond their scheduled departure next week as she warned of an increase in threats against lawmakers.

The request came only after Yogananda D. Pittman, the acting chief, appealed to congressional leaders to intervene after the board that oversees her department failed to grant her request to ask for the extension — even as the police alerted the public to another possible assault against lawmakers this week.

That possible plot by an unnamed militia group to target lawmakers at the Capitol on March 4 did not materialize on Thursday. But the disconnect between the Capitol Police chief and the three-member board that oversees the agency underscored the bureaucratic structure and communication breakdowns that have hampered security, including slowing the request for the National Guard to respond to the assault on the complex on Jan. 6.

In a letter sent to House and Senate leaders in both parties, Chief Pittman said she had asked the Capitol Police Board to extend the emergency declaration that prompted the deployment, which began during the assault on the Capitol, beyond March 12, when it is scheduled to expire.

“To date, U.S.C.P. has not received the required authorization to request an extension of National Guard support,” Chief Pittman wrote to the top four leaders of Congress, including Speaker Nancy Pelosi of California and Senator Chuck Schumer of New York, the majority leader.

She then asked them to intervene with the board members — specifically the Senate’s acting sergeant-at-arms — to gain approval to request an extended Guard presence. Chief Pittman said the House’s sergeant-at-arms had approved her request.

“In eight days, the National Guard is scheduled to leave the Capitol complex,” she wrote, and keeping troops would require a formal request authorized by the board. “Therefore, we respectfully request your assistance in obtaining the required authorization.” 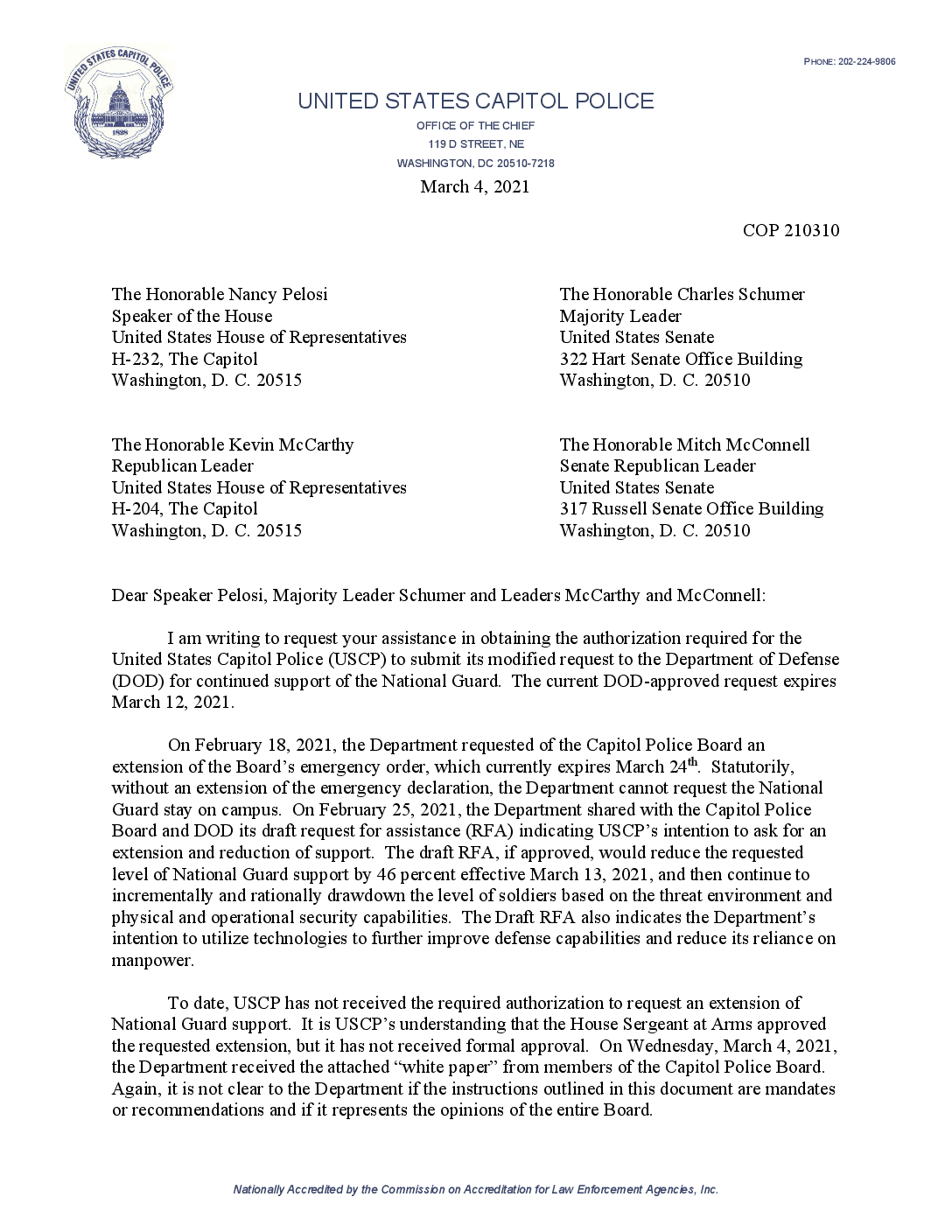 The acting chief of the Capitol Police, Yogananda D. Pittman, sent a letter to congressional leaders on Thursday requesting authorization to ask the Pentagon for continued support from National Guard troops.

Later Thursday, the Capitol Police announced that they had received authorization to formally ask for the Defense Department to extend the Guard’s stay. The police cited a 93 percent increase in threats against lawmakers during the first two months of 2021 compared with the same period last year, and said in a statement that the agency was “extremely grateful for the Department of Defense and the National Guard support provided since Jan. 6.”

A senior Defense Department official acknowledged that the Pentagon had received the request. 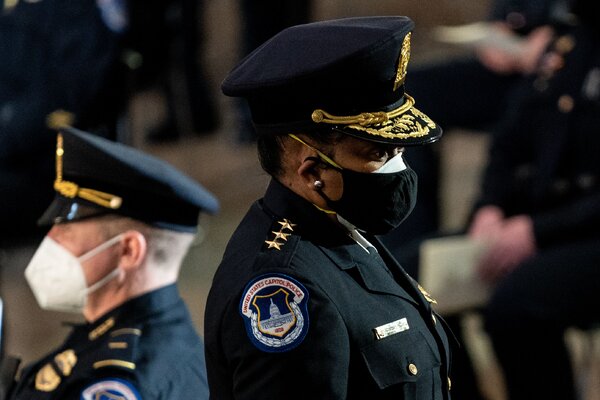 The warning of another potential attack on Thursday from a militia group prompted House leaders to move up a vote on policing legislation from Wednesday night so lawmakers could leave Washington earlier than planned. But the Senate proceeded with its legislative business on Thursday, as Democrats hoped to push President Biden’s $1.9 trillion aid package through the chamber by the weekend.

A bulletin from the F.B.I. and the Department of Homeland Security warned that extremists inspired by the pro-Trump conspiracy theory known as QAnon had discussed plans to target lawmakers on Thursday and take over the Capitol. Some of the theory’s followers appeared to have latched onto March 4 — the original inauguration date set in the Constitution — as the day Donald J. Trump would be restored to the presidency with the help of the military and renew his crusade against the country’s enemies.

The threat prompted the Capitol Police to increase the number of officers at the building, which had been ringed with new fencing, topped with razor wire, after the assault on Jan. 6.

Concern over another attack about two months after the Jan. 6 riot reflected the heightened anxiety about domestic terrorism, which the F.B.I. director, Christopher A. Wray, said Tuesday was “metastasizing across the country.”

The possible extension of the Guard was reported earlier by The Associated Press.

Representative Elissa Slotkin, a Michigan Democrat whose state has supplied some of the troops, said on Thursday that she had heard from her contacts within the Guard that the request was for a 60-day extension.

“I am hearing from contacts at the National Guard that the U.S. Capitol Police have asked for a 60-day extension of the Guard’s mission in and around the Capitol,” Ms. Slotkin said.

She added, “It’s critical that members of Congress get a briefing on what’s behind these decisions.”

Chief Pittman also said on Thursday that the Capitol Police Board was recommending that the department begin removing fencing around parts of the complex starting on Monday, followed by the removal of more fencing by March 12.

Appetite for a prolonged Guard deployment at the Capitol has been losing support among members of Congress. Some Republicans for weeks have called for the fencing around the Capitol to come down.

Senator Amy Klobuchar, Democrat of Minnesota, told reporters that she believed politicians should defer to the police on how long the enhanced security procedures should remain in place. She added that she would like to see the number of troops reduced.

“You’ve got to listen to law enforcement,” she said. “I just think we’ve got to do what’s safe.”

After Jan. 6, the Capitol Police leadership has asked for almost $620 million in total spending, an increase of nearly 21 percent over current levels, to pay for new equipment, training and an additional 212 officers for assignments such as a permanent backup force.