A federal jury is set to begin deliberations Thursday in the Varsity Blues college admissions case, following a nearly four-week criminal trial for two parents accused of committing fraud and bribery to get their children admitted to the University of Southern California as recruited athletes.

Prosecutors and defense lawyers made closing arguments in the U.S. District Court in Boston on Wednesday, in the first trial in a nationwide scandal that highlights the extreme anxiety around admissions to selective U.S. universities.

Prosecutors aimed to persuade jurors that defendants John Wilson and Gamal Abdelaziz, unwilling to settle for an uncertain path for their teens, conspired with a corrupt California college counselor, William "Rick" Singer, who offered a guarantee: In exchange for payments, he would get the teens tagged as recruited athletes, even if they weren’t star players. Several coaches have pleaded guilty to taking bribes from Mr. Singer; two others and a USC administrator are slated for trial in the coming months.

Assistant U.S. Attorney Stephen Frank told jurors Wednesday the defendants knew the money they gave Mr. Singer was to be used as a bribe, whether or not they understood every detail of the plan. Mr. Frank replayed recorded conversations, introduced during the trial, between Mr. Singer and a number of his clients.

He played the audio clips, he said, "So that you the jury would be able to hear these defendants in their own words scheming to trade money for recruitment spots."

Defense attorneys argued that Mr. Singer conned their clients, created the athletic profiles behind their backs and that the businessmen believed they were making lawful donations via Mr. Singer’s foundation.

Mr. Wilson acted in good faith and thought he was dealing with a trusted college adviser, said his lawyer, Michael Kendall.

Forty-seven defendants have pleaded guilty or agreed to do so in Varsity Blues, which emerged in 2019. Mr. Singer has admitted to conspiring with parents and others to fix SAT and ACT scores and to bribe coaches at schools including USC, Stanford, Georgetown, and Yale universities to sneak applicants in through athletics.

Eight others, including Messrs. Abdelaziz and Wilson, have maintained their innocence. 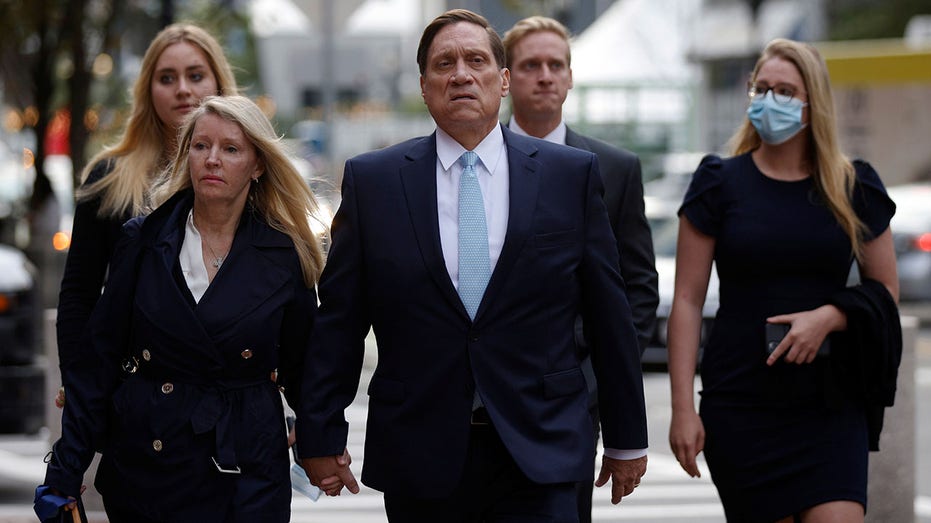 Private equity firm founder John Wilson (C), who is charged with participating in a scheme to pay bribes to fraudulently secure the admission of his children to top schools, arrives at federal court where closing arguments are scheduled in the first (Reuters Photos)

Prosecutors said Mr. Abdelaziz paid $300,000 and conspired with Mr. Singer in 2017 to get Mr. Abdelaziz’s daughter, Sabrina, into USC as a basketball recruit, though she didn’t make her high-school varsity team. She went to USC but didn’t play.

They accused Mr. Wilson of paying a total of more than $1.5 million to work with Mr. Singer to get his son, Johnny, flagged as a USC water polo recruit and again years later to help his twin daughters land spots as sailors elsewhere. Johnny Wilson got into USC and quit the water polo team after his first semester. The alleged scheme was uncovered before the twins finished high school.

During the trial, an FBI agent testified that falsified athletic profiles were found in email accounts the defendants used. Both defense lawyers insisted their clients never saw the emails.

In his rebuttal at the end of closing arguments, Mr. Frank told the jury that it wasn’t plausible. "These two men on opposite sides of the world. They both missed the exact same email," he said. "Think about the chances."

Among calls prosecutors replayed Wednesday was one from October 2018 in which Mr. Singer, by then a government cooperator, told Mr. Abdelaziz that Mr. Singer’s foundation was being audited. Mr. Singer used that cover story to get a number of parents talking on the recorded line.

"I’m not going to tell the IRS anything about the fact that your $300,000 was paid to Donna Heinel at USC to get Sabrina into school even though she wasn’t a legitimate basketball player at that level," Mr. Singer said. "You’re ok with that, right?" (Ms. Heinel has pleaded not guilty to participating in Mr. Singer’s scheme.)

"Of course," Mr. Abdelaziz responded on the call.

Attorneys for both men focused during the trial on Mr. Singer’s mixing of words like "donation" and "payments" in his communication with parents.

Mr. Kendall called witnesses who said Johnny Wilson practiced with the USC team, an effort to rebut testimony to the contrary by a USC assistant water polo coach.