COVID-19: The PM is confident in ‘plan A’, but this time Boris Johnson knows better than to make firm promises

One thing the prime minister and his scientific advisers clearly agree upon is that when it comes to this winter, nothing should be ruled out.

Boris Johnson made a point of explaining the “toolbox” of measures available were varied, and outlined the coronavirus restrictions that could be reintroduced if a “plan B” were needed.

This is perhaps a prime minister who has learned the lessons of last winter and all those COVID-19 U-turns: promises are made to be broken, and plans can always change, but sometimes it’s better not to make them. 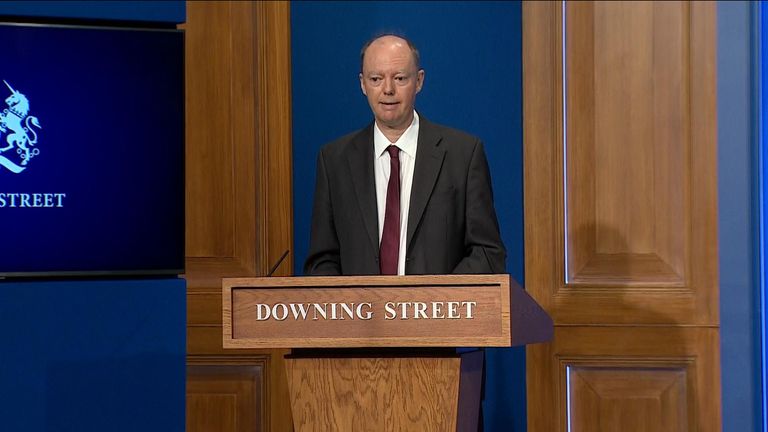 The prime minister was certainly hedging his bets.

But even in a more circumspect mode, the prime minister expressed confidence: that “plan B” could be avoided, and that wider lockdowns could be avoided too – so long as the number of people getting double-jabbed continues to go up.

The chief scientific adviser and chief medical officer backed Mr Johnson on the pressing importance of vaccinations, but when it came to his confidence on the ability to avoid reimposing restrictions there was no ringing endorsement.

Instead, Professor Chris Whitty warned against being presumptuous, saying we have not faced a winter with the Delta variant before and those who say they know how it could pan out have not understood the situation.

There was also what appeared to be a veiled warning from Sir Patrick Vallance. Was that reference to what happened last autumn, when the government chose not to follow the advice of scientific advisers to opt for a two-week “circuit breaker” as a response to a spike in cases?

What followed was waves of regional lockdowns, Christmas restrictions and three months of national lockdown in the new year.

The three men may have stood at the podium side by side, but as we’ve seen before in this pandemic, there appear to be gaps between what Mr Johnson hopes will happen, and what the scientists think will happen.

The difference this time is that the prime minister has given himself more room to manoeuvre.