She has been trailing her Republican rival, Gov. Brian Kemp, alarming Democrats who have celebrated her as the master strategist behind the state’s Democratic shift. 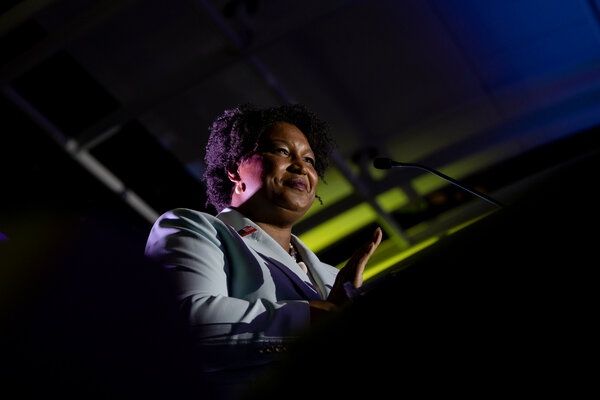 NEWNAN, Ga. — Georgia Democrats have grown increasingly pessimistic about Stacey Abrams’s chances of ousting Gov. Brian Kemp from office, pointing to her struggles to rally key parts of her party’s coalition and her inability to appeal to a slice of moderate Republican voters who can decide the state’s elections.

Public and private polls have consistently shown her trailing Mr. Kemp, a Republican seeking a second term. And, in a particularly worrying sign for Ms. Abrams, polls also show she is drawing less support than the other high-profile Democrat on the ballot, Senator Raphael Warnock, who is seeking a first full term.

The gap between the two Democrats, which is within the margin of error in some recent surveys and as wide as 10 points in others, highlights the extent of her struggles. Though she is beloved by Democratic voters, she has lost some ground with Black men, who provided crucial backing in her narrow loss to Mr. Kemp in 2018. And while Mr. Warnock draws some support from Republican moderates, Ms. Abrams — who has been vilified more by the G.O.P. than any other statewide figure — has shown little sign of peeling off significant numbers of disaffected Republicans.

Ms. Abrams’s standing — consistently trailing Mr. Kemp in polls by around five percentage points — has alarmed Democrats who have celebrated her as the master strategist behind Georgia’s Democratic shift.

For years, she worked to register and turn out Democratic voters, narrowly losing her first bid for governor in 2018 and helping fuel President Biden’s victory in 2020. Now, her struggles have some Georgia Democrats wondering if the Abrams model — seeking to expand the universe of voters to fit her politics — is truly better than trying to capture 50 percent of the voters who exist now.

“Right now, people are concerned — kind of looking sideways,” said Erick Allen, a Democratic state representative, who said he hoped enthusiasm would pick up in the fall sprint. “There’s a lot of energy around the Warnock campaign. I’m not sure if the same energy that we had four years ago is around the Abrams campaign yet.”

In an interview last week, Ms. Abrams defended her strategy, noting that her Democratic turnout operation helped carry the state for Mr. Biden, Mr. Warnock and Senator Jon Ossoff in the 2020 election cycle. “I imagine an electorate that is possible, not the electorate as if the election was held today,” she said.

She and her top aides believe her standing is improving, buoyed by voter anger over the Supreme Court decision overturning the federal right to an abortion. She is planning a broader campaign to highlight Mr. Kemp’s signing of a 2019 law — which went into effect in July — that bans abortion in Georgia after the sixth week of pregnancy.

Ms. Abrams’s allies said the comparisons between her and Mr. Warnock overlooked stark differences. Ms. Abrams is a Black woman contending with sexist stereotypes about leadership, they note. She is also running against an incumbent governor with a well-built political apparatus, while Mr. Warnock’s rival, the former football star Herschel Walker, is a political novice. (Both Mr. Kemp and Mr. Walker’s campaigns declined to comment.)

“We have to work harder as women, as African American women,” said former Mayor Shirley Franklin of Atlanta, who added that women “just have a harder time capturing the imagination as executives.”

The Abrams and Warnock campaigns have pursued different strategies. Mr. Warnock is betting on winning over just enough moderate, white Republican voters to get himself past Mr. Walker. Ms. Abrams needs a big turnout from base Democrats and new voters to oust Mr. Kemp.

Last week, Mr. Warnock demurred when asked by The New York Times during a news conference if he would campaign with Ms. Abrams, delivering the sort of practiced non-answer Democrats have been reciting when asked if they would welcome help from an unpopular President Biden.

The next morning, Ms. Abrams announced she would join Mr. Warnock for a campaign stop that very afternoon.

“We need Stacey Abrams,” Mr. Warnock told supporters at the event, calling her “a visionary leader” and “my dear friend.”

Democrats have largely kept quiet on their concerns about Ms. Abrams’s campaign. But several county elected officials and community leaders in Georgia have privately expressed their worries to the campaign directly, according to interviews with more than two dozen Democratic officials who asked not to be named discussing private conversations. They have complained that the campaign was slow to reach out to key constituencies and underestimated Mr. Kemp’s strength in an already difficult year for Democratic candidates.

Ms. Abrams has in recent weeks focused attention on winning support from Black men, voters who have inched toward Republicans during the Trump era.