WASHINGTON – Three Democratic lawmakers are pressing Supreme Court Justice Amy Coney Barrett to recuse herself from one of the court’s highest profile cases this term because of her ties to the conservative nonprofit that filed the appeal.

A foundation associated with Americans for Prosperity, which acknowledged spending “seven figures” on advertising to support Barrett during her confirmation battle last fall, has brought a case that will be argued at the nation’s highest court next week challenging a requirement that it disclose major donors to state regulators in California.

“Statute, constitutional case law, and common sense all would seem to require your recusal,” wrote Sens. Sheldon Whitehouse, D-R.I., and Richard Blumenthal, D-Conn., both members of the Senate Judiciary Committee, along with Rep. Hank Johnson, D-Ga., a member of the House Judiciary Committee. “At a minimum, there should be a public explanation as to why you think recusal is not required under federal law.”

Barrett did not immediately respond to a request for comment.

Whitehouse, a leading voice on transparency at the Supreme Court, questioned Barrett about the case and whether she would recuse during her confirmation hearing in October. In a written response, Barrett said then it would be inappropriate to opine on “hypotheticals” and that such questions could be answered only “through the judicial process.” The justices agreed to take the appeal in January, and arguments are set for Monday.

“Because the Supreme Court has since granted the case, these questions are no longer abstract or hypothetical, so we renew the request,” the Democrats wrote. 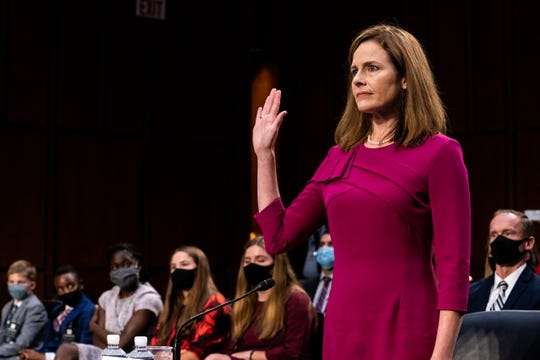 On the same day that President Donald Trump named Barrett to the court, AFP promised to commit “the full weight” of its organization to support her confirmation, including with an advertising campaign. Though the group did not disclose the amount of money it would spend, it told The Hill newspaper it would be “in the seven figures.”

The Americans for Prosperity Foundation appeal has drawn huge interest from nonprofit groups and campaign finance experts across the country. The group contends that disclosing its largest donors to California regulators would cast “a nationwide chill” on First Amendment freedoms of association and speech and that donors to the group must be kept confidential because they have faced “threats, harassment, and violence.”

California counters that the Internal Revenue Service already requires groups to provide the information and that the state needs the same data to investigate potential fraud.

A federal district court sided with the nonprofit groups, finding that the state could achieve its goals or regulation through less invasive means. The California-based U.S. Court of Appeals for the 9th Circuit reversed the decision, finding that the state’s disclosure requirement “serves an important governmental interest.”

The Supreme Court is expected to decide the dispute this summer.

The Americans for Prosperity Foundation is a 501(c)(3) charity that “educates the public about free-market solutions,” according to its petition at the Supreme Court. Attorneys for the group described Americans for Prosperity as its “sister organization,” a 501(c)(4) that is “focused on policy and legislative change.” Charles and David Koch have been “closely associated with these organizations,” according to the petition.

The lawmakers’ letter comes at a time when some on the left are pushing for structural changes at the Supreme Court. Growing the size of the nine-member bench has drawn the most attention – and criticism – but several advocates are also seeking changes such as a formal recusal process for justices. The idea has won bipartisan support in the past, though it has been opposed by Chief Justice John Roberts and others. 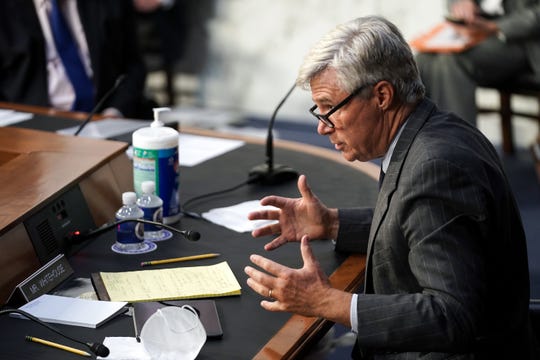 Fix the Court, a nonpartisan group seeking term limits for justices and greater transparency, has documented cases in which several of the justices ruled despite “credible conflicts of interest.” The group has pressed the court to publicize the reason for a recusal in the rare instances when a justice does back away from a case.

Justices sometimes recuse themselves because they were involved in pending litigation before it reached the Supreme Court. In other cases, a justice may own stock in a company before the court or have other financial or personal ties.

President Joe Biden created a 36-member commission earlier this month that is tasked with studying potential structural changes to the Supreme Court.