WASHINGTON – The Department of Homeland Security’s internal watchdog rejected a proposal to investigate the Secret Service’s use of force against racial justice protesters in Lafayette Square in Washington last summer, according to internal records reviewed by USA TODAY.

Such a probe would have looked into the Secret Service’s role in forcing protesters out of Lafayette Square near St. John’s Episcopal Church, just before former President Donald Trump stood in front of the historic church for a photo op.

The forceful removal of demonstrators on June 1 and the photo op that followed have become a defining moment in Trump’s response to the monthslong racial justice protests over the death of George Floyd.

Internal records obtained by the nonprofit Project on Government Oversight and shared with USA TODAY show attorneys in the office of DHS Inspector General Joseph Cuffari had drafted a proposal to investigate whether the Secret Service exercised appropriate use of force during protests between May 20 and June 7 in Washington. More than 60 people were injured, according to the records, which noted the use of chemical irritants and rubber bullets.

The proposal was submitted on June 10 and rejected about a week later, according to the records. 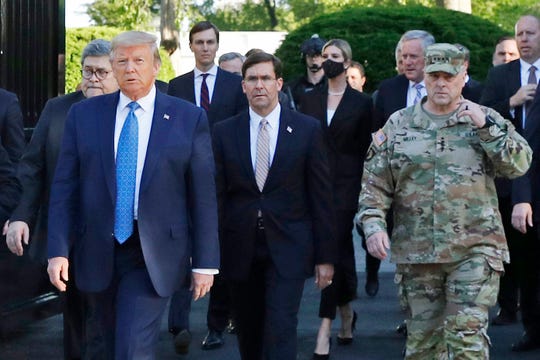 President Donald Trump departs the White House to visit outside St. John's Church, in Washington on June 1, 2020. Part of the church was set on fire during protests on Sunday night. Walking behind Trump from left are, Attorney General William Barr, Secretary of Defense Mark Esper and Gen. Mark Milley, chairman of the Joint Chiefs of Staff. Milley says his presence “created a perception of the military involved in domestic politics.” He called it “a mistake” that he has learned from. (Photo: Patrick Semansky, AP)

Cuffari’s office also did not pursue an investigation into what actions the Secret Service took to keep COVID-19 from spreading among its ranks and among government officials the agency protects, including the president.

Department attorneys proposed an investigation into the Secret Service’s COVID-19 response on Aug. 10, records show. Three days later, staffers were instructed to narrow the scope of the proposal. No such investigation has been started.

Trump tested positive for coronavirus in October. By November, more than 100 Secret Service officers had either tested positive or been told to quarantine. Around this time, the Secret Service was providing security at a series of campaign rallies hosted by Trump and lower-profile events for then-President-elect Joe Biden.

Cuffari’s office did not respond to requests for comment from USA TODAY. A spokesperson acknowledged in statements to the Project on Government Oversight and The Washington Post that the agency declined the proposals, citing limited resources.

“We have to make tough strategic decisions about how to best use our resources for greatest impact across the Department. In both of these cases, we determined that resources would have a higher impact elsewhere,” the spokesperson told the Project on Government Oversight, adding that political sensitivity is not a reason to launch an investigation nor to decline to do so.

The Trump administration’s use of federal resources against protesters drew criticism from lawmakers and state and local officials. Some accused Trump of abusing his power by using paramilitary forces against civilians. 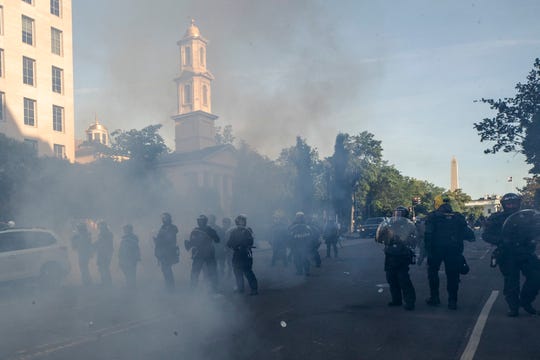 Police move demonstrators away from St. John's Church across Lafayette Square near the White House on June 1 in Washington. (Photo: Alex Brandon, AP)

Trump, who had just spoken in the White House Rose Garden about the George Floyd protests, then walked across the cleared park and toward St. John’s Episcopal Church along with top administration officials.

Law enforcement officials said the protesters were violent and combative. But multiple journalists on the scene, including USA TODAY reporters, said protesters were peaceful before police moved in.

A senior Justice Department official told USA TODAY last summer that then-Attorney General William Barr ordered protesters to be cleared from the park on June 1. The official, who was not authorized to comment publicly, said the decision to expand the security perimeter around Lafayette Square was made that morning, after previous protests scorched the area – and before it was known that Trump would walk to historic church later that evening.

The Justice Department’s inspector general already has an ongoing investigation into federal law enforcement officers’ use of force against protesters in Portland, Oregon, and Washington, D.C. The inquiry is in coordination with Cuffari’s office.