EU leaders picked Germany’s defence minister Ursula von der Leyen to take over from Mr Juncker after three days of messy talks to allocate the bloc’s top jobs. But according to a new ARD Deutschlandtrend survey, 56 percent of those polled do not agree that Ms von der Leyen would be a good European Commission president, while just 33 percent back her.

Ms von der Leyen is a close ally of German Chancellor Angela Merkel and a member of her Christian Democratic Union (CDU) party.

She was announced on Tuesday as the candidate to replace Mr Juncker but the appointment must be approved by the European Parliament.

He said: “I believe that Ursula von der Leyen can become a good commission president – but I do not know whether she will be elected.” 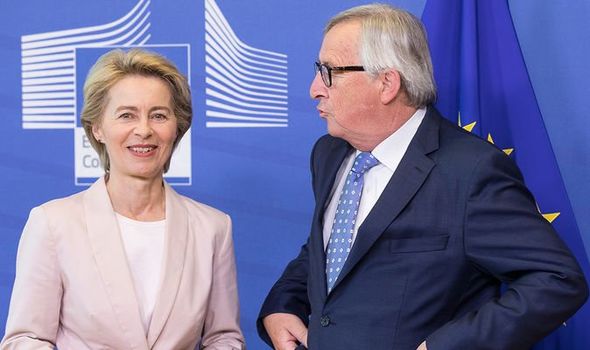 The leaders from the EU’s 28 member states struggled to reach an agreement over who to put forward for the five roles.

And Italian politician David-Maria Sassoli was selected as the new president of the European Parliament.

But the EU has faced criticism that the nominations went on behind closed doors and that the Spitzenkandidaten process – where European political parties appoint lead candidates – was ignored.

Mr Juncker today admitted that the appointment of his successor was “not very transparent”.