Former WWE wrestler Dan Rodimer calls his former gig one of the “dirtiest jobs in the world.”

Now, as a candidate for a U.S. House seat in Texas, Rodimer says he’s ready to take on another dirty job – in Washington, grappling with what he calls “the commies in D.C.”

Rodimer makes his case to voters in a rodeo-themed campaign ad. It shows him attempting to ride an ornery bull that a spectator refers to as “Nancy Pelosi – the beast!”

“Texas has big problems,” Rodimer says after riding the bull. “We need a big fighter to solve those problems.

“The commies in D.C. are ruining America,” he continues. ” … I know how to handle Nancy Pelosi and stop her bulls—. And I’ll put a boot right in her socialist platform,” he adds, then hears a squishing noise below him.

“Well, it looks like I already did,” he says.

Rodimer then lists the issues that he believes Texas voters are most concerned about. He says they include trying to stop efforts to allow men in women’s bathrooms and boys in girl’s sports, and prevent higher taxes, higher gas prices, unprotected borders and attempts to take away guns. 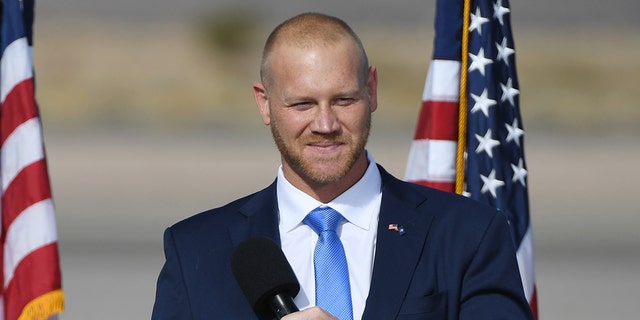 “We must stop them,” he says later. “Hire me to represent you and I’ll go to D.C. and kick some left-wing a–.”

Rodimer, who competed in the WWE from 2004 to 2007, is running in the May 1 special election in the 6th Congressional District, located south of the Dallas-Fort Worth area.

It’s a wide-open race, with at least 11 Republicans and 10 Democrats declared as candidates, and at least two smaller-party candidates competing as well.

All candidates will appear on the same ballot, with the top two candidates advancing to a May 24 runoff if no candidate attracts more than 50 percent of the vote.

In 2020, Rodimer was living in Nevada, where he received an endorsement from then-President Donald Trump for Nevada’s 3rd Congressional District seat, but moved on to Texas with his wife Sarah and their children after losing to Nevada Democratic incumbent Rep. Susie Lee.

The candidate, who appears in cowboy attire in his ad, has roamed around a bit, having been born in New Jersey and attended college and law school in Florida.