EXCLUSIVE: Georgia filed a lawsuit against the Justice Department Wednesday in an effort to “compel compliance” with its request for records and communications about the state’s new election law between the DOJ and left-leaning activist groups and lawmakers, saying its failure to respond deprives the public of information needed to determine whether it is “colluding or conspiring with outside entities to carry out a political agenda.”

The suit, which was filed in U.S. District Court for the District of Columbia, stresses the importance of DOJ records “to answer a question of national significance.”

“To what extent did DOJ coordinate with outside entities when it decided to bring a lawsuit against Georgia, but not other states with similar voting laws, under Section 2 of the Voting Rights Act?” the lawsuit states. “The answer to that question will help clarify the extent to which DOJ is pursuing a transparent political agenda in its lawsuit against Georgia.”

In August, Georgia submitted a FOIA request to the Justice Department, requesting all communications discussing SB 202—the state’s new election law—since Nov. 3, 2020, between DOJ officials and a list of nearly 5 dozen entities and individuals, including Stacey Abrams, her organization Fair Fight, Southern Poverty Law Center and the ACLU. 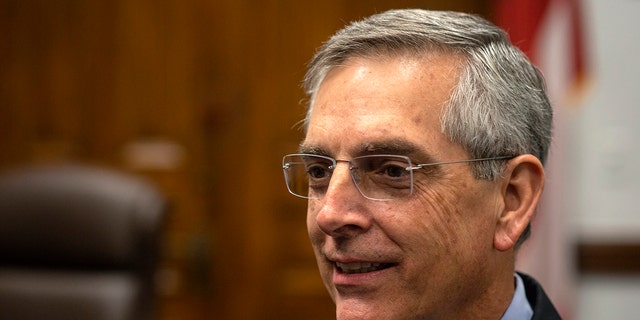 The FOIA also requested communications between DOJ officials and members of Congress or their staff related to the state’s election law, as well as “all internal guidance documents” that the Justice Department used to determine when a provision of a state’s election law violates the Voting Rights Act.

“By failing to respond to the request, DOJ is depriving Plaintiffs and the public of vital information needed to determine whether the Government is colluding or conspiring with outside entities to carry out a political agenda,” the lawsuit states.

Raffensperger, in an exclusive interview with Fox News, said the state “does not know why the Biden administration is stonewalling” on their request for communications.

“But we think the people deserve to know who is pulling the strings behind their politicized lawsuit,” Raffensperger told Fox News, noting that the state has been “more than fair and patient.”

“It has been over 90 calendar days since our request and they were supposed to have something back to us within 20 days,” he said.

“We want to know what type of contacts they’ve had with Stacey Abrams and other organizations, and who is pulling the strings–who is pushing this politicized lawsuit,” Raffensperger said.

The lawsuit comes amid the Justice Department’s federal suit against the state of Georgia, alleging that SB 202 violates the Voting Rights Act. 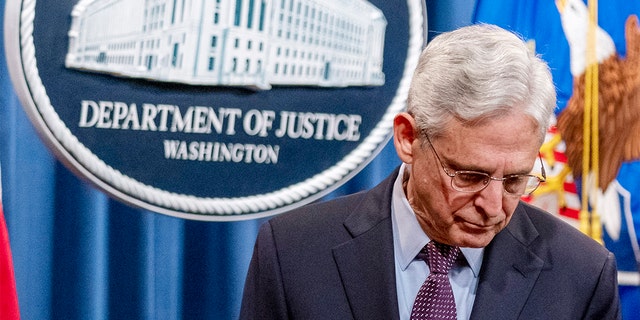 Attorney General Merrick Garland steps away from the podium after speaking at a news conference at the Justice Department in Washington, Monday, Nov. 8, 2021.
(AP Photo/Andrew Harnik)

Georgia’s new law requires voter ID for absentee voting rather than relying on signature matching for verification; limits ballot drop boxes to one per county or one per 100,000 voters; and expands early voting days and standardized early voting hours to a minimum of 9 a.m. to 5 p.m. and a maximum of 7 a.m. to 7 p.m. The legislation also barred outside groups from passing out food and water to those in line, which Republicans say can be used as a method to illegally influence people waiting to vote.

The law also handed more election authority to the GOP-controlled state legislature. It states that the General Assembly is to select the chair of the state elections board, rather than the board being chaired by the Georgia secretary of state. It also shortens runoffs from nine weeks to four.

The provisions the DOJ are targeting include a ban on government entities handing out unsolicited absentee ballots; fines on civic groups, places of worship and advocacy organizations for distributing follow-up absentee ballots; and shortening absentee ballot deadlines to 11 days before Election Day. 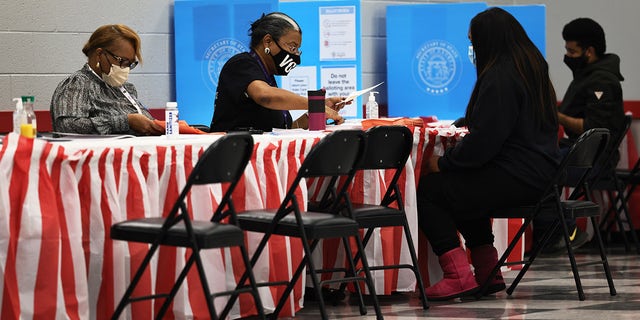 People check in as they prepare to cast their vote in the Georgia runoff election at C.T. Martin Natatorium and Recreation Center on Jan. 5, 2021 in Atlanta.
(Michael M. Santiago/Getty Images)

In the latest lawsuit, Georgia defended the election law as “reasonable, non-discriminatory, and well within the mainstream of election laws across the country.”

The state says the law “streamlines the voting process by requiring absentee voters to request a ballot in advance of the election and to include a Georgia driver’s license or identification card number or other identification, which provides for an objective criteria to verify the identity of the voter.”

The state also argues the law “streamlines the process by requiring voters to vote in their correct precincts,” and ensures that voters are able to vote “without outside pressure, prohibiting anyone from approaching voters in line with something of value.” The law also ensures “for the first time” that drop boxes are “statutorily required” in every county.

“Yet, DOJ has not filed any Voting Rights Act lawsuits against the other states with similar election laws, raising the likelihood that DOJ’s lawsuit is a nakedly political action,” the suit states.

“We’ve been singled out and we want to know why,” he said. “I think the American people don’t like to see the Justice Department weaponized and politicized against a particular state.”

The Justice Department did not immediately respond to Fox News’ request for comment.