He looted Speaker Pelosi’s office, but says he paid for his trophy.

Throughout the late afternoon, rioters repeatedly emerged from the Capitol bearing trophies that they had stolen. A few carried “Area Closed” signs that they had grabbed and then stormed past. But it was anything taken from Speaker Nancy Pelosi’s office that was especially popular with the crowd.

One person emerged holding up a piece of a wooden plaque that marked the entrance to Ms. Pelosi’s office, which someone appeared to have torn off a wall. The rioter held it up like a trophy, as hundreds of people on the steps below cheered wildly. “Not our speaker!” shouted one woman. “Get her out!” shouted another man.

Richard Bigo Barnett, 60, from Gravette, Ark., stood outside the Capitol, his shirt ripped open and his chest bared to the cold, loudly bragging about how he had broken into the speaker’s office.

“I wrote her a nasty note, put my feet up on her desk,” said Mr. Barnett, who goes by the nickname Bigo. He was brandishing an envelope with the speaker’s letterhead that he had taken from Ms. Pelosi’s office. He insisted he had not stolen it — “I put a quarter on her desk.” 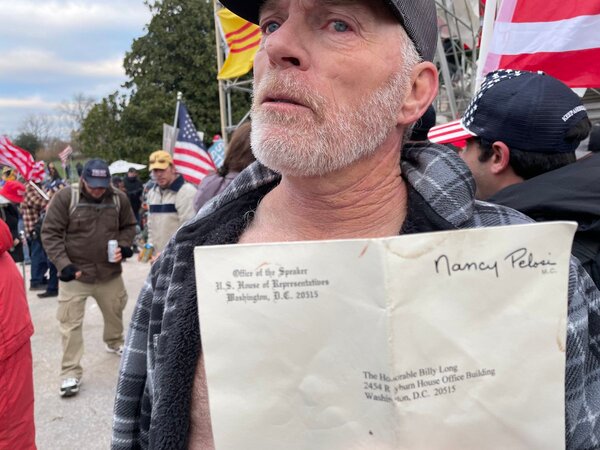 Mr. Barnett continued: When the police came in with pepper spray, “I said, ‘I paid for this, it’s mine, and I left.’” His face was puffy from being hit with pepper spray, but he was laughing as he entertained fellow protesters with his tale.

His account was backed up by a picture later posted on social media that showed Mr. Barnett sitting at Ms. Pelosi’s desk with his feet up, just as he had described.

Mr. Barnett insisted that he had just been knocking on the door when he was pushed in by the crowd. It was a story he knew no one would buy. “I’ll probably be telling them this is what happened all the way to the D.C. jail,” Mr. Barnett said.