How Did Allison Highwolf Die? Distrust Fuels a Mystery in Indian Country.

When a Northern Cheyenne family questioned their daughter’s untimely death, official indifference deepened their pain — and their suspicions. 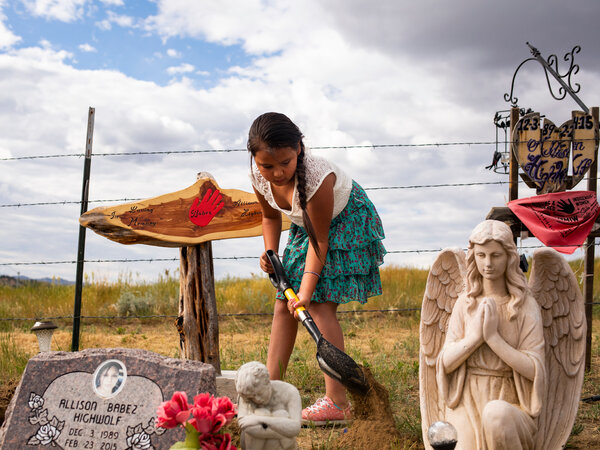 NORTHERN CHEYENNE RESERVATION, Mont. — The knock on the door came at 3 a.m., when Pauline Highwolf opened it to see a police officer from the Bureau of Indian Affairs. “Don’t tell me,” she said, backing away.

The body of her 26-year-old daughter, Allison Highwolf, had been found alone in a motel room in Hardin, the officer said. It was February 2015, and Ms. Highwolf, who had been living in the motel with her boyfriend, had died of smoke inhalation from a fire of unclear origin.

The state medical examiner’s report said the manner of her death was undetermined, but suggested suicide. Ms. Highwolf’s family suspected foul play, given the strange circumstances. Ms. Highwolf had struggled with alcohol, her family members acknowledged, but she was a mother of four and they did not believe that she would take her own life.

The boyfriend told police he had returned to the motel that night to find the room filled with smoke and Ms. Highwolf’s body blocking the door.

Six years later, the circumstances of Ms. Highwolf’s death remain a mystery, one of many involving Native women who disappear or meet violent ends with alarming regularity. Her family and the local authorities agree that the case was shoddily handled and the initial investigation haphazard, as is often the case for Native Americans.

“They put her in the category of ‘just another drunken Indian,’” said one of Ms. Highwolf’s sisters, Rhea New Holy. “But she wasn’t.”

Today, under pressure from her family and an advocacy group in California, Ms. Highwolf’s case is under review. Pauline Highwolf is relieved it has been reopened, but she says a six-year effort to get there underscores the need for change in the way such cases are handled.

In Montana, Native Americans, mostly young women, accounted for one-third of the 110 active missing persons cases in the missing persons’ clearinghouse at the end of 2019, according to a 2020 study by the state’s Justice Department. Big Horn County, where Ms. Highwolf’s body was found, and neighboring Rosebud County, home of the Northern Cheyenne reservation, lead the state for the number of missing people reported per capita. Last year, in the same town where Ms. Highwolf died, the body of Kaysera Stops Pretty Places, 18, who had been missing, was found in a backyard. Her case remains open.

Underreporting and poor record-keeping obscure the dimensions of the problem, but data that does exist suggests the risk of rape or sexual assault is 2.5 times higher for Native women, and murder is their third leading cause of death, according to the Urban Indian Health Institute.