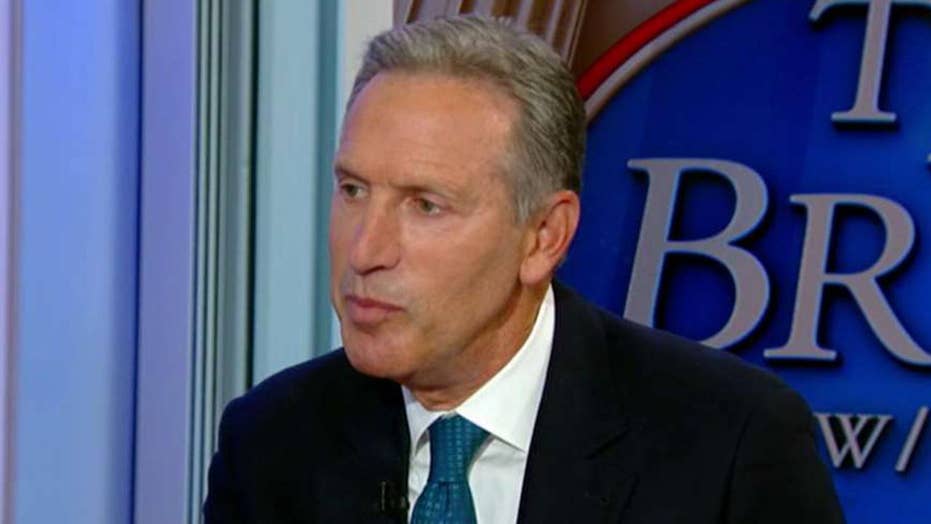 Howard Schultz says he still has the ‘scars, shame and vulnerability’ of being a poor kid

TEMPE, AZ — Howard Schultz just can’t shake The Question. Once again Wednesday, he had to explain that he does not want to be a spoiler who gives President Trump a second term.

“You are not going to win as an independent,” a woman told Schultz during the question and answer portion of his event at Arizona State University in Tempe. “But what you’re going to do is you’re gonna have us have another four years of President Trump.”

"No one in America— trust me— wants to see him removed from office and not re-elected more than me,” Schultz assured his questioner. "I can promise you, I’m not gonna do anything to be a so-called spoiler in all of this."

Schultz said he will not run as a Democrat because the party has moved too far to the left. The former Starbucks CEO appeared frustrated when asked how he would prove he’s “not just another billionaire running.”

“It’s an interesting phenomenon in the last week or so where I have this moniker now of being, ya know, I’m a billionaire, so don’t trust him because he’s a successful person,” Schultz said. “I have succeeded in America. I always thought that was something to be celebrated…I can’t find the answers why people are all the sudden chastising me for being successful.”

Aside from the American flag hanging in the background, this event felt more like a talk show then the precursor to a possible presidential campaign. While Schultz offered a broad vision for the nation, he provided no specifics on policy and told the crowd, “All I’m trying to do is ask the question, ‘What kind of country do we want to live in and aren’t we better than this?’”

But Schultz did keep President Trump in his sights throughout the evening, attacking “the exhaustiveness of these tweets and the lack of truth.”

Taking aim at the tax law signed by Trump, he criticized the lowering of the corporate tax rate. Comprehensive tax reform is needed, he said, “in which the people who need it most are given relief.”

“I don’t have a specific answer of how to solve the problem,” he added.

In a press gaggle afterward, he told reporters: “I’m only four or five days into this…there will be plenty of time for the American people to hear specifics about my policies.”

The roughly 500 audience members gave Schultz a warm reception. And the woman who challenged him on being a spoiler offered a stark contrast to the heckler in New York earlier this week.

“I just wanna commend your company for the Frappuccinos,” she said before telling Schultz he had no chance as an independent. “They’re great.”

“Thank you for the compliment on Frappuccino,” Shultz said. “Appreciate that.”