U.S. officials said the two days of discussions would continue, but accused the Chinese delegation of violating the format for meetings that had sought to find common ground between the superpowers. 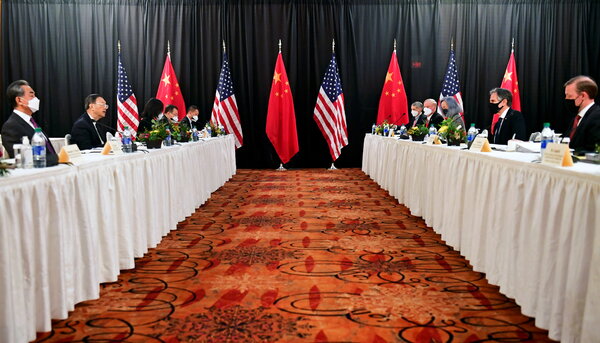 ANCHORAGE — Even before the Biden administration’s first face-to-face meeting with senior Chinese diplomats on Thursday, American officials predicted the discussions would not go well. They were right: The traditional few minutes of opening greetings and remarks dissolved into more than an hour of very public verbal jousting, confirming the expected confrontational tone between the geopolitical rivals.

U.S. officials said the two days of talks would continue, but immediately accused the Chinese delegation of violating the format for the sensitive discussions that had sought to find some common ground amid the many conflict points between them.

Yang Jiechi, China’s top diplomat, accused the United States of taking a “condescending” approach to the talks and said the American delegation had no right to accuse Beijing of human rights abuses or give lectures on the merits of democracy.

At one point, he said the United States would do well to repair its own “deep seated” problems, specifically pointing to the Black Lives Matter movement against American racism. At another, after it looked as if the opening remarks had concluded and journalists were initially told to leave the room to let the deeper discussions begin, Mr. Yang accused the United States of being inconsistent in its championing of a free press.

“I don’t think the overwhelming majority of countries in the world would recognize the universal values advocated by the United States, or that the opinions of the United States could represent international public opinion,” Mr. Yang said through an interpreter. “And those countries would not recognize that the rules made by a small number of people would serve as the basis for the international order.”

Secretary of State Antony J. Blinken appeared taken aback but adopted a more resolute tone. He had opened the talks with an anodyne recitation of issues that would be broached over the three rounds of discussion over two days — from cooperation on climate change and controlling the pandemic to American concerns about Chinese trade policy and military aggressions. Mr. Blinken also said China’s human rights abuses “threaten the rules-based order that maintains global stability.”