At the end of a gathering of the finance ministers of the Group of 20 nations, the U.S. Treasury secretary called for an acceleration of vaccine distribution worldwide. 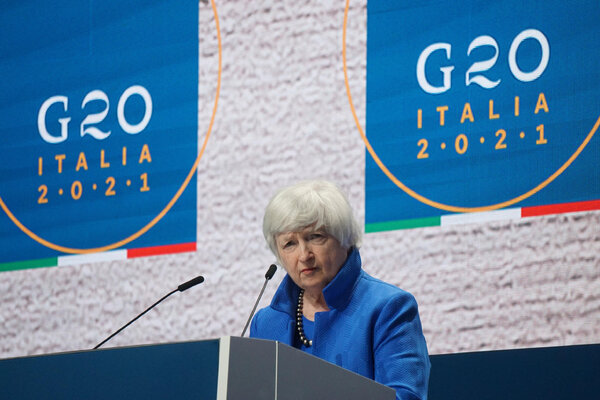 VENICE — Treasury Secretary Janet L. Yellen said on Sunday that she was concerned that coronavirus variants could derail the global economic recovery and called for an urgent push to deploy vaccines more rapidly around the world.

Her comments, made at the conclusion of a gathering of the finance ministers of the Group of 20 nations, came as the highly contagious Delta variant of the coronavirus was driving outbreaks among unvaccinated populations in countries such as Australia, Indonesia, Malaysia and Portugal. Delta is also now the dominant variant in the United States.

“We are very concerned about the Delta variant and other variants that could emerge and threaten recovery,” Ms. Yellen said. “We are a connected global economy. What happens in any part of the world affects all other countries.”

Many cities and countries have started to declare victory against the pandemic, easing restrictions and returning to normal life. But Ms. Yellen warned that the public health crisis was not over.

She said that the world’s top economic officials had spent much of the weekend in Venice discussing how they could improve vaccine distribution, with the goal of getting 70 percent of the world inoculated by next year. Ms. Yellen noted that many countries had been successful in financing the purchase of vaccines, but that the logistics of getting them into people’s arms were falling short.