Biden, Boris Johnson appear to hit it off at G-7 summit

First lady Jill Biden will meet with Duchess of Cambridge Kate Middleton for the first time on Friday during her husband’s first trip abroad as president.

The two women will join an early childhood education roundtable and tour a preschool in Cornwall in southwest England where President Biden will participate in the G-7 this weekend, the Office of the First Lady confirmed, according to The Hill.

The first lady is a community college educator and Kate Middleton has focused many of her royal efforts on children’s issues. The pair are also expected to discuss women’s empowerment during their visit, The Daily Mail reported.

Kate and Prince William will also for the first time attend a Friday evening reception held by Queen Elizabeth II and Prince Charles at the G-7 for world leaders and their spouses, according to The Mail. 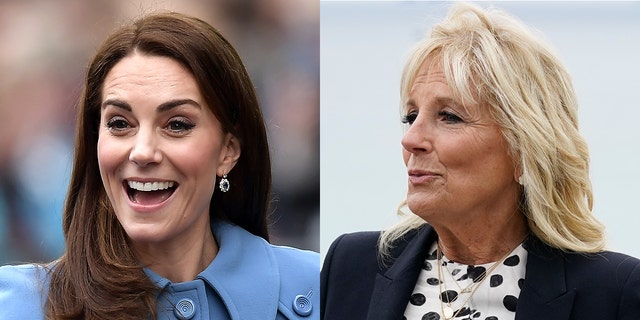 Kate Middleton, the Duchess of Cambridge and first lady Jill Biden will meet for the first time in Cornwall Friday.
(Getty/AP)

The president and first lady met with Prime Minister Boris Johnson and his wife Carrie Johnson in Cornwall Thursday. The two women spent some time on the beach with the prime minister’s 13-month-old son Wilfred.

“No one has more strength and grit and resilience than our military families, but you can’t do this alone,” she said. “We have to help you carry this weight by approving access to mental health resources, ensuring everyone can put food on the table, and supporting caregiving families and survivors.”

She also plans to speak about her Joining Forces initiative for military families during the trip, The Hill Reported.

The Bidens will meet with the queen on Sunday. On Thursday, the couple both expressed their condolences on Prince Phillip’s posthumous birthday Thursday. The queen’s husband died at 99 years old on April 9.

“We are holding the entire Royal Family in our hearts today, and wishing them peace and comfort on what would have been Prince Philip’s 100th birthday,” Jill Biden tweeted.

The first lady will head back to the U.S. before the president leaves on the next legs of his trip: Belgium and Switzerland where he will meet with Russian President Vladimir Putin.