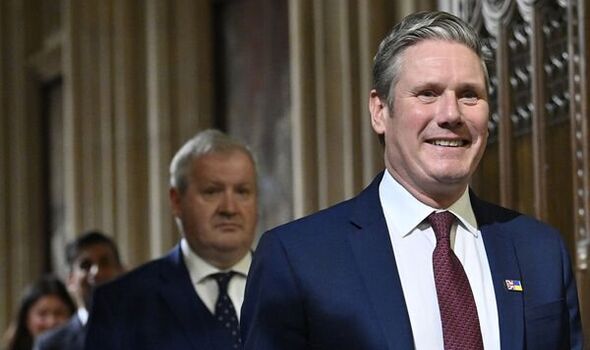 During a dramatic televised statement yesterday afternoon he announced he would do the “right thing” if a probe found he broke lockdown rules by having a beer and curry with activists.

He said: “I’m absolutely clear that no laws were broken, they were followed at all times.”

“I simply had something to eat while working late in the evening as any politician would do days before an election.”

“But if the police decide to issue me with a fixed penalty notice I would, of course, do the right thing and step down.”

Tories said Sir Keir’s resignation threat made it more difficult for Durham Constabulary, which is investigating the gathering in April last year after significant new evidence came to light.

Technology Minister Chris Philp said it was “deeply inappropriate that Sir Keir appears to be attempting to pressure the police into clearing him”.

Conservative MP Michael Fabricant said Sir Keir’s explanations for the gathering were not consistent and his statement “puts pressure on Durham police”.

Attorney General Suella Braverman said: “I think what Sir Keir is definitely guilty of is blatant hypocrisy, having criticised the Prime Minister and been subject to a similar investigation.”

Sir Keir was pictured drinking at an event in Durham before local elections. Around £200 worth of curry was also ordered in.

Mary Foy, Labour MP for the City of Durham, and Angela Rayner, Labour’s deputy leader, were at the gathering at Durham Miners Hall. Ms Foy denied reports that staff were drunk at the event.

Sir Keir, a former director of public prosecutions, refused to say if he would stand down if Durham Constabulary suggests he may have broken the rules but does not issue a fine, as it did with Dominic Cummings.

Ms Rayner issued a statement echoing Sir Keir’s: “If I were issued with a fine, I would do the decent thing and step down.”

A poll by Savanta ComRes found half the public believe Sir Keir broke the rules while a separate YouGov survey learned 46 percent think he should quit if fined.

Bookmakers were quick to give odds on who would be his successor, with Greater Manchester Mayor Andy Burnham 7/2 favourite to take over.

Sir Keir was locked in talks with advisers before the statement, having pulled out of a memorial service for the late Conservative MP James Brokenshire.

The Covid-19 Bereaved Families for Justice UK campaign group, which has been critical of the Government’s pandemic policies, said: “This is the right decision by Keir Starmer and, in contrast to Boris Johnson, shows integrity, decency and respect to the bereaved.”

“The pandemic isn’t over, and if, God forbid, a new vaccine-resistant strain should emerge, it’s essential we have a leader with the moral authority to introduce restrictions if needed.”

Having climbed on his high horse, Sir Keir Starmer is desperately trying to stay in the saddle.

But as his mount struggles badly, the Labour leader looks like he is heading for a fall, which is no more than he deserves for his hypocritical, unctuous sanctimony.

Puffed up with self-righteousness, Sir Keir thought his repeated denunciations of the Prime Minister for breaches of the Covid lockdown rules would bring down the Government.

But his strategy has backfired, largely because he now stands accused of the very same offence. So quick to condemn parties in Downing Street, the Labour leader has struggled to explain the nature of a gathering he attended in Durham last April, where a large number of guests reportedly enjoyed curries and beers.

Last week the Durham police announced that they are to hold a full investigation, a move that put Sir Keir in an awkward position, given that he had called for the Prime Minister to go when the Metropolitan Police announced their probe into No 10.

Yesterday, Sir Keir tried to regain the initiative. At a press conference, he declared that, in contrast to the Prime Minister, if he gets a police fine for a breach of lockdown at Durham, he would resign. He piously said that “of course, I will do the right thing. This is a matter of honour and principle for me”.

Yet, far from re-establishing him as a heroic champion of public morality, this intervention only dragged him further into the mud. He sounded as if he was trying to give himself the chance to escape on a technicality through his emphasis that he would quit if he receives a fine.

But what if the police convict him of breaking the rules, but do not give him a retrospective fixed penalty notice, exactly as happened in the notorious case of Downing Street aide Dominic Cummings?

Sir Keir’s emphasis on his own probity was equally unconvincing, given that he has continually obfuscated and misled the public over the Durham event.

Indeed there was an ugly streak of vanity about his shining references to his own moral compass. He likes to pretend that he is elevating the tone of political life, but he is doing the very opposite.

Yesterday’s announcement was a crude attempt to intimidate, not only Johnson, but also the police, as one of his allies admitted yesterday. It is frankly disgraceful the team around Sir Keir, a former director of public prosecutions, should be going down this path. Moreover, there is a dangerous lack of democracy about his shrill, finger-wagging approach.

The fate of the nation should be decided at the ballot box on great issues, not by police officers and bureaucrats hunting for past misdemeanours. Just as bad are the warped priorities. Our political leaders face huge problems which need all their focus, including the cost-of-living crisis, the war in Ukraine, the future of the union with Northern Ireland, the burdens on the NHS and the state of the public finances.

Yet, thanks partly to Sir Keir’s antics, far too much time is being swallowed up by Partygate. The Labour leader is engulfed in a mess entirely of his own making. His resort yesterday to jarring immodesty and self-important threats just reinforce the inadequacy of his judgment.

After this performance, many in his party will be hoping that he is forced to quit.