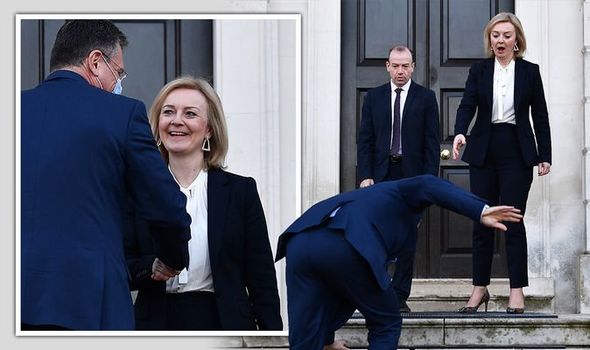 Ms Truss and her EU counterpart met today for her first meeting since taking over Brexit responsibilties from Lord Frost after he resigned from the role. But the meeting did not get off to a good start.

Mr Sefcovic was pictured slipping on an icy step while walking up to meet Ms Truss at Chevening House in Sevenoaks, in south London.

The pictures show the EU Commission vice president falling on the steps as he made his way up to Ms Truss.

The Foreign Secretary was photographed open-mouthed as Mr Sefcovic fell to the ground.

Mr Sefcovic recovered from his embarrassing tumble and Ms Truss welcomed him into the building for the Brexit showdown.

Last Sunday, Ms Truss pledged she would not “sign up” to anything that would not benefit the people of Northern Ireland.

In her column in the Sunday Telegraph on January 9, Ms Truss vowed to trigger Article 16 if the EU “does not cooperate”.

Triggering Article 16 of the Northern Ireland Protocol would allow one side to unilaterally suspend the rules of the treaty.

The Northern Ireland Protocol – agreed in the Brexit deal – is designed to avoid customs checks along the Irish border.

It means goods – including medicines – can flow freely between the Republic of Ireland and Northern Ireland.

However, goods arriving from the rest of the UK are subject to control to ensure they comply with EU standards.

Due to a “grace period”, controls have not yet been imposed on the movement of products.

The grace period was expected to expire in January but the UK Government has indefinitely extended it.

Former Brexit minister Lord Frost and Mr Sefcovic met on several occasions in a bid to resolve teething issues with the Protocol.

After taking over key aspects of Brexit negotiations from Lord Frost last year, Ms Truss said she will be “putting forward our constructive proposals to resolve” the ongoing issues with the Northern Ireland Protocol.

Ms Truss promised she would not “sign up” to anything that will not benefit the people of Northern Ireland.

In a Telegraph column, titled ‘I will trigger Article 16 if the EU does not cooperate’, Ms Truss wrote: “I am prepared to work night and day to negotiate a solution.