The Prime Minister said it was a time to be “bold” and there are “no cost-free options” as she set out an estimated £150 billion emergency package. Energy costs are being capped which means a typical household will pay around £2,500.

Wholesale costs will be limited to bring down bills for businesses and institutions such as schools, hospitals and churches for six months.

Ms Truss said failing to take action would harm the country and economy but she warned long-term supply issues must be tackled now as she announced the ban on fracking will be lifted.

She told the Commons: “This is the moment to be bold. We are facing a global energy crisis and there are no cost-free options.”

A total cost for the package will not be announced by the government until Chancellor Kwasi Kwarteng gives his first budget later this month.

But the measures are expected to reduce inflation by five per cent, in turn bringing down the cost of servicing the national debt. 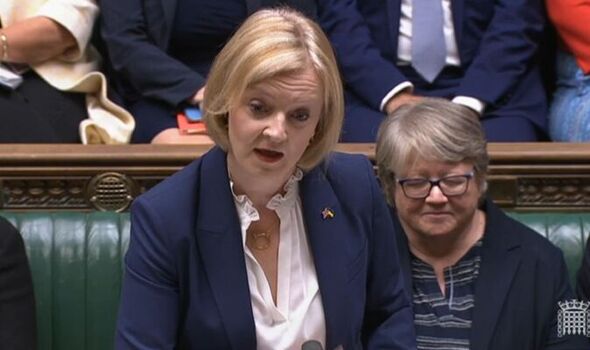 Ms Truss axed the cap and replaced it with a two year energy price guarantee that sets the limit for the cost of a unit of gas.

From October 1, average annual bills will be capped at £2,500 for two years, saving families an average of £1,000 a year, according to the government.

Already announced plans for a £400 energy bills discount and extra help for people struggling the most will continue this year but are not expected to be reintroduced in 2023.

The freeze factors in the suspension of green levies that are worth around £150 a household.

Details of the six month plan for business are still being finalised as the system is more complex but the government said support will be available to stop them facing costs surges of up to 500 per cent.

After that there will be ongoing help for the most vulnerable industries, with a review in three months’ time to decide where it should be targeted.

A fund will be set up for those using heating oil, living in park homes, or on heat networks.

Ms Truss said the historic intervention was needed after a failure to invest in home-grown energy was exposed by Russian president Vladimir Putin’s weaponisation of energy supply.

The Government will borrow billions from global markets to fund the deal.

Ms Truss said she wants the UK to be a net energy exporter by 2040.

She said: “This is part of my vision for rebuilding our economy – secure energy supply is vital to growth and prosperity, yet it has been ignored for too long.

“I will end the UK’s short-termist approach to energy security and supply once and for all.

“That is what I promised on the steps of Downing Street, today we’re acting decisively on that pledge.

“This will help us build a stronger, more resilient and more secure United Kingdom.”

Shevaun Haviland, Director General of the British Chambers of Commerce, said: “The BCC welcomes this quick and positive intervention from Government. It is clear the new Prime Minister has listened to firms and is providing a strong package of support for business, equivalent to the crucial support to consumers.

“We welcome the breadth of the offer to all non-domestic energy users with businesses, charities and public sector organisations to be included.”

National Chair of the Federation of Small Businesses Martin McTague said the announcement was a “huge relief” for millions of small businesses.

“Many have been pushed to the brink by crippling energy bills, and so it is welcome that help is on the way,” he said.

“The toxic combination of uncapped energy hikes, high taxes, inflation and negative growth have become an existential threat for many.

“Constricting the scale of energy bills for small businesses is unprecedented; we now have a high-level commitment in principle to help businesses get through the winter intact. Done right, this will be a lifeline – protecting jobs, communities and future economic recovery.”

Caroline Abrahams, charity director at Age UK: “Our initial reaction is that we recognise this is an enormous package of financial support for consumers from the Government, and an extremely welcome one as a result, but the question for Age UK is whether it targets enough financial help towards the pensioners we worry about the most: those with only a small amount of money coming in and who are totally dependent on the State Pension and means-tested benefits, as well as those with especially high costs, due to disability and ill health, or living in homes which are very costly to heat.”

Dennis Reed, director of over 60s campaign organisation Silver Voices, said: “Fixing the energy cap above its current level, without increasing the basic income of millions of state pensioners, is embedding a permanent cut in living standards and will not prevent a cost-of-living crisis this winter.”

Sam Hall, Director of the Conservative Environment Network, said: “The Prime Minister’s plan for an energy price guarantee will give welcome protection to families and businesses from sky-high gas prices caused by Vladimir Putin’s war in Ukraine.

“The huge price-tag for this unprecedented intervention lays bare the cost of our reliance on volatile and expensive gas.”

Morgan Vine, Head of Policy and Influencing at Independent Age, said the announcement would “provide some much-needed breathing space” to older people struggling with their energy bills.

Labour leader Sir Keir Starmer said Ms Truss’s refusal to fund the plans with a windfall tax is “driven by dogma” and will mean “it’s working people who will pay for that”.