While in El Paso and McAllen, Mayorkas plans to meet with local law enforcement, Homeland Security employees and immigration advocates about the nation’s migrant crisis, KFOX 14 in El Paso reported.

Neither President Biden nor Vice President Kamala Harris are scheduled to accompany Mayorkas to the border. Biden put Harris in charge of the crisis last month and although she said in late March she would visit the border “at some point” no trip has been publicly scheduled.

Mayorkas’ scheduled visit also follows Texas Gov. Greg Abbott’s call Wednesday for a San Antonio migrant housing facility to be shuttered amid allegations that some children living there have been sexually assaulted.

Mayorkas took a hard line on border security while speaking with Immigration and Customs Enforcement (ICE) employees last week, according to the Washington Times. He said he would fight sanctuary cities that don’t comply with the agency and wants to see an increase in deportations for illegal crossings. 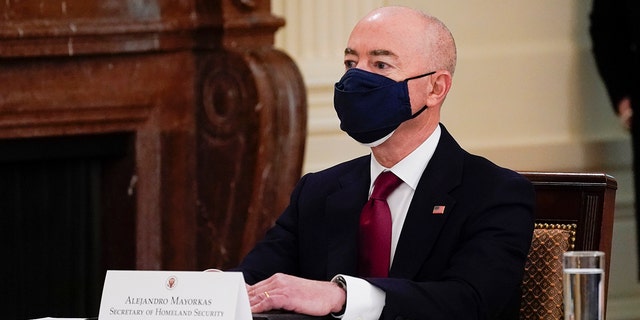 He said he is also considering filling in “gaps” in the border wall despite the Biden administration halting construction of one of former President Trump’s signature undertakings, the Times reported.

The Biden administration faces a continuing border crisis with a migrant surge that has led to images of migrant children packed at over-capacity facilities and families being released into the U.S.

This will be Mayorkas’ third trip to the area, KFOX 14 reported.