Merrick Garland had been testifying for three hours, fielding questions from members of the Senate Judiciary Committee about how he would lead the Justice Department if confirmed as attorney general. Then Sen. Cory Booker interrupted.

With his allotted time for questioning running out, the New Jersey Democrat said he wanted to take a step back.

Alluding to a past private discussion, Booker said during the late-February confirmation hearing that he was confident in Garland’s  “determination and conviction” to “go down as one of the great leaders when it comes to dealing with the daily unconscionable injustices faced by some Americans and not others at the hands of law enforcement.”

But Booker wanted Garland to address why—why he was intent on leaving a prestigious lifetime appointment to the federal bench to lead the Justice Department.

He asked Garland to address his aspiration “and maybe some of your own family history in confronting hate and discrimination in American history.”

Garland grew emotional almost instantly, choking back tears as he recounted his grandparents’ flight from anti-Semitic persecution in Russia.

It was the viral moment of Garland’s hearing. And looking on behind Garland, in a protective face mask and pale blue tie, was the bridge between Booker and the former judge: Matt Klapper.

After two decades at Booker’s side, in which he ascended from a volunteer on an early mayoral run in Newark to become one of the New Jersey Democrat’s longest-serving aides, Klapper stepped down as the senator’s chief of staff to shepherd Garland through the confirmation process.

With Garland’s Senate confirmation made official last week, Klapper is now serving as the attorney general’s chief of staff. It’s an important role that promises to make Klapper a constant at Garland’s side as he seeks to restore the integrity of a Justice Department emerging demoralized from a period in which Trump appointees were seen as intervening in criminal investigations and prosecutions to the benefit of the former president’s friends and allies.

Biden’s transition assigned Klapper as Garland’s “navigator” during the nomination process, based on his background in Booker’s office and with the Senate Judiciary Committee,  according to a person familiar with Garland’s confirmation process. As Booker’s top aide, he had been closely involved in the Senate on criminal justice reform, including legislation last year named after George Floyd following his death in the custody of Minneapolis police.

It was hardly assured that the pairing would lead to Klapper joining Garland at the Justice Department.  But the longtime Booker aide impressed Garland in the confirmation process. The incoming attorney general appreciated Klapper’s extensive background in the Senate and saw it as offering a skillset that would complement a veteran, devoutly apolitical judge with a professional aversion to Washington’s partisan battles, according to people familiar with his selection as chief of staff.

Klapper declined to comment through a Justice Department spokesperson. His former boss, however, was anything but shy in praising a trusted aide now working at Garland’s side.

“Matt just blew him away in that role, and Merrick made him the offer, which is pretty stunning,” Booker said in an exclusive interview with Insider on Thursday just hours after Garland took the oath of office to be sworn in as attorney general.

“But Matt is really one of the more talented human beings I’ve ever worked with, and it’s actually not stunning if you know Matt and how impressive he is,” Booker added. 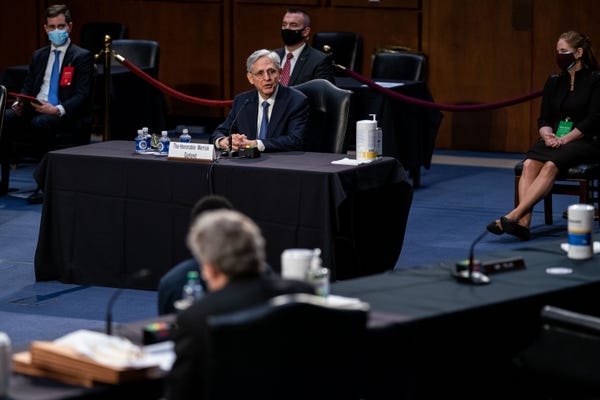 ‘A reputation on the Hill’

Before being nominated to the powerful US Court of Appeals for the DC Circuit, Garland was a career federal prosecutor in Washington. Garland later became a top Justice Department official under the Clinton administration who oversaw the investigation into the 1995 Oklahoma City bombing.

In his first public remarks as attorney general, ahead of a briefing on the deadly January 6 rioting at the Capitol, Garland called for a recommitment to norms “that require like cases to be treated alike” and said his return to the Justice Department felt like a homecoming.

Klapper, on the other hand, brings no prior Justice Department experience.

For other roles in his front office, Garland has turned to a pair of federal prosecutors with experience in civil rights cases and three former clerks, including Kate Heinzelman, who is serving as his chief counsel, as first reported by Insider.

Klapper will face an early challenge learning the inner workings of the Justice Department but is expected to draw from his experience running Booker’s Senate office. For a veteran judge known among his clerks for keeping his chambers free of any whiff of partisan or results-minded thinking, Klapper is expected to serve as the political eyes and ears and leverage relationships on Capitol Hill.

That’s where he garnered a reputation as a gregarious personality with credibility across the aisle and with advocates for criminal justice reform, a top priority for the Biden administration.

“I do think Matt has that ineffable quality and strength of understanding people, understanding how things work and having the right instinctual reaction to things. It’s an important sounding board to have in the attorney general’s office,” said Will Levi, who served as chief of staff and senior counselor to former Attorney General William Barr in the Trump administration and, as chief counsel to Utah GOP Sen. Mike Lee, once worked in the Senate with Klapper.

“Matt has a reputation on the Hill. He is known among the offices on the Hill, across the aisle, as just a wonderful person to work with and as a straight shooter,” added Levi, who also attended Yale Law School with Klapper. “At the end of the day, he’s proved his mettle over the past decade. He’s the kind of guy you want in your corner when things are moving fast and hard decisions have to be made.” 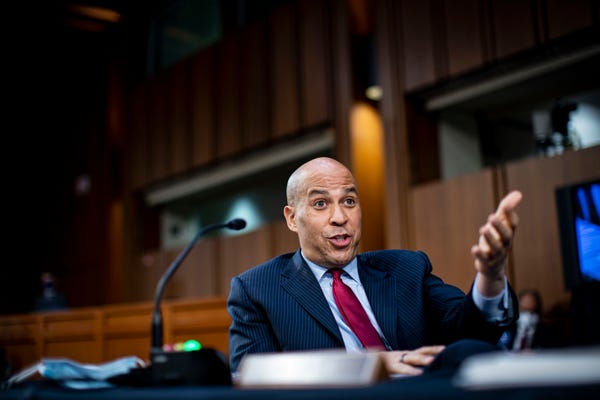 Klapper brings to Garland’s office a background putting out fires — the literal ones.

In his years working with Booker, he earned not only his undergraduate and law degrees but also certification to work as a full-time firefighter in New Jersey. It was a process that required more than eight years of volunteering at a fire department and serving with an ambulance squad, the Pennsylvania Gazette reported in 2014.

In 2011, the year he became chief policy advisor in Booker’s mayoral office, Klapper accepted a job at a firehouse five miles west of Newark. For the next two years, he took no salary from the city of Newark, supporting himself instead with income from his full-time job as a firefighter and part-time work at the Brookings Institution.

“Being a firefighter is my childhood dream come true. Being policy advisor to Cory was my dream job,” Klapper told the Pennsylvania Gazette. “Declining to take a salary from the City of Newark, in the wake of extensive lay-offs, was a way to do everything I loved at the same time.”

Klapper joined Booker’s office as a senior policy advisor when the Newark mayor won election to the Senate in a 2013 special election. In 2014, he left his New Jersey firehouse after becoming Booker’s chief of staff.

Booker, who first met Klapper on a visit to his high school during his junior year, described his longtime aide as  “mega-nerd who’s also an extraordinary diplomat.”

“And then he’s just driven with this moral compass, a fierce view of the need for justice in this world,” Booker told Insider. “Like Merrick Garland, these are two Jewish men who really do live in accordance with the highest Talmudic principles. That combination is pretty extraordinary: a brainiac guy who people love to work with and can navigate complicated politics and still find a chord, still find common ground.”

Booker said that moral compass has come into play in ways large and small amid the coronavirus outbreak. Last year, when the New Jersey Democratic governor issued a call for retired or inactive medical professionals, Klapper reprised his former role and moonlighted as a volunteer EMS worker.

“The most impactful thing of having these dual experiences was just seeing the expanse of how this virus is hurting people,” he told the New York Times. “There are millions of first responders who are going to be answering these calls for months, if not longer. This is something that doesn’t stop at the door of work. It is going to come home.”

But his training could not overcome the short supply of critical household items in the early months of the pandemic.

Booker recalled that, on a run to Whole Foods in the “middle of the pandemic,” he was asked by Klapper to pick up some toilet paper. When he realized the store had run out, Booker suggested that Klapper take some from the Senate office.

“He was like, ‘Cory, that’s government property. I cannot take toilet paper from the office,'” Booker recounted. “That’s how much of a Jiminy Cricket guy he is … He’s one of these rare people that lives with such a high frequency of integrity.”

Booker had questioned Garland at his confirmation hearing and voted him out of the Senate Judiciary Committee. On Wednesday, he joined with 69 other senators to confirm Garland as attorney general.

On Twitter, he marked the occasion with a years-old photograph showing him beside Klapper with an arm draped over his longtime aide’s shoulders.

“With today’s confirmation, he’ll officially serve as AG Garland’s COS,” Booker tweeted, referring to the chief of staff role. “I’m so proud of him.”